Posted in: No Huddle by Gino Sassani on September 19th, 2017 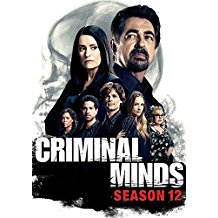 The 12th season of Criminal Minds would be one of great change. Some were expected and some were not. There had been incidents behind the scenes that had drawn red flags among the cast. Thomas Gibson was known to have a temper and had been reprimanded for it in the past. But as the Season 12 shooting began, he crossed the line again by allegedly kicking a writer. It was the last straw, and he was quickly fired from the series. So while the season begins with his character, it only lasts a short time. This is also the first season without Shemar Moore as Derek. That exit was planned and dealt with at the end of the previous season. And while everyone else returned, there was an unexpected return to the cast. Paget Brewster returned as Prentiss in what was originally intended as a short run. The sudden loss of Gibson created an opportunity to promote the character into his spot. Of course Brewster isn’t the first to leave and return later. Jennifer Jareau had left for a while and returned to the fold. And while Moore does make a cameo this season and could return, don’t expect to see Thomas Gibson on the show again.

As some doors close, others open. Adam Rodriquez from CSI: Miami joins the cast as Agent Luke Alves.  The character comes over from a fugitive task force and has a bit more of an aggressive style than the team is used to. He’s a loner who lives alone with his dog. So we also get a rather pretty dark German shepherd in a recurring role this season. His addition certainly shakes things up in the character front. Another new face is Damon Gupton, who plays Agent Stephen Walker. He’s the direct opposite of Luke. Stephen has a wife and kids and winds down by playing the trombone. To say he jazzes up the cast would be an understatement. But how well do these new characters fit in?

They are obviously a change from the kind of characters we’ve seen on the show and honestly do take a bit of time getting used to. NCIS also had a large cast change, but they appeared to find that chemistry much sooner. It isn’t helped by the fact that fan favorite Matthew Gruber’s Reid character has a very odd arc this season. He spends quite a bit of the season in prison. Of course, he’s innocent, but they milk it over several episodes. There’s some dramatic stuff to be mined here, but it was far too drawn out for me. It appears Gruber will be the next actor to depart the show. While he’s my favorite, he appears to be tiring of the show, and this arc was offered to him in order to keep him on the show this year. Combined with more chances to direct, it bought the show another season, but I suspect the end is in sight.

The season does begin with a hold-over arc. Remember the big prison break? There are multiple bad guys out there on the streets again that the team must recapture. Perhaps the creepiest and most interesting is the big story of Mr. Scratch, played by Bodhi Elfman, and Aubrey Plaza as Cat Adams. It’s the most intricate arc the series has ever covered in a season. Unfortunately when you look at that and Reid’s long story, this season never feels quite like classic Criminal Minds. It was a tough start for everyone associated with the show, and hopefully they can get back on their feet again for lucky Season 13.

You get all 22 episodes on six discs with a few extras that include deleted scenes, season summary, gag reel, director journals, and new characters. While not one of the strongest seasons to date, I’m left with the thought that there might be “a glimmer of hope”.

Gino Sassani is a member of the Southeastern Film Critic's Association (SEFCA). He is a film and television critic based in Tampa, Florida. He's also the Senior Editor here at Upcomingdiscs. Gino started reviewing films in the early 1990's as a segment of his local television show Focus. He's an award-winning recording artist for Omega Records. Gino is currently working on his 8th album Merchants & Mercenaries. Gino took over Upcomingdiscs Dec 1, 2008. He works out of a home theater he calls The Reel World. Favorite films: The Godfather, The Godfather Part II, The Body Snatcher (Val Lewton film with Karloff and Lugosi, not the pod people film), Unforgiven, Gladiator, The Lion King, Jaws, Son Of Frankenstein, The Good, The Bad And The Ugly, and Monsters, Inc.
Tuesday Round Up: September 12 and 19, 2017 The Mummy (2017) (Blu-ray)