Posted in: Disc Reviews by Archive Authors on September 19th, 2017 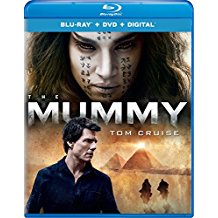 “Death is but a doorway to new life. We live today. We shall live again. In many forms shall we return.” – Egyptian Prayer Of Resurrection.

In ancient Egypt there is a princess, Ahmanet (Sofia Boutella), who will inherit the entire kingdom when her father dies. She has remarkable fighting skills, amazing beauty, and has the ability to lead the people. But her father remarries, and soon after their first son is born her legacy changes. What soon follows will seal Ahmanet’s fate that’s worse than death.

Nick Morton (Tom Cruise) and Chris Vail (Jake Johnson), full time soldiers and part-time treasure hunters, are currently in Mesopotamia (Iraq), searching for ancient artifacts. Under instruction from Colonel Greenway (Courtney B. Vance) of the United States military, these two are secretly following a map that Nick stole from Jenny Halsey (Annabelle Wallis), an archeologist. Jenny is searching for an ancient tomb buried outside Egypt’s boundaries to better understand why this Egyptian burial occurred so far away.

After running into an Iraqi hideout far in the desert, these two heroes, Nick and Chris, must battle their way out of danger. In doing so they open a hole that leads into a cavern under this abandon city. What they find is the secret Jenny has been looking for and an adventure they did not expect.

In London, Dr. Henry Jekyll (Russell Crowe) is a wealthy businessman and scientist who is in search of this major find that Chris and Nick discovered. He welcomes their discovery and encourages them to support his beliefs. What they unearth is the key to uncovering the real mystery behind the Mummy.

Director Alex Kurtzman attempts to make a reboot of The Mummy series and ends up with an average film. He doesn’t develop any real chemistry between the characters, and the narrative buildup misses its target. The special effects were used before, and they are absent of any real creativity. His efforts bring an enjoyable tale that is worth seeing, however, especially if you are a Tom Cruise fan or an action junkie. The acting is performed well by all, especially Sofia Boutella as the vengeful Egyptian princess.

This action-packed reboot does not seem to live up to its predecessors. It uses the special effects from the previous Mummy stories with no real evidence of any improvement. The story lacks any true imagination and seems to try to introduce some sort of future lead-in to a possible movie series, The Creature of the Black Lagoon, Dracula, The Wolf Man, and Dr. Jekyll and Mr. Hyde, to name a few possible targets.

The Mummy is presented in its original aspect ratio of 2.40:1. The 1080p image is arrived at with an AVC MPEG-4 codec at an average 35-40 mbps. You get an interesting mixed bag with this release. There’s actually a rather nice film-like quality to the presentation that delivers a welcome bit of grain. Colors are often a bit dull, but that’s clearly the intended style. The creature herself is pale and full of earth-tones. Of course there’s a lot of sand. Colors do get the opportunity to pop when we are more firmly in the modern world where they become more natural and even rich. Explosions are quite dynamic. The underwater scenes are rather well done and offer the necessary murky quality yet remain nice and sharp. Black levels are actually pretty good, and while not really providing the inky blacks you might be hoping for, there is still a lot of clarity and nice shadow definition.

The Dolby Atmos translates to an active 7.1 audio presentation. This is where the film proves itself to be more action film than horror movie. There’s a near-constant barrage of explosions and gunfire. You have windows shattering, earth quaking, and of course, the early extended plane crash. The score isn’t a subtle atmospheric work. It’s a rousing adrenaline force of nature to match the visuals. You can pick up the dialog easily enough in all of the mania. There aren’t many quiet moments here, and the surrounds continue to be aggressive throughout. The subs are going full-force through most of the film and provide some room-shaking moments, to be sure.

Deleted & Extended Scenes: (4:52) There are four with a play-all option.

Cruise And Kurtzman – A Conversation: (21:15) The two sit and talk about the film. They share a lot of laughs. There are clips from the film as well as some from original Universal monster films.

Rooted In Reality: (6:53) Cast and crew talk about the production design as well as the choice to make the film in contemporary times. There’s plenty of conceptual art, storyboards, set construction, and story discussions.

Life In Zero-G – Creating The Plane Crash: (7:33) A behind-the-scenes look at filming on the Zero-G “Vomit Comet” where they filmed the sequence 22 seconds at a time in actual Zero-G conditions.

Meet Ahmanet: (7:39) A character profile on the film’s featured creature and the actress.

Cruise In Action: (6:09) This is an absolute Tom Cruise love-fest. We see how he worked with the stunt director, who has been with Cruise for several films.

Becoming Jekyll And Hyde: (7:10) This feature focuses on the Dark Universe’s “Fury” character and on Russell Crowe. A lot of this looks at the stunt work for the fight with Cruise.

Choreographed Chaos: (6:35) Go behind the scenes for the big climax and see how the stunts were done. This stuff clearly demonstrates that Tom Cruise was the film’s actual director. He’s the one addressing cast and crew all of the time. He’s giving direction and demonstrating moves for the other actors.

Nick Morton – In Search Of A Soul: (5:43) A profile on the lead and his relationships in the film.

The Mummy has a good storyline, decent special effects, and effective action sequences.