Posted in: No Huddle by Gino Sassani on September 22nd, 2017 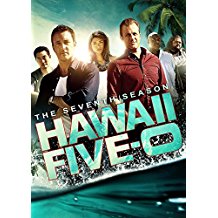 It’s been seven years since we started to hear that phrase again. Before 2010, it had been 30 years. Still it persisted in the modern lexicon along with the term Five-0, which is still shouted in high-crime areas in cities all over the country whenever a police presence is felt closing in on the bad guys. Hawaii Five-0 ended in 1980. That’s when Tom Selleck took over the sets and production crew on Hawaii to work as Magnum P.I. until 1988 when it all closed down for good — or did it? Wouldn’t you know it, the show has been resurrected and become the hottest drama on television. A younger Steve McGarrett and company are back in action and Hawaii …the world might never be the same again. Not sure what I’m talking about? You’ve got six seasons of the new Hawaii Five-O to catch up on. Let’s give you the quick 411. Roll wave… Click Here.

They don’t waste any time getting you into the action in this 7th season. There is a single story arc that will drive many of the season’s episodes. There’s a serial killer on the islands, and they appear to be taking out other killers. It’s not Dexter, but coincidentally enough Dexter star Julie Benz gets a bit more work this season in her recurring role of Inspector Abby Dunn. The killer’s signature is to put chess pieces from an ancient set in the mouths of the victims. The story arc brings us two recurring characters, both playing psychologists. Claire Forlani plays Dr. Alicia Brown. She is a retired profiler who is brought on the case reluctantly by Steve. She also serves as a bit of a love interest for him this season. The other is Law & Order veteran Elisabeth Rohm, who could be connected to the case in some way. Of course Steve ends up right in the thick of it and is targeted by the killer.

There are some bittersweet finishes on the show this season. The truth is there will be big changes coming in the future. Masi Oka, the f/x technician turned actor on Heroes wraps up his time on the show as a medical examiner. Dr. Max Bergman is leaving to do work in Africa and has a rather tearful goodbye mid-season. We’ll see the actor next in the decades-long in development shark film Meg. This departure was planned. But this will also be the last season for both Daniel Dae Kim, who plays Chin Ho Kelly, and for Grace Park, who plays his cousin and fellow team member Kono. The two made demands to be paid the same as series leads Alex O’Loughlin and Scott Caan. While this is certainly very much an ensemble cast, there isn’t much doubt that these are the show’s leads. Someone has to lead the call sheet, and there isn’t going to be enough money to give them all equal shares. There were rumblings of racism because the leads were white and these actors were Asian. I think it’s likely a stretch, and Kim made out just fine almost immediately landing a role in the new ABC drama The Good Doctor. I suspect he had that offer in his back pocket the entire time. I just hope that Grace Park didn’t end up losing her gig in a sense of solidarity that might have been misplaced. Whatever the internal politics, the series will not be the same without them.

The first episode of the season starts with a rather bizarre encounter. Steve is recovering in the hospital and doing some introspection in the hospital chapel. There he encounters a character who can only be described as the ghost of Jack Lord, who played the title character in the original series. The show received the blessing of the actor’s estate, and there’s no mistaking the look. The problem is that he appears rather zombie-like. I don’t know if it was intentional or a product of television-budget CGI. It’s not quite up to snuff of the Star Wars creation of a Peter Cushing character last year. It was a sweet moment and a noble idea, but it ended up being a little creepy.

There are plenty of interesting cases. The team encounters a real-life James Bond agent who is a suspect in a murder but ends up teaming with Five-O. He acts very much like Bond but looks uncannily like Frank Sinatra. The show goes back in time in an episode that looks at the JFK assassination. You know this is a Jerry Ortega story. His friend is killed just as she believes she’s going to prove it was JFK’s own cabinet that had him killed. She was in Hawaii to investigate a secret meeting of the cabinet in Hawaii during that fateful moment in history. So we flash back to 1963 and explore what those guys were doing while Kennedy was getting shot.

This year it’s Ron Underwood who directs the Halloween episode. Hawaii Five-O has had a pretty solid reputation of going all out on these, and Season 7 is no exception. The team investigates a house that has been believed haunted for decades. Steve recounts his own father’s story of crazy things from the 1950’s. It’s now owned by a disgraced psychic who is killed under mysterious circumstances. Max gets to rock his last Keanu Reeves costume, and Jerry is left to take Danny’s kids trick-or-treating.

The character chemistry is why this show continues to work as well as it does. Television show reboots have a high failure rate, but this one might last longer than the 12 seasons of the original show. If it does, it’s going to be those character moments that make it happen. There was a crossover with another rebooted series. Kono and Kim leave the islands to have an adventure with the new MacGyver, but that episode is not included here. There’s no real reason as it does not spill over into any events of this show. It’s referenced and nothing more.

You get all 25 episodes on six discs with a gag reel, season summary, and two short features. In the intro I suggested you catch up on the earlier episodes, but with this series it’s not quite essential. You can quickly follow along, and most episodes work on their own. The arc that does carry over is contained within this season. If you do want to catch up, you’d better hurry. The new season begins in just days. “You’ve got an expiration date. In fact, the milk in my fridge has got longer than you.”

Gino Sassani is a member of the Southeastern Film Critic's Association (SEFCA). He is a film and television critic based in Tampa, Florida. He's also the Senior Editor here at Upcomingdiscs. Gino started reviewing films in the early 1990's as a segment of his local television show Focus. He's an award-winning recording artist for Omega Records. Gino is currently working on his 8th album Merchants & Mercenaries. Gino took over Upcomingdiscs Dec 1, 2008. He works out of a home theater he calls The Reel World. Favorite films: The Godfather, The Godfather Part II, The Body Snatcher (Val Lewton film with Karloff and Lugosi, not the pod people film), Unforgiven, Gladiator, The Lion King, Jaws, Son Of Frankenstein, The Good, The Bad And The Ugly, and Monsters, Inc.
Supernatural: The Complete Twelfth Season (Blu-ray) Lethal Weapon: The Complete First Season (Blu-ray)