Posted in: Disc Reviews by Gino Sassani on September 21st, 2017 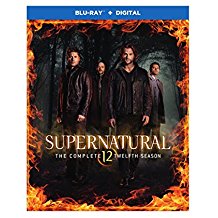 “Don’t you get it? This is all meaningless. Heaven, hell, this world if it ever meant anything, that moment is passed. Nothing down here but a bunch of hopeless, distraction addicts, so filled with emptiness, so desperate to fill up the void. They don’t mind being served another stale rerun of a rerun of a rerun.”

No stale reruns here. Season 12 of Supernatural picks up exactly where the previous year left off. The brothers are not together at the moment. Dean has just helped out God’s sister and gets a pretty sweet gift in return, while Sam’s at the bunker and is surprised by a British lass with a gun. She shoots him, and it’s off to join these stories into another wild year with an addition to the Winchester family. Who the heck are the Winchesters, you’re asking yourself. Man, this is going to take some time, like about 200 hours of time, to get you up to speed. You can’t start here, that much is certain. You can find a ton of our Supernatural reviews here Supernatural Reviews, and then you need to cash in those Amazon rewards points to pick up the previous seasons. Once you’ve done that, you can join us back here, because there’s more to the story.

Samantha Smith has been playing Mary Winchester, Dean and Sam’s late mother, since the pilot 12 years ago. These appearances have usually been short little moments and usually involved her plastered to the ceiling and on fire. So she’s never really had the opportunity to be a constant presence on the series even though that oft-repeated ceiling incident is the driving force that really set the show in motion, making the brothers the men they are now. So God’s sister Amara (Swallow) decides to reward Dean for his help by returning Mary back to life. You might ask yourself how a show like this can stay fresh over so many years. This is exactly how you do it. Mary, while a familiar face, is a new dynamic for the new season. She’s a fish out of water. She’s been dead for over 30 years, so she doesn’t recognize cell phones and laptop computers. She doesn’t really even know her sons. Dean was just a child and Sam an infant when she died. All of this adds wonderful new elements of relationship to the new season.

Getting back to Sam’s problem, he’s been shot by Lady Tony Bevell, played by Elizabeth Blackmore, just one of a group of new faces who also freshen things up again for the season. Bevell is from the British Men Of Letters who haven’t been too happy with the state of American hunters. So they’ve come across the pond to force their way of doing things on the American scene. Any hunters who won’t sign up are eliminated just like they were supernatural monsters. Sam, Dean, and Mary are going to find themselves in the middle of this mess, and while the relationship shifts from bad to good to bad, it’s going to end badly. The new group brings new faces. Arthur Ketch is the Mr. Fixit member of the group. He’s played by David Haydn-Jones and is as ruthless as any of the demons we’ve encountered. They do not believe in leaving loose ends. Mick Davies is the calmer-headed member of the new British Invasion. He’s played by Adam Fergus. He’s someone the boys might be able to work with.

There are some other lingering issues this season. Lucifer is still out of his cage, and Crowley Sheppard is on his tail trying to keep his Hell kingdom and followers. For much of the season Lucifer inhabits the body of an aging rock star named Vince Vincente, who is kind of a cross between Alice Cooper and Rick Springfield. The character is played by… well… Rick Springfield. It’s a wonderful recurring role that honestly doesn’t get as much play as it should. He delivers one of the show’s best dialogs (see intro quote). Apparently, there was fan backlash to see actor Mark Pellegrino return, and Lucifer eventually finds himself back in his old body. This is pretty much Crowley’s story for the season and sadly sees the end of that character on the show. Mark Sheppard will not be back, at least not in a regular role on the season, and that’s a huge loss as far as I’m concerned. He’s hands-down the best supporting actor in the show’s 12-year history with the possible exception of Jim Beaver as Bobby, who also makes a little cameo once again. So there’s hope we will see Sheppard again at some point.

For Castiel (Collins), it’s not a strong season, at least not until towards the end. Another arc of the season involves the impending birth of Lucifer’s child and the bad things that can portend. Castiel’s story is pretty much wrapped up in that arc, and he’s gone for many episodes in the season. The bad news is that he doesn’t really have the same kind of screen time with Sam and Dean that you might be used to seeing. That’s a great chemistry and a little bit of a loss for the season. Of course, Mary takes the place as the more common third wheel for the brothers this year. Courtney Ford plays Kelly Kline, who is carrying the demon baby. It’s a bit of a bad choice of character names, as I thought of Patsy Kline every time they mentioned her name.

While there are these big arcs that involve the British Men Of Letters, Lucifer, and his child, much of that plays out in the background of the season. I’m happy to report that the show did a little bit of a return to its roots this season. There are far more standalone episodes, and while most do contain elements of the big stories, they don’t dominate quite as often. One of the best of those individual episodes has the boys up against Adolf Hitler himself. Turns out that crazy Nazi cult we encountered before has been searching for the sole surviving member of Hitler’s family. They need her blood to release Hitler’s essence into a new body. The boys also end up in real trouble when Lucifer leaps into the President of the United States, and they get caught trying to kill him. You can’t make this stuff up. Oh, wait. Yeah, I guess you can.

The Winchester Mythology – Mary Winchester: (9:48) Take a look at the character over the years and see how her return impacts the show’s 12th season.

The Winchester Mythology – A Hunter’s Life: (15:40) The Brits don’t like the way it’s done here. Take a closer look into the life of a hunter.

The Winchester Mythology – The British Men Of Letters: (14:58) Are they good guys? Are they bad guys? See what they’re about in this feature.

Supernatural just keeps rolling along to the tune of classic rock and on the wheels of a jet black 1967 Chevy Impala. It’s all become somewhat iconic over the years. This is certainly one of the more stylish and atmospheric shows on television. We’re all looking forward to a 13th season. I suspect the executives will want to make it something special. The show will also deliver its 300th episode in that season. And what will we do? We’ll keep on watching. “It’s what we do, man.”

Gino Sassani is a member of the Southeastern Film Critic's Association (SEFCA). He is a film and television critic based in Tampa, Florida. He's also the Senior Editor here at Upcomingdiscs. Gino started reviewing films in the early 1990's as a segment of his local television show Focus. He's an award-winning recording artist for Omega Records. Gino is currently working on his 8th album Merchants & Mercenaries. Gino took over Upcomingdiscs Dec 1, 2008. He works out of a home theater he calls The Reel World. Favorite films: The Godfather, The Godfather Part II, The Body Snatcher (Val Lewton film with Karloff and Lugosi, not the pod people film), Unforgiven, Gladiator, The Lion King, Jaws, Son Of Frankenstein, The Good, The Bad And The Ugly, and Monsters, Inc.
Wonder Woman (Blu-ray 3D) Hawaii Five-O (2010): The Seventh Season