Posted in: Disc Reviews by Gino Sassani on September 22nd, 2017 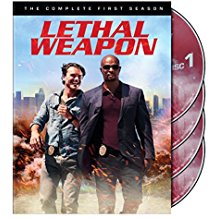 When I first heard that the Lethal Weapon franchise was moving to television, I had very mixed reactions. Like most fans of the films, I remained hungry for more. My hopes of future films were dashed around the time Mel Gibson began his career as a Hollywood pariah and was abandoned by many in the industry. I guessed almost immediately that the films were over, at least for a very long time. You go through the usual stages of grief, and about the time I reached the acceptance stage, Matthew Miller comes along and decides to revive the franchise for the small screen. At first I was thinking, yes, this is great. Moments later it was more like Why. Apparently I had a few more stages to get through after all. The final stage was really watching the show on Blu-ray from Warner Brothers. And no matter what I say here, that might just be the only way you’re going to be able to figure this out for yourself. All I can do is act a bit like a guide.

Lethal Weapon has been and still is about the two main leads. We’re talking about Martin Riggs, who was played by Mel Gibson in the films and is now played by Clayne Crawford, and Roger Murtaugh, originated by Danny Glover in the films and now portrayed by Damon Wayans. At the heart of things these are the characters you have come to know and love in the films. But they are different in many ways. The pilot episode introduces us to each of them in their “native” element before bringing them together for their 18-episode first season adventure.

Riggs is no longer an Aussie. He’s a Texan and like Gibson’s Riggs he has lost his wife but there is much more to that story here. Miller has complicated this loss so that elements of it can be used to carry the back-story and future episodes. His wife Miranda was killed in an auto accident while on the way to the hospital to deliver their first child. The loss sends Riggs into a downward spiral of drinking, drugs, and self-destructive behavior. His father-in-law (Plana) is a district attorney for L.A. and uses his connections to get him a job on the LAPD in the hopes that he can help him to recover from their shared loss. Needless to say there is far more to the story of Miranda’s death than meets the eye, and it is explored throughout the season. What Riggs eventually learns will send him to Mexico at season’s end in a cliffhanger that’s sure to drive the start of Season 2.

Gibson’s Riggs was suicidal, but in a Woody Allen kind of fashion. You never really took him seriously. This Riggs is generally far darker. There are scenes in this season that take these dark thoughts to places Gibson’s character could never have gone. While it leads to the character’s familiar recklessness, it’s not nearly as humorous as in the films. This Riggs is more Johnny Depp than Mel Gibson.

Roger Murtaugh is still the aging detective thinking about finally getting out. This time he’s recovering from a heart attack. He’s still the family man, but this Trish (Sharp) is not the stay-at-home Mom of the movies. She’s a top-flight criminal defense lawyer who is the household’s real breadwinner. While she’s still the one who wants to “save” Riggs, she’s a much bigger force of nature than anything in the films. Unfortunately, Wayans has a hard time keeping a grin off his face. When he’s acting tough, he can’t sell it like Glover did. Wayans is not used to being the straight man, and it strains the chemistry between the characters. I would much rather Roger not be smiling and trying hard to hide it so much. It’s the biggest flaw in the series.

Kevin Rahm plays Captain Avery, who is a far cry from the film captain. He’s gentle, gay, and used to be Roger’s partner before his promotion and Roger’s heart attack. He’s the balance between authority and very much wishing he were part of the action. Riggs was forced on him, but the guy grows on the young captain.

There are some interesting characters, but many of them are underused. Jordana Brewster is quite good as Dr. Maureen Cahill. She’s the department shrink who has the unenvious job of trying to counsel Riggs. Johnathan Fernandez is the forensics expert who goes by the name of Scorsese because of his penchant for drama and creating documentary-like presentations. Richard Cabral is terribly underused as Detective Alejandro Cruz. He is a former gang member who still has the tattoos. He’s embarrassed about his gang affiliations and is quite determined to prove himself. His partner is Detective Sonya Bailey, played by Michelle Mitchenor. Again she’s underused and could add a lot to the show.

One film character who does not work is a one-episode introduction to Leo Getz, the manic-paranoid character played by Joe Pesci in the later films. Thomas Lennon isn’t up to the task. I give him a lot of credit for not trying to do a straight-out imitation of Pesci. That was absolutely the best path to take. Still, this was an impossible character to recast and it might have been smarter to let it be.

For the most part the series is an action/adventure buddy-cop show. Taken in that light, there are many good things to like about it. The stunt work and f/x are high quality for a television show. This is an ambitious group who even reproduce some of the more iconic stunts of the films. The most notable was having Roger drive a truck through a house. Take it from a guy who actually did have someone drive a car through his house; this is the kind of thing that gets the old adrenaline pumping. The cases are big and exciting enough that the 40 minutes moves rather quickly. With just a few tweaks, this could be a solid performer and a way to keep the franchise alive just in case Gibson and Glover ever … never mind. That’s just not going to happen.

Each episode is presented in its original broadcast aspect ratio of 1.78:1. The 1080p image is arrived at with an AVC MPEG-4 codec. The show actually looks pretty good. The high-definition image presentation is quite natural. Colors pop when they need to, and when I say pop, I mean fiery red-orange explosions that are quite brilliant. Black levels are average. There are six episodes per disc, so you’re not going to get the kind of inky blacks and shadow definition a show like this could take advantage of easily.

The DTS-HD Master Audio 5.1 is more aggressive than your usual standard television menu. Subs dominate in a way few series can deliver. Expect a lot of room-shaking if you have the equipment to handle it. Dialog is always pretty clear. For the most part you get a dynamic and clean audio presentation throughout.

Reloading Lethal Weapon: (15:41) Actor Johnathan Fernandez sits with Matthew Miller and Jennifer Gwartz to talk about the task of re-imagining the film franchise into a television show.

This season has seen quite a trend of popular and classic films being moved to the small screen. In addition to Lethal Weapon we’ve seen films like The Exorcist and a franchise like Taken made into television shows. For me, the jury is still out on this one. It’s certainly an enjoyable show with good production values and writing. I’m still not sold on the characters. It’s tough when they have been so iconically played before. I’m all for giving it a chance, and I’m sure in time as it becomes more of its own thing, I will be more comfortable. As it stands, the number of television shows continues to grow as more outlets produce even more stuff. This time of the year that means a lot of time in front of a television to review them. How many? “Let’s just say it’s a long list.”

Gino Sassani is a member of the Southeastern Film Critic's Association (SEFCA). He is a film and television critic based in Tampa, Florida. He's also the Senior Editor here at Upcomingdiscs. Gino started reviewing films in the early 1990's as a segment of his local television show Focus. He's an award-winning recording artist for Omega Records. Gino is currently working on his 8th album Merchants & Mercenaries. Gino took over Upcomingdiscs Dec 1, 2008. He works out of a home theater he calls The Reel World. Favorite films: The Godfather, The Godfather Part II, The Body Snatcher (Val Lewton film with Karloff and Lugosi, not the pod people film), Unforgiven, Gladiator, The Lion King, Jaws, Son Of Frankenstein, The Good, The Bad And The Ugly, and Monsters, Inc.
Hawaii Five-O (2010): The Seventh Season Silicon Valley: The Complete Fourth Season (Blu-ray)