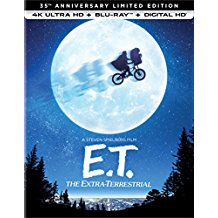 Thanks for sticking with us as we work to get back on schedule here. Our buddies over at Universal want to help us thank you for your loyalty. They’ve given us a copy of one of the most iconic films of all time, and it’s in 4K on UHD Blu-ray. This is one of the best prizes we’ve had in a long time, to be sure. Yes, we’re giving away a copy of E.T.: The Extra-Terrestrial in UHD. Now, you have to make sure that you have a UHD player and a 4K television with HDR, or you won’t be able to play the 4K disc. If you’ve been waiting for an excuse, this Steven Spielberg classic is pretty good motivation. This one is worth phoning home about.

Gino Sassani is a member of the Southeastern Film Critic's Association (SEFCA). He is a film and television critic based in Tampa, Florida. He's also the Senior Editor here at Upcomingdiscs. Gino started reviewing films in the early 1990's as a segment of his local television show Focus. He's an award-winning recording artist for Omega Records. Gino is currently working on his 8th album Merchants & Mercenaries. Gino took over Upcomingdiscs Dec 1, 2008. He works out of a home theater he calls The Reel World. Favorite films: The Godfather, The Godfather Part II, The Body Snatcher (Val Lewton film with Karloff and Lugosi, not the pod people film), Unforgiven, Gladiator, The Lion King, Jaws, Son Of Frankenstein, The Good, The Bad And The Ugly, and Monsters, Inc.
Silicon Valley: The Complete Fourth Season (Blu-ray) The Big Bang Theory: The Complete Tenth Season (Blu-ray)