Posted in: Disc Reviews by Gino Sassani on September 23rd, 2017 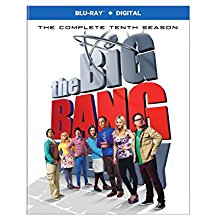 Mixing science with comedy appears to not only be funny; it also has some serious staying power. It’s been 10 years since Big Bang Theory first exploded on our television screens. The show continues to be one of the highest-rated comedy shows on television and seems to be going strong. The show takes the time and money to employ actual science consultants, so you might even learn something along the way. The secret to the show’s success is that it’s a situation comedy that really manages to be about the characters. All of that geek and science talk is background music to the main theme, which continues to be the characters and their relationships. Watching the 10th season I found myself a little amazed at how little story movement often occurs over a single 20 minutes. I was also amazed how little most of that mattered. But there is a formula here that delivers predictable laughs and has found quite a comfort zone with fans.

If there is a theme at all to the 10th season, it’s certainly that of family. You can’t miss the point from the very first episode of the season where Leonard (Galecki) and Penny (Cuoco) perform a second wedding ceremony so that their out of town family members can be a part of it. We already met Leonard’s mom as the somewhat snarky psychologist Dr. Beverly Hofstadter, played by Christine Baranski from The Good Wife’s (and its new spin-off The Good Fight. We had just met Leonard’s father, Dr. Alfred Hofstadter, played by Judd Hirsch, at the end of last season. Hirsch might be best known from the 1970’s classic Taxi, but he’s been a constant force on television and films ever since. Of course, these two don’t get along, and to the horror of both Leonard and Sheldon (Parsons) it seems as though he might be hitting it off a little too well with Sheldon’s mother, reprised by Laurie Metcalf.

We also meet more of Penny’s family. Keith Carradine returns as father Wyatt. In a rather nice move, they cast Katey Sagal as Penny’s mother, a part she played for actress Kaley Cuoco for years in 8 Simple Rules For Dating My Daughter. Her brother is played by Jack McBrayer. He’s just released from prison for making and selling crystal meth.

The family theme also applies to the couple of Howard (Helberg) and Bernadette (Rauch), who have a baby this season. In a bit of a nod to the late Carol Ann Susi who voiced the never seen but shrill sound of Howard’s mother, the baby is never seen and has a bit of that shrill. Family of a sort can also be applied to Sheldon and Amy (Bialik), who move in together in Penny’s abandoned apartment. At first it’s an experiment that becomes permanent as the season progresses. And while Raj (Nayyar) doesn’t get anyone new this season, he does get a bit of a growth arc when he finally declares himself financially independent from his father. Of course, that leaves him needing to adjust his standard of living.

One of the bigger story arcs of the season has Howard, Sheldon and Leonard recruited by the Air Force for their latest project. A highlight is a few appearances by Breaking Bad veteran Dean Norris as the colonel who works with them.

Over the years there have certainly been changes in the characters. The nice balancing act that the writers have pulled off is that the characters have been allowed to evolve, but only to a certain point. The nuances and relationship chemistry hasn’t really changed in 10 years, and that’s not an easy thing to pull off. There’s always the danger of pulling too tightly on the wrong thread and changing the dynamic that will send the fans away in droves. But you can’t let them be stagnant, or you’re just repeating yourself. The real genius is repeating yourself while not really appearing to do so,and changing the characters just enough so that it’s really only sharply visible when you look back and see how far they’ve come without having changed quickly at all.

2016 Big Bang ComicCon Panel: (39:13) No cast, just the writers and execs in the panel. It is hosted by actress Melissa Rauch.

The Ever Expanding Universe Of The Big Bang Theory: (11:22) The cast and crew look at the family members who pop in for the first episode.

The Big Bang universe is about to expand into a prequel show on CBS called Young Sheldon. Jim Parsons will not star as the title character, but he will provide adult Sheldon narration much like The Wonder Years did. Zoe Perry will take on the role of Sheldon’s Bible-Belt mother. The Big Bang Theory has also just been renewed for not one but two additional seasons. So this universe will be around for a while. And to think…”It all started with a big bang.”

Gino Sassani is a member of the Southeastern Film Critic's Association (SEFCA). He is a film and television critic based in Tampa, Florida. He's also the Senior Editor here at Upcomingdiscs. Gino started reviewing films in the early 1990's as a segment of his local television show Focus. He's an award-winning recording artist for Omega Records. Gino is currently working on his 8th album Merchants & Mercenaries. Gino took over Upcomingdiscs Dec 1, 2008. He works out of a home theater he calls The Reel World. Favorite films: The Godfather, The Godfather Part II, The Body Snatcher (Val Lewton film with Karloff and Lugosi, not the pod people film), Unforgiven, Gladiator, The Lion King, Jaws, Son Of Frankenstein, The Good, The Bad And The Ugly, and Monsters, Inc.
Contest: Win E.T. The Extra-Terrestrial On 4K UHD Blu-ray From Universal Broken Mile