Posted in: Contests by Gino Sassani on October 4th, 2017 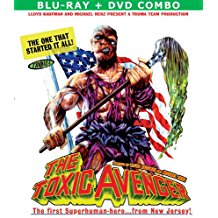 31 Nights Of Terror continues with a third straight contest. Some folks like their horror a little on the wacky side. That describes the King Of Schlock Lloyd Kaufman quite well. Troma has delivered the best of the worst for decades. They don’t come any worse than The Toxic Avenger, the film so bad they made a ton of sequels. We’ve got The Toxic Avenger Part III & The Toxic Avenger IV on Blu-ray for one lucky Upcomingdiscs follower. The discs include a ton of absurd extras. Just the thing for a Troma fan.

Gino Sassani is a member of the Southeastern Film Critic's Association (SEFCA). He is a film and television critic based in Tampa, Florida. He's also the Senior Editor here at Upcomingdiscs. Gino started reviewing films in the early 1990's as a segment of his local television show Focus. He's an award-winning recording artist for Omega Records. Gino is currently working on his 8th album Merchants & Mercenaries. Gino took over Upcomingdiscs Dec 1, 2008. He works out of a home theater he calls The Reel World. Favorite films: The Godfather, The Godfather Part II, The Body Snatcher (Val Lewton film with Karloff and Lugosi, not the pod people film), Unforgiven, Gladiator, The Lion King, Jaws, Son Of Frankenstein, The Good, The Bad And The Ugly, and Monsters, Inc.
Pirates of the Caribbean: Dead Men Tell No Tales (Blu-ray) Rowan & Martin’s Laugh-In The Complete Series