Pirates of the Caribbean: Dead Men Tell No Tales (Blu-ray) 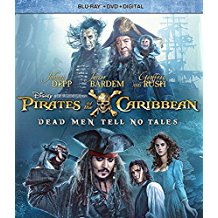 “This may seem a peculiar request…but could someone explain why I’m here?”

That question is posed slurred by Jack Sparrow, Johnny Depp’s perpetually sloshed swashbuckler, during his very first appearance in Pirates of the Caribbean: Dead Men Tell No Tales. Given that this is the fifth film in a faded franchise — and that Depp probably needs the money — the answer for why any of this is happening appears to be painfully obvious. Which is why I was delighted (and frankly a little shocked) by how much fun I had watching this latest entry, which manages to entertain while openly plundering the original movie’s winning formula.

Dead Men Tell No Tales opens with a prologue featuring Henry Turner, the son of original franchise hero Will Turner (Orlando Bloom, still cutting a dashing figure despite being cursed with barnacles that cover half his face) and Elizabeth Swann (Keira Knightley, clearly not being paid by the word here). Henry (played as a scrappy young man by Brenton Thwaites) is determined to find a way to locate the fabled Trident of Poseidon, which is rumored to have the power to break all nautical curses. Unfortunately, the ship where Henry is working has a deadly encounter with an undead vessel manned by Captain Salazar (Javier Bardem), who likes to leave a single crew member alive to spread his legend. Captain Salazar has an ax to grind with Jack Sparrow (Johnny Depp), so he allows Henry to live so he can deliver a message to the rum-loving scoundrel.

Eventually, Henry meets up with Jack and enlists his help in finding the Trident. They are joined by Carina Smyth (Kaya Scodelario), a scientifically-gifted young woman with daddy issues of her own who is accused of being a witch due to her advanced knowledge of astronomy and horology. (The movie amusingly gets some mileage out of the latter.) Meanwhile, Salazar’s reign of terror threatens the prosperity of Captain Barbosa (Geoffrey Rush), who becomes entangled in the search for the Trident.

Despite “only” clocking in at 129 minutes, Dead Men Tell No Tales can’t help but feel somewhat bloated. (I haven’t even mentioned the humorless British officer played by David Wenham or the *actual* witch played by Golshifteh Farahani; each could’ve easily been cut from this film, although I suspect the Farahani’s sorceress has a larger role to play in prospective sequels.) Thankfully, directors Joachim Ronning and Espen Sandberg — who earned a Best Foreign Language Film Oscar nomination for 2012’s Kon-Tiki, a Norwegian seafaring adventure — keep the pace lively and the story moving.

This film has an outrageous budget north of $230 million, and you can absolutely see it on screen. Some of the standout set pieces include zombie sharks (not a SyFy movie), the literal robbery of a bank, and (my personal favorite) Jack’s repeated close calls with a guillotine. The original Pirates was plagued by uncertainty over Depp’s quirky work and plenty of snickering over the fact that it was “based on a theme park ride.” (In a few months, we get something called The Emoji Movie, so a theme park ride might as well be a best-selling novel as far as source material goes.) That blockbuster was followed by two unnecessarily convoluted sequels and an uninspiring (mostly) standalone adventure that each raked in around $1 billion worldwide.

The fifth Pirates appears to be playing from Disney’s “what’s old is new again” playbook, which catapulted Star Wars: The Force Awakens to astronomical heights. Dead Men Tell No Tales similarly brings back original franchise favorites (Bloom…Knightley…the Black Pearl) in reduced roles alongside “new” characters who vaguely remind us of the people we all enjoyed in the first place. The comparison between Thwaites and Bloom is more on-the-nose since they are playing father-and-son, but the younger actor somehow prevents Henry’s earnest moxie from becoming irritating. Even better is Scodelario, who makes Carina a feisty, brainy (yet fallible) heroine worth rooting for. Bardem — who won an Oscar playing an iconic villain in No Country for Old Men and was almost as good of a bad guy in Skyfall — doesn’t get to show as much dimension as fellow undead Captain Davy Jones (Bill Nighy), but Salazar’s maniacal hatred of pirates (specifically Jack Sparrow) and Bardem’s unsettling performance (made even creepier by the rampant CGI) give the movie a jolt whenever he’s on screen. Heck there’s even the now-obligatory rock icon cameo! (Paul McCartney briefly steps in for Keith Richards.)

Of course, we’re all here for one reason, and that’s to see Johnny Depp as Jack Sparrow. The Pirates franchise transformed Depp from a beloved cult weirdo into an A-list weirdo. Depp’s Oscar-nominated(!!) work in the first film was subversive and fun, but it inevitably felt less fresh with each subsequent sequel. And while Dead Men Tell No Tales can obviously never recapture the spirit of Depp’s original work, he has plenty of tipsy fun here. (As a bonus, we also witness the origin of *Captain* Jack Sparrow.) Depp has a got a good partner in crime in Rush, who is as enthusiastically committed to living the pirate life as Barbosa is in the movie.

Be sure to stay through the end credits for a bonus scene that hints at a larger role for Bloom and Knightley going forward. Naturally, Dead Men Tell No Tales needed to be a hit for that to happen. While Depp is no longer a sure thing at the box office, this movie scored enough booty overseas to likely earn another installment.

Pirates of the Caribbean: Dead Men Tell No Tales is presented in an aspect ratio of 2.40:1. The 1080p image is arrived at with an AVC MPEG-4 codec at an average of 29 mbps. This HD presentation is a versatile stunner, whether we’re at the bottom of the ocean or on the sands of a resplendent beach. The latter offers warm and vibrant visuals, which make it easier to appreciate the texture and extraordinary detail of the film’s costumes and grimy makeup. If there’s one minor quibble with this presentation, it’s that a few of the film’s darker moments can look slightly murky. That being said, these sequences still offer strong separation and tremendous shadow detail. Overall, this is another home run for Disney.

The DTS-HD Master Audio 7.1 track is even more impressive than the great visual presentation and the best part of this Blu-ray release. The case can be made that the subs are a little too aggressive, but this is a Pirates of the Caribbean movie, not some low-key dramedy. The track is meant to grab us by the collar (of our puffy shirt) and transport us to this world, and that is precisely what this sonic presentation does. In addition to the muscular subs — which rumble to life for cannon blasts and roaring fire — there is fantastic directionality on display. That same cannon fire can be heard in the distance of a rear speaker during an early sequence with Henry Turner; but once it starts striking the ship Henry is on, the cannon balls can be heard traveling from the rears and exploding in the front speakers. That early sequence is indicative of the level of thrilling immersion throughout this track.

Dead Men Tell More Tales — The Making of a New Adventure: (47:50) This “Making Of” is broken up into seven parts but features a Play All option.

A Return to the Sea covers the “family” getting back together as cast and crew reunite for a fifth installment; Telling Tales: A Sit-Down with Brenton and Kaya is a pretty enjoyable conversation between the movie’s new young stars, who saw the first Pirates as teens; The Matador and The Bull: Secrets of Salazar and The Silent Mary features Bardem talking about playing Salazar as a wounded bull and his experiences watching wife Penelope Cruz film the previous Pirates flick; First Mate Confidential follows actor Kevin McNally (who plays Mr. Gibbs) from the makeup chair to the set as he offers a tour of the massive production; Deconstructing the Ghost Sharks breaks down one of the film’s standout action sequences; Wings Over the Caribbean offers a behind-the-scenes glimpse at Paul McCartney’s cameo, which was a favor to his friend Johnny Depp; and An Enduring Legacy quickly recaps the franchise’s massive impact, including the fact that the first film was a huge hit during a time when pirate movies were considered surefire flops.

Bloopers of the Caribbean: (2:58) The typical flubs with actors stumbling over their lines and Depp staying in character even as he gets tongue tied.

Jerry Bruckheimer Photo Diary: (1:40) A gallery of the mega-producer’s candid shots on set.

Deleted Scenes: (2:59) There are four scenes total, and the best features Jack teaching young Henry Turner how to properly threaten a pirate’s life.

Although all the Pirates sequels have put butts in seats thus far, I’m guessing a lot of people mentally checked out after the original and didn’t even bother with this one, which is a shame. Yes, this movie is a little too long and far from perfect, but it’s also a good deal of fun and much livelier than you’d expect from a fifth installment. On top of that, this Disney Blu-ray comes with a top-notch A/V presentation.

You don’t need Poseidon’s Trident to poke holes in this movie’s story, but “a great pirate does not bother with such intricacies.”