When Calls The Heart: Year Four 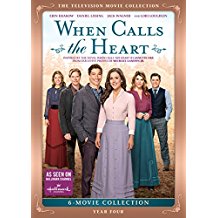 When Calls the Heart returns with a six-movie collection that plays out more like a television season. I must confirm my initial concerns that given this was a movie collection, I feared that I would have trouble following the story from movie to movie; however, that is not the case, as each movie picks up exactly where the other left off. With that sigh of relief, I was able to enjoy the wholesome values that are displayed in this frontier drama. Things to appear to looking up for the town of Hope Valley, with the railroad coming to town, looking to build a main route through the town, which would mean more jobs and opportunities for the townsfolk. On the other hand, Mayor Abigail Stanton is tasked with the difficult of job of negotiating with the railroad’s spokesman, Ray Wyatt, as well as keeping her word to townspeople who may be inconvenienced by the rail work. Also, Elizabeth Thatcher has trouble early on. Fortunately, she has Mountie Jack Thornton at her side to help her throughout; he also has a career decision to make that may impact his budding romance with Miss Thatcher.

Heart of Faith picks up where the Season 3 finale left off. It’s Christmas time in Hope Valley (formerly Coal Valley), and Miss Elizabeth Thatcher (Erin Krakow) finds herself heading up the Christmas committee, including organizing the Christmas play. Determined to do a good job, she dives head first into her work, rallying everyone she can to assist with the preparation, as well as trying to teach her class the true meaning of Christmas by assigning roles in a very creative way. Meanwhile, the townspeople are working to build new homes for the settlers who apparently lost their homes as well as their families in the mine collapse that predated this special. Working day and night to complete the project before the holiday, Canadian Mountie Jack Thorton (Daniel Lissing) must overcome many obstacles, all the while serving in his official capacity as the town’s law enforcement officer.

Meanwhile, local café owner Abigail Stanton (Lori Loughlin) finds herself overwhelmed as she tries to manage her business as well as fill in as the town’s mayor due to her predecessor being under federal investigation and not permitted to perform his duties. Bitter about his situation, Mayor Henry Gowen (Martin Cummins) offers no help to Abigail, who quickly finds herself in over her head. Finally a traveling salesman arrives in town, providing comfort for some and arousing suspicion in others.

Heart of Truth starts off upbeat with the spirit of competition with Elizabeth Thatcher and Jack Thornton serving as coaches for rival baseball teams involving Miss Thatcher’s students. Everyone is excited for the game, maybe a little too excited (for shame, Mayor Stanton), with the exception of  new student, Cyrus, who will be unable to play due to an earlier injury, that most believe has healed. Discovering that Cyrus is fearful of getting hurt again, Miss Thatcher gives him the strength to overcome his fears.  Meanwhile, Mayor Stanton must mediate a situation between the railroad and a farmer who is reluctant to uproot his family from a plot of land that the railroad is seeking. Also, Jack receives a distinguished award and an offer to head up a task force seeking a dangerous outlaw gang, but it would require him to leave Hope Valley and Miss Thatcher.  In the second half of Heart of Truth, Miss Thatcher must coax the truth from a student when his lie takes on a life of its own.

Many issues arise for each of the characters in this collection, particularly for Miss Elizabeth Thatcher, who finds troubles in both her professional and personal life. With the new business from the railroad, Miss Thatcher’s classroom size grows significantly, impacting the amount of school supplies available for the students. However, Elizabeth proves herself to be quite resourceful, organizing a fundraiser as well as coming to a deal with railroad spokesperson Ray Wyatt.  Just as it seems that she has that under control, she finds her very job threatened by a false allegation from her past in Heart of a Teacher. Compounding the issue, Jack receives career opportunity to lead a group of fellow Mounties against outlaw gangs in the north. Jack at first declines the opportunity, but it isn’t long before circumstances change, and he must leave Hope Valley and Elizabeth.

For Mayor Abigail Stanton, problems appear to continue to come out of the woodwork, specifically in regard to the railroad. Every time she quells an issue, another arises, and there is just no pleasing everyone, it seems. Not to mention, between managing her own business and raising young Cody. Abigail finds herself spread thin, which opens the door for ex-mayor Henry Gowen to attempt to slither his way back into his former office. There is plenty to be learned in each of the films, especially Heart of the Truth, in regards to the importance of honesty. I would recommend that the audience share that episode with their children if they have any. I believe an important life lesson can be learned by watching the hole that Robert digs himself into with his white lie about a bear near the school.

Though I am not the targeted audience for this franchise, I did find a couple of things to relate to. For example, it is hard to resist the wholesome nature of this town, where everyone seems to looks out for everyone, with a teacher who goes above and beyond her duties to ensure the welfare of her students. I dare say that if we had more people like that in our society, we’d be better off.  Also, it is good to watch a show that doesn’t involve overly sexualized plots and characters. In fact, I was able to sit down with my wife and child and enjoy this series. Well, my wife and I enjoyed it; my daughter kind of lost interest when she realized that there weren’t gonna be any animated characters or song numbers. Back on point, the issues that arise are realistic and relatable. When Calls the Heart embraces the idea that no one is inherently evil, even Henry Cowan, who tends to be cold and calculating, shows genuine concern for Cody when he gets sick.

I would have liked to have seen some more interaction between love interests Jack Thornton and Elizabeth Thatcher in the beginning. Though, they do tend to spend a good deal of time together, most of it is not in a romantic setting; it is mostly just Miss Thatcher seeking Jack’s counsel regarding an issue that she is having.   Granted the large ensemble, I recognize that accommodating such a thing was likely difficult, but given their courtship is a vital part of the story dynamic, the romance should not be sacrificed. Fortunately, that aspect is remedy in Healing Heart, when the two become engaged. Speaking of romance, it appears that romances are brewing for other characters as well, such as Lee’s assistant and the local nurse. That is another thing that I will credit the series with; they do a good job of rounding out things for the entire group, not just the main characters.

The final movie, Heart of a Secret, is guaranteed to tug on the heartstrings as the whole town feels the impact of a sick child. Cody, Miss Stanton’s adopted son, becomes ill with appendicitis, and with his life is in danger; the town must rely on the skills of former doctor Carson Shepherd, who hasn’t practiced medicine since the death of his wife during a surgery that he was performing. Watching the effect that Cody’s condition has on everyone from Abigail to Lee, I was overwhelmed with emotions and found myself praying for his speedy recovery. Unfortunately, I am not going to tell you if I was relieved by the outcome, as that would be giving too much away. You will just have to find out for yourself.

In conclusion, When Calls the Heart is a truly wholesome experience for the entire family. I can’t think of a better series to share with the family that is age-appropriate for everyone. The characters are well developed, and it is hard not to get invested in their lives. I sincerely recommend giving the movie collection a chance. I promise you will not be disappointed.

Jeremy Butler is a film school graduate of the International Academy of Design and Technology. He is been writing for Upcomingdiscs since 2012; however, movies have played a big part of his life for much longer. Favorite genres include horror, science fiction/fantasy, and comedy. Favorite movies are V for Vendetta, Boondocks Saints, Kiss Kiss Bang Bang, and The Godfather.
“31 Nights Of Terror” Open Water 3 Cage Dive (Blu-ray) The Survivalist (Blu-ray)