Posted in: Disc Reviews by Brent Lorentson on October 12th, 2017 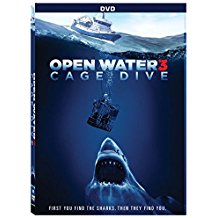 In 2003 Open Water hit the screen; it was a success since at the time the found-footage genre hadn’t yet saturated the market.  I thought it was a fun little movie that was creative, and what impressed me most of all was the use of the sharks in the film.  The danger always felt real, and to a point it was a convincing film.  It was inevitable that a sequel would follow, though it came and went so fast, it’s not big surprise that many seem to have forgotten the film existed.  Now it’s nearly a decade since the sequel came out that we now have a third installment, Open Water 3: Cage Dive.

It’s unfortunate for this film that 47 Meters Down also happens to come out the same year. (You can check out my review of that film on the site as well).  With a bigger budget, polished cinematography, and a recognizable cast, it’s no wonder that 47 Meters Down was the one to score at the box office while Open Water 3 managed to sink with barely a whimper. This isn’t the first time films with similar plots have released at the same time, but most often the case there is one that stands out; this isn’t the film to do that.

Three friends from Laguna, California decide to plan a trip to Australia to go cage diving with great white sharks. Jeff (Joel Hogan) decides he wants to film the trip and cut together an audition video for him and his friends to enter into a reality show.  With the explanation for why the trio is filming themselves set up, the front portion of the film is setting up their relationship, and unfortunately this is a trio of characters I couldn’t wait to see become little human nuggets for the sharks to devour. There is Megan (Megan Peta Hill) who is Josh’s girlfriend, and then there is Josh’s best friend, “brother”, Josh (Josh Miller).  Seeing this relationship triggered flashbacks to the MTV show Laguna Beach and simply how much I grew to be annoyed by those “reality” actors.  Whether the comparison was intentional or not, the soap opera drama between these three is eye-roll-inducing.  These are not the most likeable or relatable characters, and that’s immediately where this film went wrong.  It doesn’t offer a character for us to root for and fear for; instead these are just bodies for the kill count in this film.

But this is a horror film, so how does the film shake out in that aspect?

What triggers the terror in the film is that a rogue wave hits the tour boat that the friends are on and causes it to capsize.  Little to no time is spent with this when this could have been some powerful and intense stuff, but I can understand budget constraints limited just how much they could do with this sequence.

Just how the trio manages to escape the cage so easily I have a bit of a problem with, but I’ll ignore that as we finally get to what we’ve been waiting for, to see the trio stranded in the water and struggling to survive.  A good portion of this part of the film works; the less-is-more approach to where the sharks may be lurking does heighten the suspense nicely and does produce some fun sequences as the film progresses.

Then there is the moment someone does something so stupid. You see this coming, and it’s one of the rare moments it had me talking to the screen telling them not to do it, and then they do it. No, it’s not because I’m so wrapped up in the moment I’m concerned for the characters’ well being; I’m instead channeling the filmmakers not to make such an easy move.  I’m being vague because it does get into spoiler territory, but when it happens, trust me, you’ll know what I’m talking about.

Here’s the thing, it’s when a character does something stupid in a horror film that you lose your audience. Why we see this mistake happen time and time again frustrates me, because what the audience wants is to see a character make all the right moves and just at the moment of escape, you rip the rug right out from under them.  That’s the difference between Open Water 3 and 47 Meters Down, and why one succeeded at the box office and the other didn’t.  It frustrates me to see the direction this franchise has gone, because it has potential to produce something great.

Open Water 3: Cage Dive is presented in the aspect ratio 1.78:1.  The 1080p image is arrived at with an AVC MPEG-4 codec that runs as low as 8mbps and as high as 38mbps.  The image quality is all over the place here, but that’s to be expected with a found-footage film.  The low mbps are largely a result of when the film shoots in night vision, and the highs are mostly when the film is in the day time.  There is some nice underwater photography. There are a few moments where we get some pixilation and compression issues; it’s hard to say what is intentional, though I’ll give the film the benefit of the doubt and say it was intended for the authenticity of the film. When they hit the water the image does seem to bob and rock, so careful for those of you who get nauseous easily.

The DTS-HD Master Audio 5.1 track is one that also isn’t remarkable, but yet it’s suitable for being a found-footage film.  Sound of course drops out, and the dialog isn’t always clean and clear, but that’s to be expected.  The distant sound of planes and helicopters does add to the tension as it adds to the helplessness of the characters.

Commentary director Gerald Rascionato and actors Joel Hogan and Josh Potthoff: The trio seems to get along well and do offer plenty of insight into the making of the film as they offer up stories about their experience making the film.  Hearing one of the actors discuss having to film one of the night shots with the sharks circling around does give me more respect for what they had to go through to make this film.

Behind the Scenes Featurette: (5:04) A very brief selection that delves into the conception of the film and some behind-the-scenes footage.

Deleted Scenes and Outtakes: (15:08) Many of these scenes I would have left in the film or substituted out even though it’s mostly of the three being tourists before going on their dive.  The scenes made them more likeable in my opinion.

This is not the sequel that I had hoped for with this film.  On the bright side, it’s still better than numerous other found-footage films that are out there.  If you’re like me with a shark film obsession, this is still a must-watch no matter what.  It’s sadly a forgettable film in a franchise that deserves so much better.  Thankfully with the low budget we can hopefully get another sequel that brings new blood to the franchise.

Brent Lorentson is a horror writer and film critic based out of Tampa, Florida. With a BA in Digital Film, he co-wrote and co-directed Scavenger Hunt. His short stories have appeared in various horror anthologies. In 2019 his short script Fertile Blood will be a part of the anthology horror film Slumber Party. He is currently working on his first novel A Dark and Secret Place set to be released in late 2019. Favorite Films: Taxi Driver, Fight Club, I Saw the Devil, The Wild Bunch, Dawn of the Dead, A Clockwork Orange, Pulp Fiction, Heathers, The Monster Squad, and High Fidelity.
“31 Nights Of Terror” Starship Troopers: Traitor of Mars (UHD Blu-ray) (4K) When Calls The Heart: Year Four