Posted in: Disc Reviews by Brent Lorentson on October 13th, 2017 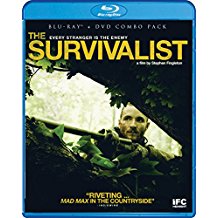 When a film like The Survivalist comes along, you somewhat have an idea what to expect when it’s being marketed as a “dystopian thriller”. I like these kinds of films, but for the most part many of them are just not very good and are just a carbon copy of previous dystopian films that came out prior to it.  For years I’ d say the Mad Max series was the gold standard on what you should want to be. Waterworld at least attempted to be Mad Max, but rather than a desert wasteland it went the direction of the high seas. The Survivalist goes another direction; rather than a barren wasteland, or the ocean, it instead plunges deep into the wilderness after society has apparently collapsed and food has become scarce.

The film follows a man who is simply credited as the survivor (Martin McCann), and we see him dragging a body away and dumping it into a shallow grave. It’s an ominous opening that has the viewer questioning if this is a guy we should root for or not, but following this scene we go on to see his daily routine in his boring isolated life. Apparently one of his routines is having a little private time with himself, and the camera has no problem shying away from this. This goes up there as one of the most pointless gratuitous nude scenes I’ve seen at least since the opening sequence of Nocturnal Animals. I’m far from a prude, but I’m a believer that everything we see on the screen should have some meaning to drive the story forward. This instead just became a distraction.

His isolated life is later interrupted by the arrival of Kathryn (Olwen Fouere) and her teenage daughter Milja (Mia Goth). The survivor is clearly paranoid but still takes the two uninvited guests in, and from there we get to see some socially awkward exchanges where it seems the teenage daughter is used as a bargaining tool to grant them safety on his little farm. He dialog exchanges are brief and clunky, which works because we should assume that these people have had little human interaction for long stretches of time.

The problem I have with the film is there is nothing that endears me to these characters. These are very cold and flat characters, not that I can blame much of this on the writing, but this is simply a result of the reality of the film.  This becomes an issue when there is a threat from the outside; we are given so little information we just have to assume the threat is bad, though this character doesn’t act much different than the survivor we’ve been following all this time.  This thin line of good and evil simply lingers through the rest of the film, and as a member of the audience it’s up to us really to decide who is good or bad.  I’m fine with the ambiguity, but at the same time it just feels lazy that all we get are glimpses or implied suggestions with the motivations of these characters.

A lot of this movie feels like it could exist in the same world as The Road, and it would work as a nice companion film if one were inclined to have a double feature. Granted this is a micro-budget film by comparison with The Road, but the two definitely share the same cynical outlook of the possible future.

As a first time feature filmmaker, director Stephen Fingleton does show plenty of promise here.  The film definitely has its issues on the story front, but visually I’m a fan of this. There is a definite look and style that comes through with the film, and I really think if some of the film was trimmed this would have worked better. In this world, everyone seems so eager to kill each other rather than reach out and help; is this perhaps an all-too-honest take on what the future will hold for us if society were to collapse?  There is an unspoken conversation here that I wish was addressed on some level.

The Survivalist is presented in the aspect ratio 2.40:1.  The 1080p image is arrived at with an AVC MPEG-4 codec at an average of 28 mbps.  The color scheme here is drab, yet beautiful at the same time.  Browns and other dark muted colors seem to be everywhere; the only color that seems to shine bright is green, and it simply pops.  There is a lack of any other colors here; even when we see the blood it looks dark and muddy.  The way the film is shot limits detail at times as the focus seems to shift within the shot like we would see in a documentary.  Textures do come through nicely, whether it’s the grizzled unshaven face of the survivor or the texture of the dirt while they are tending the garden. This isn’t the best example of HD, but the image quality works as a visual tone for the film.

The DTS-HD Master Audio 5.1 track is a little lackluster, but a large part of this is due to the style of the film.  This is a quiet film, but when there is a sound it does actually matter.  For instance, when we hear a bird, this is a big deal since most of the animals in the woods have been killed off.  But more prominent are the rattle of rusty cans that alert the survivor to trespassers. The silence is a layer to the mood of the film that definitely does make an impact.  Ambient sounds like the crackle of the fire in the stove sound crisp.  It’s the simplicity that works with the clean and clear dialog for the times the characters do actually speak.

Making of Featurette: (21:48) A lot of this could have been trimmed down by just removing clips that play from the film. It gives a little bit of insight into what inspired the film and about the process of making it.

Short Films:  There are three short films here from the director.  This is a fun bonus, because it lets us see how he progressed before getting to do his first feature.  This is a must-see for any film students or those interested in making their own films.

While I’m not exactly overwhelmed with excitement with the film, it definitely shows promise in this up and coming filmmaker.  If you are a fan of dystopian films, then definitely I would recommend this, because it is definitely better than a lot of what is out there.  But if you are going into this expecting Mad Max or The Road, you’d better lower those expectations.

Brent Lorentson is a horror writer and film critic based out of Tampa, Florida. With a BA in Digital Film, he co-wrote and co-directed Scavenger Hunt. His short stories have appeared in various horror anthologies. In 2019 his short script Fertile Blood will be a part of the anthology horror film Slumber Party. He is currently working on his first novel A Dark and Secret Place set to be released in late 2019. Favorite Films: Taxi Driver, Fight Club, I Saw the Devil, The Wild Bunch, Dawn of the Dead, A Clockwork Orange, Pulp Fiction, Heathers, The Monster Squad, and High Fidelity.
When Calls The Heart: Year Four Peanuts Holiday Collection (UHD Blu-ray) (4K)