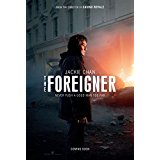 Action heroes are very much like sports superstars. So much of what they do is tied to their physical ability, and eventually time catches up to them. For sports figures they either try and accept it and go out on top, or they taint their legend by trying to hang on. The same can be said for action heroes, except there is a third alternative. Some action movie actors learn to adapt their material to their current skill level. Clint Eastwood, while not really an action star, was known for physical roles. He found a way to age quite well on screen with films like Unforgiven and Gran Torino. Jackie Chan appears to have learned that lesson, and The Foreigner, while not in the same stratosphere as Clint’s last staring efforts, does a good job of redefining the actor and giving him something he can do well going forward. With a different kind of smoke and mirrors than the wirework and stunt choreography of Chan’s prime years, this is a film you will find enjoyable and maybe walk away seeing less than you believed you saw.

The film isn’t exactly original. You can take any of a dozen Charles Bronson films and fill in some gaps to get the plot of The Foreigner. Jackie Chan plays Quan. He came to England after the Vietnam War and now owns a quiet little restaurant. His daughter ends up a casualty in a terrorist attack by a new generation of the IRA. The loss sends him into a deep depression made worse by the lack of answers to the violent attack. Pierce Brosnan delivers an incredible performance as Liam Hennessy. Liam is a former leader of the IRA who has now found new life and a kind of redemption as an official liaison between the British Government and his former brothers in the movement. His efforts have delivered 19 years of peace that is suddenly threatened by this bold attack. Liam finds himself caught in the middle of the government and his allegiance to his old comrades. It’s about to get much worse for Liam. Quan has identified him as the man who can get the names of the people who killed his daughter, and he sets out as a one-man army to “convince” Liam to provide that information. Quan can’t get revenge on the men responsible (yet), so he concentrates his efforts on Liam. It turns out Quan once led a not-so-quiet life once and has some pretty serious skills.

The truth of the matter is that Jackie Chan really doesn’t have near the screen time that you might be used to. His stunts are also much more limited than expectations, but the pacing of the film manages to pull a little sleight of hand here. You’ll walk away feeling like you actually saw more of Chan than you did and that he was far more active than he was. It’s actually a bit of an ingenious structure and an effective way of dealing with an action star in his 60’s. Now don’t get me wrong. Chan’s still in better shape at 61 than I was in my 30’s. Still there are some facts of life we all have to face, and this film allows Chan to face them effectively, indeed.

All of that screen time that you’re not seeing Chan, you’re distracted by a disarming performance delivered by Pierce Brosnan. He completely takes over the conflicted Liam, and you completely forget about the actor. He steals the film from Chan on several occasions, but it’s the brief moments they are together that are pure cinematic magic. You get a wonderful character study, except you came for an action film. Director Martin Campbell let’s you think that’s exactly what you get. I warn you, however. At some point after you’ve seen the film, it’s going to dawn on you what happened, and I hope it’ll make you smile. Yeah, you were tricked. But it turns out that’s exactly why we go to the movies.

In the end, this isn’t a great film. It’s a good film with great moments. It’s going to be remembered more as marking the beginning of the next phase of Jackie Chan movies. And if you were entertained along the way, all the better. At 61 Jackie Chan still has a message: “He wants you to know he can still get to you.”

Gino Sassani is a member of the Southeastern Film Critic's Association (SEFCA). He is a film and television critic based in Tampa, Florida. He's also the Senior Editor here at Upcomingdiscs. Gino started reviewing films in the early 1990's as a segment of his local television show Focus. He's an award-winning recording artist for Omega Records. Gino is currently working on his 8th album Merchants & Mercenaries. Gino took over Upcomingdiscs Dec 1, 2008. He works out of a home theater he calls The Reel World. Favorite films: The Godfather, The Godfather Part II, The Body Snatcher (Val Lewton film with Karloff and Lugosi, not the pod people film), Unforgiven, Gladiator, The Lion King, Jaws, Son Of Frankenstein, The Good, The Bad And The Ugly, and Monsters, Inc.
Loch Ness, Series 1 “31 Nights Of Terror” The Snowman