Posted in: Disc Reviews by Brent Lorentson on October 19th, 2017 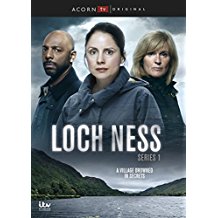 When it comes to hearing the name Loch Ness, just about everyone will think about the giant lake where “Nessie” the mythical monster inhabits. Whether you are a believer or not thousands converge to the Scottish Highlands location in hopes to be one of the lucky ones to catch a peak of the elusive beast. But the Loch Ness I am talking about is a beast of a whole other ilk. Thought the TV series does take place in a small tourist town that thrives on the legend that haunts the cold water, the series instead is about a serial killer that has been unleashed upon the town and given its residents something more to fear other than a giant monster that roams the lake.

A group of friends decide that they want to play a hoax by creating a fake plesiosaur carcass and placing it along the lake shore.  While using fake innards that salvaged from the local slaughter house it is later discovered a human heart managed to somehow get mixed up in the remains.  With a human heart found and no body, this of course sends an uneasy shock-wave through the town. Detective Annie Redford (Laura Fraser) is tasked with leading her first murder investigation in a town that rarely has experienced its share of violence and it doesn’t take long before a body is found (not one that belongs to the missing heart) and it is understood that they have a serial killer on their hands. Investigator Lauren Quigley (Siobhan Finneran) is called in to take lead of the investigation where she also brings criminal psychologist Blake Albrighton (Don Gilet) to assist.

Really this isn’t all so different from any other who done it murder series, but it’s the location and the cast of characters that keeps this story feeling fresh.  In a town where everyone knows everybody, its fun to see how the town begins to turn on one another as the investigation turns it’s its attention on the townsfolk.  Has each person is investigated we see how just about everyone in the town has a set of skeletons in their closet as well as their own reasons to commit murder, but who really is the killer and who does the heart belong to are the questions that hang over the season for its entire 6 episode run.

The dynamic of Redford and Quigley is what kept me hooked, the local detective in over her head while the experienced investigator sees the consequences of her actions in being too intrusive with her investigation. Making the situation more difficult for Redford is her daughter that was involved in the hoax that started this all.  Evie (Shona McHugh) is one of those characters that you can’t help but get frustrated with at times, since she’s the rebellious child of a detective you just know her reckless decision making will get her into trouble.

The front half of the series plays out like a fun murder mystery where bodies are being found and people are going missing.  There are some fun tense moments here that I wish stretched out to the final half of the season but instead the latter half of the season is about narrowing down the suspects. There was plenty of room for more twists and more bodies but the show instead goes a more subtle route, that isn’t bad but it just left me wanting more.

One of my favorite bits in the show is that we discover one of the members of the town is a reformed killer.  This had potential to open the show up but unfortunately their storyline gets resolution that I wish never took place, this could have been a nice side story that could have developed into the second season of the show but unfortunately it doesn’t look like that will be happening.

One thing I did find clever is that the show lets the audience in on a mystery before any of the other characters, and it’s to a body that is beneath the lake.  I’m not spoiling anything by this because it’s a part of the opening credits, but it is fun seeing this body and not knowing who or what their involvement is to the story and we get to begin making our own theories on the matter.  It reminds me of the old suspense tactic Alfred Hitchcock described on how to create suspense by showing the audience a bomb under a table.

Loch Ness is presented in the aspect ratio 1.77:1.  The 1080p image is arrived at with an AVC MPEG-4 codec at an average of 30 mbps.  The location of this series offers up many beautiful scenic shots that are well captured here.  There is a lot of color throughout the show and when the scenes move to the lake color seems to slip away.  There is plenty of detail captured and the flesh tones seem appropriate for the location of the series.

The DTS HD-Master Audio 2.0 track is subtle but gets the job done. What matters in this show is the clarity of the dialogue especially when some of the characters do have thick accents. While a surround mix would be nice the show isn’t hurt by having a simple two speaker mix.  There are only a handful of scenes I could imagine that would have been better enhanced but it wouldn’t change my feelings on the show. Because everything is coming from the front speakers the sounds been compressed and you may have to turn down your volume some for this while at times of a lot of dialogue you may crank it up.

Cast Interviews: (19 minutes) We have the option of listening to the interviews separately where members of the cast discuss their characters and experiences with the show.

Behind the Scenes: (13 minutes) There are two segments, one discusses the production and the story of the show while the other discusses more of the lore on the location.

While I wouldn’t call this a ground breaking series it is certainly entertaining for those who enjoy a good who done it series.  While these six episodes do have a very contained story line, there is potential for several more seasons and even more fun characters to explore.  It’s a shame that considering the mythology of the lake that none of it is really explored in the show, I’m not saying I want to have a monster in the show but it seems like a terrible thing to waste when you have such an obvious go to creature in your show.

Brent Lorentson is a horror writer and film critic based out of Tampa, Florida. With a BA in Digital Film, he co-wrote and co-directed Scavenger Hunt. His short stories have appeared in various horror anthologies. In 2019 his short script Fertile Blood will be a part of the anthology horror film Slumber Party. He is currently working on his first novel A Dark and Secret Place set to be released in late 2019. Favorite Films: Taxi Driver, Fight Club, I Saw the Devil, The Wild Bunch, Dawn of the Dead, A Clockwork Orange, Pulp Fiction, Heathers, The Monster Squad, and High Fidelity.
“31 Nights Of Terror” Escape Room The Foreigner