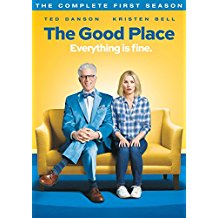 “Welcome! Everything is fine.”

One of my favorite bits from the dearly departed Inside the Actors Studio involved host James Lipton administering a questionnaire that concluded with “If heaven exists, what would you like to hear God say when you arrive at the pearly gates?” It’s a momentous question that often drew a humorous response. The Good Place opens with its main character waking up in the afterlife and being greeted with bright green lettering that says “Welcome! Everything is fine.” It’s a reassuring sentiment to be sure, but let’s be clear: there is nothing just “fine” about The Good Place. This sharp, hilarious, and goodhearted fantasy/comedy is spectacular!

The series begins with Eleanor Shellstrop (Kristen Bell) sitting in an exceedingly pleasant waiting room. Eleanor soon meets Michael (Ted Danson), who cheerily informs her that she has died and arrived in the afterlife. The reason Michael is in such good spirits is because he gets to inform Eleanor that she has arrived in The Good Place, a highly-exclusive, neighborhood utopia. Michael is also the architect of The Good Place —the first such neighborhood he has designed — so he gives Eleanor a tour and introduces her to pre-determined soulmate Chidi Anagonye (William Jackson Harper). But as Michael recounts Eleanor’s many humanitarian exploits, there is one nagging problem…Eleanor didn’t do any of the stuff Michael is talking about. She has arrived in The Good Place by mistake!

Since there is an actual points system to get into The Good Place, Eleanor immediately realizes she didn’t do nearly enough with her life to legitimately gain entry. She quickly confides in Chidi — who happens to be an ethics professor — and enlists his help in helping her become a good enough person to avoid detection and being sent to The Bad Place, which consists of non-stop torture. In the meantime, Eleanor and Chidi have to keep her secret hidden from Michael (who has decided to live in the first neighborhood he created) and the ever-present, all-knowing guide Janet (D’Arcy Carden). They also have to dodge their next door neighbors, annoyingly overachieving philanthropist Tahani Al-Jamil (Jameela Jamil) and her assigned soulmate, a silent Buddhist monk named Jianyu Lu (Manny Jacinto).

“There’s something so human about taking something great and ruining it a little so you can have more of it.”

The Good Place is created by Michael Schur, best known for his work on The Office, Parks and Recreation and (most recently) Brooklyn Nine-Nine. The Office and Parks and Rec are two of my favorite sitcoms of the past decade, but even I can admit they each got off to sluggish starts during their abbreviated first seasons. There is no such slow start with The Good Place, which takes off immediately with its inventive and confident pilot.

The series is funny and creative in virtually every way I could ask for from a comedy. The ridiculously idyllic nature of The Good Place (which offers every flavor of frozen yogurt you could ever want) lends itself to funny sight gags involving Michael’s dapper outfits and the creepy clown decor in (Fake) Eleanor’s home. The NBC show has also devised an ingenious way of addressing that fact that it can’t keep up with its profane premium channel comedy competition: since there is no swearing in the good place, certain curse words are amusingly replaced with “fork”, “shirt”, and “bench.”

“Oh, he’s from Florida? Yeah, he belongs in the Bad Place.”

While those clever touches are commendable, The Good Place achieves greatness by exploring simple-sounding questions that are actually quite profound. What does it mean to be good? Who gets to decide whether a person is good or bad? Also, why are those the only two options…shouldn’t there be a Middle Place? While The Good Place has some fun defining goodness — it’s not looking good for people who microwave fish at work…or the entire state of Florida — the show takes these questions seriously while making us laugh consistently.

Bell, best known for her starring turn as teen sleuth Veronica Mars, brings the same determination and resourcefulness to her work as Eleanor. The show features frequent flashbacks to Eleanor’s less-than-admirable life on Earth, which allows Bell the chance to show some range. And even though Eleanor is no angel, Bell completely sells the character’s gradual growth. Meanwhile, The Good Place makes great use of the fact that Ted Danson is one of the most beloved TV actors of all time. Michael’s jaunty outfits and relentless good charm match the utopia he created perfectly, even if his spiffy appearance often masks how frazzled he is on the inside.

But other than the occasional appearance by Adam Scott — a tremendously nasty piece of work as Michael’s counterpart from The Bad Place — I was unfamiliar with the rest of the cast, which is phenomenal. I’m especially impressed with Harper’s anxious straight man work as Chidi and Carden’s scene-stealing curiosity as Janet, who is basically a human Siri. (This is the part where Janet would helpfully point out she’s not human.)

The Good Place: The Complete First Season features all 13 thoroughly rewatchable episodes on two discs. There are commentary tracks for the two-part series premiere and the two-part finale. Disc 2 also includes a Gag Reel (complete with profanity and a points system), “A Look at Visual Effects” reel, and a Live Table Read for Ep. 12/”Mindy St. Claire.”

The show is more serialized than your typical network sitcom; many episodes end with a cliffhanger. The Good Place features too many twists and turns to count but concludes with one of the best season finales I’ve seen in a very long time. Season 2 is already well underway, so if you haven’t already jumped on board, “Welcome! Everything is Great!”