“31 Nights Of Terror” Contest: Win Vampirina On DVD From Disney

Posted in: Contests by Gino Sassani on October 25th, 2017 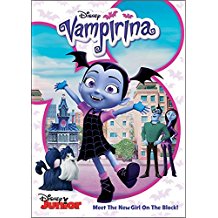 31 Nights Of Terror Continues with another nod to the young ones. Disney knows how to do scary, but not so much. It’s a chance to invite the kids into the festivities. From the folks at Disney Junior comes Vampirina. She’s the new kid on the block straight from Transylvania. It’s 4 episodes of the “fangtastic” show and it’s new on DVD.

Gino Sassani is a member of the Southeastern Film Critic's Association (SEFCA). He is a film and television critic based in Tampa, Florida. He's also the Senior Editor here at Upcomingdiscs. Gino started reviewing films in the early 1990's as a segment of his local television show Focus. He's an award-winning recording artist for Omega Records. Gino is currently working on his 8th album Merchants & Mercenaries. Gino took over Upcomingdiscs Dec 1, 2008. He works out of a home theater he calls The Reel World. Favorite films: The Godfather, The Godfather Part II, The Body Snatcher (Val Lewton film with Karloff and Lugosi, not the pod people film), Unforgiven, Gladiator, The Lion King, Jaws, Son Of Frankenstein, The Good, The Bad And The Ugly, and Monsters, Inc.
War For The Planet Of The Apes (UHD Blu-ray) (4K) “31 Nights Of Terror” Forry Ackerman Tribute