Posted in: Disc Reviews by Gino Sassani on October 25th, 2017 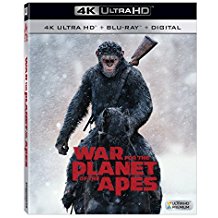 “All of human history has led to this moment. The irony is we created you. And nature has been punishing us ever since. This is our last stand. And if we lose… it will be a Planet of Apes.”

I was always a fan of the original Planet Of The Apes series of films. While they often flirted with a camp style, I was impressed with John Chambers’ makeup effects and the performances of Roddy McDowall as both Cornelius and Caesar. Then came the television show, and I was just as enchanted, and that was helped along by McDowall’s appearance as a third ape, Galen. The show didn’t last a season, and before long the Apes franchise was left in some kind of limbo. Then along came Tim Burton, and I was excited to see what he could do with the material. Could this be the beginning of a new series of films? No, it was horrible, and the franchise suffered another lingering death. I had now given up hope that the Apes would ever return. Then came Rise Of The Planet Of The Apes, and I was suddenly enchanted once again. Little did I know that combined with Dawn Of The Planet Of The Apes and now War For The Planet Of The Apes, science fiction’s greatest trilogy would emerge. Where will they go from here?

It has been many years since Dawn Of The Planet Of The Apes. Caesar (Serkis) hasn’t been heard from in many years. He and his ape civilization have become something of a mythology to the soldiers who are on constant patrol hoping to find and eliminate the ape threat once and for all. One such patrol comes upon the ape settlement, and a firefight results. The apes prevail, and then Caesar does something unexpected. He allows the surviving human captives to return to their camp with a message that he wants peace and is willing to coexist with humans. That really isn’t going to work for a character we know only as The Colonel (Harrelson). The conflict escalates, and Caesar finally realizes he must confront this human once and for all. What happens next is both unexpected and amazing for the viewer.

The movie becomes a bit of a road film as Caesar and a small band of followers make way for The Colonel’s camp. Along the way they witness exactly what is happening to the planet since the virus outbreak. They also meet some interesting characters. Nova is a young child, played by Amiah Miller. She’s the kind of human Caesar must hope he will encounter more often. She is friendly and at ease in the company of the intelligent apes. There’s a bond that develops here that is an obvious desire for future human/ape relations. They also encounter the opposite side of the same coin with an ape who refers to himself as Bad Ape because that’s all he was used to hearing humans say to him. He’s played a little too much for comedy relief, voiced by Steve Zahn. Of course, the Nova character is a bit of a nod to the original film, as is the name of Caesar’s newest son, Cornelius. This act of the film is a rewarding one, indeed. The pace might seem a little slow for anyone who comes to this movie expecting wall-to-wall fighting as the name might imply. But if you keep an open mind, this journey is a wonderful trip through this new world with amazing emotional beats that have you soon forgetting that these emotions are coming from talking apes created through computers. It’s a powerful script that breaks down these barriers and allows such a connection with these characters.

Of course, they do reach the base, and we get to meet The Colonel, who is an obvious homage to Marlon Brando’s character in Apocalypse Now, right down to his shaving his head and muttering almost incoherent lines of ideology with almost a religious fervor. Caesar arrives to find that The Colonel has enslaved hundreds of apes to build his fortress against not just the apes but a surviving military structure that considers him insane and rogue. Yet another nod to Brando’s crazy but classic character. If you need any proof that the comparison is completely intentional, you need look no farther than graffiti on a sewer wall that reads Ape-pocalypse Now. In one of the film’s most dramatic and touching moments, Caesar and The Colonel have a bit of a talk. Here we learn what the stakes of the film really are, and we learn it without the violence too many will come to this film expecting. Yes, there’s the daring prison break and the military engagement you likely came expecting to see. But it won’t be exactly what you were expecting, to be sure. The ending will take you by surprise. One chapter closes. We’re now ready for the next chapter in The Planet Of The Apes.

The strength of this film remains with the outstanding motion-capture performance of Andy Serkis. He was a pioneer for that kind of acting. It’s getting more commonplace but Serkis still stands above anything that anyone out there is doing. Caesar is as real as any character you’ve encountered on film. There is thought and emotion behind his eyes. Caesar is haunted by the ghost of Koba and that inner turmoil is as clear as it would be on a real human face. The performance alone is worth the price of admission.

War For The Planet Of The Apes is presented in its original aspect ratio of 2.40:1. The Ultra high-definition 2160p  image is arrived at by an HEVC codec with an average bitrate of 65 mbps. This ultra high definition image presentation is a sight to behold. You gain an even better appreciation for just how real these computer-generated characters actually are. The sharpness here lets you see these apes down to the individual hairs. The close-ups on faces reveal the motion-capture performances down to the ability to create an emotional link that I can’t say I’ve experienced with something that wasn’t really there. There’s a nice depth to the entire film. The environments are just as impressive. This is not a bright or colorful film but the colors are reproduced faithfully to the style of the shoot. Here’s where a 65mm shoot is able to show off quite a bit. Black levels have to be extraordinary when you have such dark characters in such dark lighting. That’s exactly what UHD brings to this franchise.

The Dolby Atmos presentation defaults to a truly immersive 7.1 track. The surrounds are aggressive. During the battle scenes you will be surrounded by fire. That’s not where the surrounds are at their best. It’s the ability to bring you into these environments where the real magic occurs. Water is a huge theme throughout from Caesar’s waterfalls bedroom to the underground tunnels and the wonderful spatters of rain. Dialog is rich and deep particularly with Serkis’s speeches. The subs add a nice depth to it all without overdoing things. I’m also very fond of the score which brings in elements of the Goldsmith score of the 1968 film. There are some sweet percussive elements and a thrilling sweeping string section that fills the room.

There is an Audio Commentary with Matt Reeves that is both lively and entertaining.

Deleted Scenes: (23:02) There are 10 with a play all option. You also get an optional Matt Reeves commentary. Most are incomplete f/x that offer you an extended look at the motion-capture actors performing in the scenes.

Waging War For The Planet Of The Apes: (29:38) This is the behind the scenes feature that covers areas like costumes, weapons, set design, conceptual art, locations and the motion-capture process. Cast and crew offer up their thoughts on watching the original films in the franchise. They also viewed many classic films for inspiration that ended up on the screen.

All About Caesar: (12:40) This feature obviously focuses a lot of attention on Andy Serkis. He’s really been the pioneer for this kind of filmmaking. The feature looks at the evolution of the character over the 3 films. One thing that really stands out is the progress in technology from the first to third film. I was already very impressed with the first but the progress is incredible.

WETA – Pushing Boundaries: (10:25) This is the f/x feature that takes you behind the computer screens and show the phases of rendering to make such amazing visuals.

Music For Apes: (6:20) This feature takes us to the last recording session for the orchestra which also fell on Matt Reeves’s birthday. We also are introduced to one of the percussionists who has actually played music for all 9 Apes films since 1968.

Apes – The Meaning Of It All: (20:15) This is a sweet look at the entire franchise. There are clips from all 9 films with plenty of information on the franchise as a whole. Yes, even the Tim Burton film is covered.

The Apes Saga – An Homage: (7:48) All 3 of these films are filled with Easter eggs referring back to the original 5 films. This feature points out many of them.

The film goes completely against expectations and is a more thoughtful and contemplative film than the title implies. Matt Reeves has worked wonders with this franchise, and he continues to astound with each film. The technology continues to improve to the point that these apes are as real as any of the human characters, and honestly more relatable in the end. The film is ultimately about family and unity, and at its core it’s about survival. Reeves has demonstrated something that people like Michael Bay seems to have forgotten. You can put millions of dollars of effects on a screen and make it all a crucial part of an emotional story. Here those amazing digital wonders blend flawlessly into a narrative where you aren’t supposed to marvel at technology; rather it just becomes a part of the story. The strings are invisible here, and that makes a world of difference. Within minutes I stopped thinking about effects at all. Reeves allowed the film to absorb me totally with no distractions or “look at me” moments. This may not be an accurate look at Earth’s future, but I hope it’s an accurate look at the future of f/x and story. “Apes together strong.”

Gino Sassani is a member of the Southeastern Film Critic's Association (SEFCA). He is a film and television critic based in Tampa, Florida. He's also the Senior Editor here at Upcomingdiscs. Gino started reviewing films in the early 1990's as a segment of his local television show Focus. He's an award-winning recording artist for Omega Records. Gino is currently working on his 8th album Merchants & Mercenaries. Gino took over Upcomingdiscs Dec 1, 2008. He works out of a home theater he calls The Reel World. Favorite films: The Godfather, The Godfather Part II, The Body Snatcher (Val Lewton film with Karloff and Lugosi, not the pod people film), Unforgiven, Gladiator, The Lion King, Jaws, Son Of Frankenstein, The Good, The Bad And The Ugly, and Monsters, Inc.
Green Acres: The Complete Series “31 Nights Of Terror” Contest: Win Vampirina On DVD From Disney