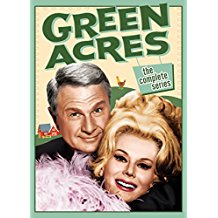 “Green Acres is the place to be…”

It was 1965, and CBS was enjoying the fruits of the era’s fascination with rural sit-coms. Paul Henning was on a roll as a series creator. It started with The Beverly Hillbillies in 1962, where we were all invited to sit a spell with the Clampetts, a rural family who discovered oil on their property and ended up finding out that California was the place they oughta be, more specifically Beverly Hills, complete with “cement ponds” and movie stars. The show was such a success that Henning spun it off into Petticoat Junction a year later. The show covered the happenings at the Shady Rest Hotel which happened to be located at a water stop on the C. & F.W. Railroad in the hick town of Hooterville. Again Henning hit comedy gold. Two years later, Hooterville would be the location for Green Acres, a kind of reverse Beverly Hillbillies. This time a couple from a penthouse apartment in New York City would come to Hooterville and replay the fish-out-of-water routine just as The Beverly Hillbillies had done three years earlier. Green Acres would last until 1971, when all three shows would become victims of the CBS Rural Purge. Under pressure from sponsors who were afraid of losing their urbanite customers, all of these shows were axed. One news reporter at the time reported that “CBS cancelled everything with a tree, including Lassie.”

Oliver Wendell Douglas was played by Eddie Albert. He was a corporate lawyer who really dreamed of being a farmer. His wife Lisa was played by Eva Gabor. She was a city girl through and through. After a patio farm doesn’t really fulfill his ambitions, Oliver ends up buying a broken-down farm in the rural community of Hooterville. The state is never revealed, but we’re told it’s in the Chicago area. The farm was known as the Haney Place and was sold by the show’s ongoing hillbilly con artist Mr. Haney, played by Pat Buttram. Not content with pawning off his useless farm and broken-down house, Haney was always showing up with just what Oliver needed, coincidentally willing to sell said item. It was a running joke of the series that no matter how determined Oliver was not to get taken by Haney, he’d end up buying something anyway. Haney operated under the cover that he conveniently had relatives in positions of power in and around Hooterville, from judges to cops to code enforcement people.

Lisa was the uneducated housewife with a thick Hungarian accent. She had been used to servants and didn’t have the basic skills needed to thrive in her reluctant farm life. Another ongoing joke was her horrible hotcakes and coffee as thick as maple syrup. She promised to give it six months, and CBS made a big deal toward the end of the season when it came time for her to make a decision. The couple appeared on news broadcasts and even as mystery guests on What’s My Line to hype the question of whether Lisa will agree to stay or send the couple packing back to New York. The show lasted six years, so you can likely guess her answer. Gabor actually played pretty much the same shtick that she and sister Zsa Zsa had been playing for years. Lisa used the signature “Dahling” and was terribly overdressed for a farmer’s wife, complete with gaudy jewelry. But deep down the character liked the new home and became more of a willing partner as the seasons progressed.

Of course, the town was populated by all sorts of interesting characters. For the first season the cast of Petticoat Junction appeared often. That eventually ended as the show found its own legs. Important characters included the couple’s hired hand, the naive Eb Dawson, played by Tom Lester. Sam Drucker owned the local store and also wore many hats in the community’s service. His store was where many characters would hang out. It was the information center of the town. He was played by Frank Cady. Alvy Moore played Hank Kimball, the local representative of the State Department of Agriculture. It was his job to give the farmers good advice on their crops. Well… not good advice… not really advice, but suggestions; maybe it was advice. And of course there was Arnold, the pig who loved watching westerns on television and could turn the set on himself.

The show would focus more on the couple and less on other characters by the third season. There would also be a bit more breaking of the “fourth” wall as the characters would begin to address the camera directly. Gabor would eventually even start reading the end credits that she would refer to as the “written bys”. The pair would share a rather awkward chemistry, but it kind of worked anyway. The first season delivered a bit more continuity as the house and farm would be slowly “improved” to its more or less permanent state. They would continue to have fights to get a working phone for years, using a pole that required them to climb to the top to make calls. Another running joke would have Oliver delivering some “patriotic” speech to the sound of drum and fife music in the background. Of course, most of the comedy was derived from Oliver’s attempts to be a farmer. His schemes nearly never worked out, and as much as he wanted to fit in, he was never really able to become a true member of the community. He would yearn for the law at times and occasionally took on a case where he would really feel the most comfortable. The truth was that Lisa fit in more than he did. When you watch many episodes together, you realize it was more repetitive than you might have remembered. Of course, they were never intended to be binge-watched. The theme song became quite popular, but I find myself using the chapter skip to bypass it after a few listens.

While Paul Henning is credited with creating the show, that wasn’t entirely true. The concept came from a 1950’s radio comedy called Granby’s Green Acres. That series lasted less than a year and starred Lucy’s Gale Gordon as the patriarch who moves from the city to the country. None of the show’s characters remain from the handful of radio broadcasts. Fortunately, these radio episodes are included on this release. Other extras include a retrospective with author Stephen Cox, who wrote The Hooterville Handbook. You get a 1966 appearance by both Eddie Albert and Eva Gabor on The Merv Griffin Show.

In the 1990’s Albert and Gabor would reprise their roles for two television specials which are not included in this set. Return To Green Acres featured pretty much all of the surviving cast members. They would also cameo in The Legend Of The Beverly Hillbillies in 1993. Eva Gabor died a short time later from food poisoning, which ended plans for more reunion films. The show would continue to be a hit in syndication for decades. There was a project under development by Richard L. Bare and Phillip B. Goldfine to produce a feature film based on the show. Bare died in 2015, and the project, although never cancelled, hasn’t moved forward. MGM released the first three seasons individually back in the late 90’s, but either poor sales or costs left the remaining three seasons unreleased… until now. Shout Factory has assembled all 170 episodes in a massive 24-disc set. It’s the first time all of the show’s episodes have been available in home video. That’s a lot of time to snuggle up to your television and say, “Goodbye city life.”

Gino Sassani is a member of the Southeastern Film Critic's Association (SEFCA). He is a film and television critic based in Tampa, Florida. He's also the Senior Editor here at Upcomingdiscs. Gino started reviewing films in the early 1990's as a segment of his local television show Focus. He's an award-winning recording artist for Omega Records. Gino is currently working on his 8th album Merchants & Mercenaries. Gino took over Upcomingdiscs Dec 1, 2008. He works out of a home theater he calls The Reel World. Favorite films: The Godfather, The Godfather Part II, The Body Snatcher (Val Lewton film with Karloff and Lugosi, not the pod people film), Unforgiven, Gladiator, The Lion King, Jaws, Son Of Frankenstein, The Good, The Bad And The Ugly, and Monsters, Inc.
Pilgrimage (Blu-ray) War For The Planet Of The Apes (UHD Blu-ray) (4K)