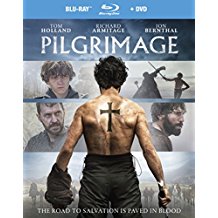 For a gritty historical epic to get the green light these days, it has to have some sort of easy-to-understand hook. (“Hey, it’s sexy King Arthur!”) And it seems like enough people complained about the prevalence of PG-13 action movies that it led to the current boom of R-rated sensations — like Deadpool and the John Wick flicks — that gleefully go to extremes. There is absolutely nothing gleeful about Pilgrimage, and the movie doesn’t seem all that interested in hooking the masses (significant portions of the film are in French, Irish, and Latin). In other words, the most striking and impressive thing about Pilgrimage is also what can make it feel like somewhat of a slog: this movie is dead serious.

Pilgrimage opens with a brief, violent prologue in Cappadocia, 55 A.D., where an unnamed man is brutally stoned to death. It’s a startling, disorienting cold open…and not just because I have no idea where Cappadocia is without the help of Dr. Google. The movie doesn’t bother to explain either, but we eventually learn how this opening sequence crucially ties into the main story, which takes place in 1209 A.D. in Ireland. The nation has been torn apart by centuries of tribal warfare and currently faces the growing influence of Norman invaders.

In a remote corner of Ireland, a small group of monks protect a holy relic. A deeply devout Cisterican monk named Brother Geraldus (Stanley Weber) arrives and informs the other monks that the Pope has decreed the relic be transported to Rome. The mission is of the utmost importance, so some of the monks charged with protecting the relic accompany Geraldus on the dangerous pilgrimage. To help avoid detection, the group is kept relatively small and includes novice monk Brother Diarmuid (Tom Holland) and a Mute (Jon Bernthal) taken in by the monks years earlier. The Mute’s physicality and fighting skills come in handy when the group encounters danger in the form of Norman soldiers — led by the vicious and sniveling Raymond De Merville (Richard Armitage) — and some savage enemies in the forest.

“All I ask is for a bit of faith…is that hard?”

Although the storytelling gets a bit muddled during the first act as we try and sort out the various factions, the film’s premise is ultimately pretty straightforward action movie stuff: a group of guys have to transport something valuable across dangerous terrain. What gives Pilgrimage some extra juice is the direct role that faith plays in their mission. Namely, how does the power of the relic manifest itself? Geraldus seems convinced that the holy artifact has granted the “damaged” Mute some sort of divine ability to strike down any unworthy person who tries to possess it. Then again…maybe the Mute was already really good at killing people.

Pilgrimage is written by Jamie Hannigan, and the most intriguing parts of the story have to do with the way men use artifacts like the relic to justify their actions. For Geraldus, protecting the relic is more important than the lives of his traveling companions. Meanwhile, there are others who seek to use this supposedly holy artifact as a political bargaining chip. The idea that the holy relic only possesses as much power as men like Geraldus assign to it is pretty heady stuff for a movie in which one character brutally and methodically removes another man’s entrails.

“No one but the pure of heart can touch the relic and live.”

The director is Brendan Muldowney, who brings a gritty, grimy realism to the proceedings that serves as an interesting counter to the film’s supernatural elements. (The forest assault at the movie’s halfway point and the beachside climax are standout sequences.) The fact that Pilgrimage tells its story with a straight face — without ever winking at the audience or tipping its hand with regards to the relic’s power — is bracing and effective. I do wish Muldowney and Hannigan had found a way to balance out some of the relentless grimness. I’m not at all suggesting the movie add a goofy comic relief character, but some variety would’ve been nice. Instead of spending all our time with the fractious fellowship, some varying points of view (from Rome or some additional scenes at the monastery or with the Norman soldiers) probably would’ve helped break up the monotony.

Holland has recently charmed audiences as the newest Spider-Man, and the young actor shows some impressive dramatic range here. Diarmuid is physically a pipsqueak, but he displays strength and heroism in standing up for the Mute. Holland’s character also represents the central conflict of the movie — is protecting the relic worth sacrificing your soul — and the actor often conveys a lot without having to rely on dialogue. Speaking of conveying a lot without dialogue, Bernthal smartly avoids some potentially dodgy accent work by staying quiet on screen. The former Walking Dead actor continues his streak of physically imposing performances, though he does add a layer of soulfulness to the Mute. Meanwhile, Weber’s fanatical work as Geraldus made him just as good an antagonist as Armitage’s more outwarly evil (but also more one-dimensional) bad guy.

Pilgrimage is presented in an aspect ratio of 2.35:1. The 1080p image is arrived at with an AVC MPEG-4 codec at an average of 24 mbps. Although director Brendan Muldowney doesn’t shy away from direct sunlight and appears to be a fan of lens flare, the image here is relentlessly gray and largely drained of color. That includes the panoramic shots of the stunning Irish countryside; what these scenes might lack in lush greens — the greens are so dark here, they are largely indistinguishable from the color of dirt — they make up for in detail and clarity. Black levels are impressively inky, which is especially crucial here since so much of the image is gray and doesn’t offer as many opportunities for contrast. It might sound like I’m criticizing this video presentation for its lack of flair, but it’s actually a great fit for this ferociously grim action movie.

The DTS-HD Master Audio 5.1 track is as muscular and brawny as the action on screen. The subs provide solid support for the percussive sections of Stephen McKeon’s score along with more obvious sonic cues (like a foreboding thunderstorm). Meanwhile, the rear speakers find plenty of ways to contribute during sequences without music. Since almost all the action takes place outdoors, we get some subtle and consistent gusts of wind and other atmospheric noises across all channels. I expected a bit more directionality (and chaos!) during the forest scene where the monks are attacked from all sides by a savage tribe, but what that sequence lacked in immersion it made up for in impactful death blows. The English/Irish/French/Latin dialogue all comes through cleanly.

All of the bonus material — including each self-explanatory featurette — is presented in HD.

The Making of Pilgrimage: (11:06) A pretty standard featurette with comments from cast and crew. They all have plenty of praise for the script by Jamie Hannigan, which is removed from the modern world but includes themes that are relevant today. It’s also refreshing to see cast members (particularly Holland and Weber) goof around behind the scenes, since there is absolutely nothing goofy in Pilgrimage.

The Dance of War —The Fight Choreography of Pilgrimage: (2:10) The spotlight is on fight choreographer Paul Burke. We also learn the actors did their own stunts; we get a side-by-side look at them learning the choreography and the finished product.

Building an Army — The Visual & Make-Up Effects of Pilgrimage: (2:51) While the action/fight sequences in Pilgrimage are as real as it gets, visual effects were used to expand the size of the Norman soliders’ camp, for example. Weber and the actors who play the monks also bemoan their unfortunate haircuts.

Sounds from the Past —The Languages & Music of Pilgrimage: (3:02) The film features dialogue in English, Irish, French, and Latin. Armitage particularly enjoyed acting in French; the actor says he felt more violent whenever his villainous character spoke French.

Setting the Scene — The Locations of Pilgrimage: (1:57) Cast and crew gush about the fact that Pilgrimage shows off “the real Ireland.” (The forest scenes, however, were shot in Belgium.) Holland says not much acting was required when his sheltered character had to act like he was awed by the Irish scenery.

Pilgrimage arrived on Blu-ray precisely a week before Holland’s web-slinging turn in Spider-Man: Homecoming, which doesn’t feel like an accident.

I happen to think Homecoming is great, but it’s also a perfect example of the sort of PG-13 action flick that has almost completely pushed more serious-minded (and more violent) action epics like Pilgrimage out of multiplexes. While it’s not designed to be a rollicking time at the movies, Pilgrimage deserves a look on its own merits. So I’m glad RLJ Entertainment is putting it out there with a solid A/V presentation and some decent Making Of featurettes.

Tuesday Round Up: October 24, 2017 Green Acres: The Complete Series