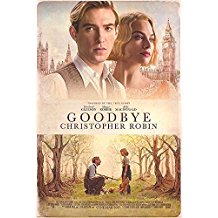 “Once upon a time there was a great war that brought so much sadness to so many people. Hardly anyone could remember what happiness was like. But something happened that changed all that…”

“Winnie the Pooh doesn’t know what to do …” starts a popular song written by Kenny Loggins, recorded first in 1970 by the Nitty Gritty Dirt Band with a more popular and enduring version by Loggins And Messina a year later. Hundreds of millions of children since the 1920’s know who Winnie the Pooh is. He’s the happy-go-lucky bear who lives in the 100 Acre Wood with Piglet, Tigger, Owl, Rabbit, Eeyore, Kanga, and Roo. But Pooh’s best friend of all was a young boy named Christopher Robin. The books have entertained children for nearly 100 years. Walt Disney introduced us to very different but equally as endearing animated versions in the 1960’s. The stories have continued with Saturday morning cartoons, feature films, and an upcoming live action Disney production. Pooh and his friends remain a fond memory for most of us. But most of us don’t know the story behind the iconic characters. Goodbye Christopher Robin does an admirable job of bringing that story to life as vividly as the stories have brought Pooh to life over the years. But this is not really a happy story at all. Real life seldom is, and I credit director Simon Curtis for being brave enough to tell the unhappy story without so many of the trappings of Hollywood and the need to have our stories end in happily ever after.

Alan Milne (Gleeson) is an English playwright who is called to service during World War I. He returns from the war suffering what was then called shell shock and what we today refer to as Post Traumatic Stress Disorder (PSTD). He is finding it hard to tell the same kind of frivolous stories after witnessing such horror. His wife Daphne (Robbie) can’t seem to understand why he is not producing new work. The two have a child they name Christopher Robin (Tilston), and the three move out to the country where it is hoped that Alan might be able to write once again. They are far from doting parents, who treat the child they call Billy Moon as an accessory more than a son. The real parenting falls to Olive, the nanny, played by Boardwalk Empire’s Kathy Macdonald. It’s no surprise that the boy bonds more with Olive than his own parents. But when circumstances take the two women out of the picture for a while, Alan begins to connect to his son. Before long they are enjoying wonderful fantasies about the surrounding woods, and more interestingly sharing these adventures with Billy’s menagerie of stuffed animals. The diversion dawns as a bit of an epiphany for Alan, who brings in a friend to start sketching the animals and Billy. He starts to write down these flights of fancy, and Winnie the Pooh and his buddies, including Christopher Robin, become an international sensation. This is where you might expect the screen to display the usual “and they all lived happily ever after”. But I warned you. This is a true story, and those rarely end in happily ever after.

The burden of success oddly doesn’t fall on Alan, but rather his son. Everyone wants to meet the real Christopher Robin, and before long the 8-year-old is doing telephone interviews, photo ops, and press conferences. Of course, the parents are reveling in their new-found fame and fortune. Only Olive notices the strain on the child. She’s forced to resign when she dares to broach the subject with the parents. Billy Moon is sent away to boarding school where he just can’t escape Winnie the Pooh and suffers years of teasing and bullying that we witness in a short montage until the 18-year old Billy emerges, now played by Alex Lawther. When a second world war erupts, Billy feels the need to enlist. Of course, Alan knows the horrors of war, and both parents are against his enlistment. He leaves, bitter about his childhood and his parents.

Here’s where the film, picking up on a cliffhanger, decides to intrude on the more honest emotions and teases us with the child’s likely death in the war.

Goodbye Christopher Robin works on quite a few levels. The cinematography delivers a wonderful period piece capturing the era’s English countryside. You won’t find the Milnes likable, and I’ve heard some complain about that point. But you shouldn’t like them. They are horrible parents who sacrifice the childhood of their son for fame and fortune. Certainly Alan eventually comes to that realization himself and decides to stop writing about Pooh and his friends. But the damage has already been done by that point. The two leads do a remarkable job of portraying these socialite parents and their neglect. The film isn’t afraid to reveal the nastiness, and for the most part avoids a sappy ending. That’s not completely true, but it isn’t as conventional as you often get. All in all the film tells a compelling story that is intended to make you feel uncomfortable. It would have been better had young actor Will Tilston had been better, but he’s a young actor, and the material must not have been all that easy for him. He’s not helped by the bowl haircut. Still, a stronger child actor could have increased the quality of the material. Again, I can’t come down too hard on young Tilston, who obviously put some effort into the role.

Another problem is the trailer and marketing for the film. Not surprisingly the studio really pushes the Winnie the Pooh connection, leaving one with the feeling that this is a family film and one appropriate for the kids. It’s not. There were children in our press screening, and they were all quite restless by the final third of the film. The film touches on some serious subject matter that will go over the heads of most children. There are also some frightening moments to be found in Alan’s war flashbacks and his instability because of his experience. Don’t bring the children. In spite of the PG rating and the connection to Pooh, this is an adult film, and your kids will be squirming uncomfortably before it ends.

Finally, the film has a likely unintended effect that I’m not quite sure what to make of. There’s a little bit of guilt it gives us that we have all enjoyed these stories and characters so much over the years. It will be hard to watch or read anything Pooh-related in the future without taking at least a momentary pause to ponder the cost the material had on the real Christopher Robin. Perhaps it will help to remember also that Milne’s intent was to find a way to bring happiness back to a world torn apart by war. And just as in war, there was collateral damage. Christopher Robin bore the brunt of that damage, maybe so we wouldn’t have to. “A toast to C.R. Milne.”

Gino Sassani is a member of the Southeastern Film Critic's Association (SEFCA). He is a film and television critic based in Tampa, Florida. He's also the Senior Editor here at Upcomingdiscs. Gino started reviewing films in the early 1990's as a segment of his local television show Focus. He's an award-winning recording artist for Omega Records. Gino is currently working on his 8th album Merchants & Mercenaries. Gino took over Upcomingdiscs Dec 1, 2008. He works out of a home theater he calls The Reel World. Favorite films: The Godfather, The Godfather Part II, The Body Snatcher (Val Lewton film with Karloff and Lugosi, not the pod people film), Unforgiven, Gladiator, The Lion King, Jaws, Son Of Frankenstein, The Good, The Bad And The Ugly, and Monsters, Inc.
“31 Nights of Terror” The Park (Xbox One) “31 Nights Of Terror” Release Announcement: RLJ Entertainment Announces The Limehouse Golem