Posted in: Game Reviews by Michael Durr on October 29th, 2017

When I was growing up in Charlotte, NC I grew up within spitting distance of an amusement park called Carowinds. To this day, I remember being dropped off by my parents at 11 or 12 years of age for a fun day at the park (which is pretty much unheard of these days). I always thought it was neat because there was a place in the park where I could be in North Carolina and South Carolina at the same time. It never bothered me that I was by myself. These days, I’d probably be scooped up by park security or some creepy guy in a white van. Which leads to our game review today, The Park. Somehow, I don’t think this experience is going to be quite as fun (and probably will include a van and a creepy guy too). 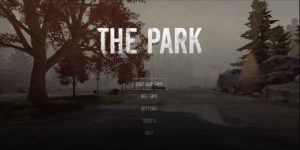 Lorraine and Callum sit in a parking lot about to drive away from Atlantic Island Park. Lorraine is a single mother whose husband died in a tragic construction accident. Callum is the resulting offspring who has just realized that he lost his teddy bear at the park. Rather than tell him she will get him a new one at a toy store down the road, she leaves him in the car and walks toward the entrance.

She is greeted there by one of the park attendants who tells her rather calmly that her son has went back into the park to retrieve his teddy bear. Lorraine frantically waits for the gates to open as the attendant pushes the button to unlock it. She rushes inside to the escalator and gets on.

The park starts to close as she gets off the escalator. Things are winding down and then everything gets eerily silent. The silence is then broken by Callum who races off in the distance. The mother calls out after the child who is heading straight for the Tunnel of Tales which is a ride based on Hansel & Gretel. But much like the classic fairy tale, things aren’t always as simple and sweet as they seem. 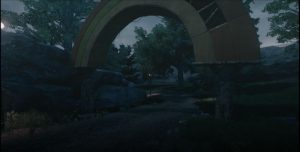 The graphics in this game are very well done for the most part. The game plays a delicate balance between normal shots (which I’ve included on purpose not to spoil the story) and very creepy (and sometimes disgusting) shots. I can safely say they all look fantastic and if you are enjoying the game, then you might linger in a scene or two finding pieces of scenery to stare at.

Staying in that scenery to investigate further objects will enable you to get a few more trinkets to the story, especially at the last twenty minutes. There are a few clip in issues when the character collides with a certain object but nothing too distracting. I would have liked to see a mode where nothing tense was going on (unlocked after the story was completed) that allowed you to stroll around in The Park so one could look at everything. Peaceful, not running after Callum.

One of the first things shown in the game as you load it up is that the game is intended for headphones. Place them on and immersive yourself in the experience. While I did do that for a little bit (I’m something of a scaredy cat so it did not last long), I can say that it lives up to that part of the bargain. Sounds that you didn’t really think were there or the screech of a ride car really come alive and it helps to unsettle the character and the player at the same time.

The game further does this by emulating a heartbeat at certain key moments which could have been easily my heart as well. The music also helps to set the mood but does play a second fiddle to the proceedings. It is meant to help set the mood, it never felt like it was at the forefront of what was going on. Dialog is strong here and easy to read. But I would be amiss if I did not thank the developers for producing subtitles that are clear and easy to read (set through the menus). 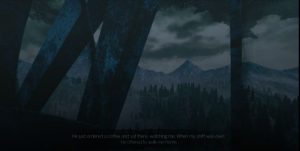 As explained above, Lorraine is a troubled single mother who has lost her son at the amusement park. You spend the game learning about the relationship between Lorraine and Callum as well as the history of the park. This is through various notes, photographs, and bits of memorabilia strewn through the park.

The game is relatively simple, you simply walk (or run) from area to area and examine objects. After the player examines some objects, then they ride the rides and this is where one loses some grips on reality. The screen will purposely become distorted, the character might have some weird flashback or it might show a horrifying scene that happened there once a long time ago. Events that happen during the game will also open up new areas for you to explore.

The only other thing you can really do is hit your B button which will let you scream after Callum (which does open up some interesting dialog, especially later in the game). But these repeated movements are done over and over again. They are only held up by the excellent and extremely unsettling story that is unraveling. Until the final credits roll, there is no way to have a “game over” situation (I suppose you could turn it off) for your character. The Park is meant as an experience, calling it an interactive 90 minute to two hour movie would be completely accurate. 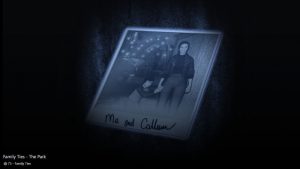 Once the game is over, there really is not much to do unless you want to show the experience to a friend or loved one. It is the very definition of one and done, move on to the next game. I mean, I guess you could look for more missing objects (there are nearly a hundred to find) but you aren’t missing that much.

The achievements also reflect this notion. There are fourteen achievements, ten of which cannot be missed as you progress through the story. The remaining four are for finding a few extra things strung through the game (mostly in the beginning) and feel incomplete. There is no reason we could not have had more achievements (that were missable) through the middle and later parts of the game.

Heck, I think they could have thrown in a carnival game or two instead of everything centering around rides. No, I’m not talking about the Darkness II (Xbox 360) where you had to actually get a certain score during a level. That was ridiculous…just a scene or two played out in the framework of the game which would have strengthen this game a little bit. 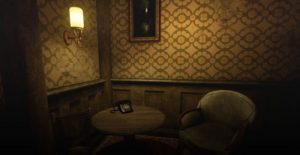 My time with The Park was short-lived. I played it in a couple of sessions broken up by this thing I call a wife and a kid but one could have easily played it one night alone with the headphones on for a couple of hours. The graphics are great (except for a few clip-in issues) and so is the music. They alone can hook you in.

But gameplay is extremely simplistic and once you finish the game, well that’s really it. The achievements do not give it any further life and that does serve as a huge disappointment. Thankfully we do have the story to fallback on, at least for a little while. While I reviewed this game on the Xbox One, it is also available for the PC and Playstation 4 platforms.

Furthermore, if you are an Xbox Gold member, you can have this game for $5.20 which at this price is worth your time. One last thing, it is very easy to judge the mother, our main character of the story, but being a single mother is never a walk in the park…even though this game is. Enjoy.

Michael Durr has been reviewing movies for the better part of fifteen years now. He primarily enjoys thrillers, sci-fi, animation and even a little courtroom drama. His favorite films include Escape from New York, the Goonies and anything with Alyssa Milano. When he’s not praising Kurt Russell as the greatest actor of our time or scratching his head over a David Lynch flick, he’s spending time at home in Texas with his lovely wife, Lori and his amazing son. How they put up with him is a mystery, but even Basil Rathbone doesn’t have the time to solve that one.
“31 Nights of Terror” Oxenfree (Xbox One) Goodbye Christopher Robin