Posted in: Release Announcements by Gino Sassani on October 31st, 2017 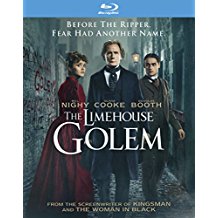 LOS ANGELES (October 12, 2017) – RLJ Entertainment (NASDAQ: RLJE) is set to release the action film THE LIMEHOUSE GOLEM on DVD and Blu-ray on Nov. 7, 2017.  Based on the novel “Dan Leno and the Limehouse Golem” by Peter Ackroyd with a screenplay by acclaimed writer Jane Goldman (Kingsmen, The Woman in Black), the film is directed by Juan Carlos Medina (Painless) and produced by Stephen Woolley (Their Finest, Interview with a Vampire), Joanna Laurie (Hyena) and Elizabeth Karlsen (Carol).  THE LIMEHOUSE GOLEM stars Bill Nighy (Love Actually, Underworld), Olivia Cooke (Me and Earl and the Dying Girl, “Bates Motel”), Douglas Booth (Pride, Prejudice and Zombies, Noah), Daniel Mays (“Line of Duty”) and Eddie Marsan (Sherlock Homes, “Ray Donovan.”)  RLJE will release THE LIMEHOUSE GOLEM on DVD for an SRP of $27.97 and on Blu-ray for an SRP of $29.97.

The city of London is gripped with fear as a serial killer – dubbed The Limehouse Golem – is on the loose and leaving cryptic messages written in his victim’s blood. ?With few leads and increasing public pressure, Scotland Yard assigns the case to Inspector Kildare (Bill Nighy) – a seasoned detective with a troubled past and a sneaking suspicion he’s being set up to fail. ?Faced with a long list of suspects, including music hall star Dan Leno (Douglas Booth), Kildare must get help from a witness who has legal troubles of her own (Olivia Cooke), so he can stop the murders and bring the killer to justice.

Gino Sassani is a member of the Southeastern Film Critic's Association (SEFCA). He is a film and television critic based in Tampa, Florida. He's also the Senior Editor here at Upcomingdiscs. Gino started reviewing films in the early 1990's as a segment of his local television show Focus. He's an award-winning recording artist for Omega Records. Gino is currently working on his 8th album Merchants & Mercenaries. Gino took over Upcomingdiscs Dec 1, 2008. He works out of a home theater he calls The Reel World. Favorite films: The Godfather, The Godfather Part II, The Body Snatcher (Val Lewton film with Karloff and Lugosi, not the pod people film), Unforgiven, Gladiator, The Lion King, Jaws, Son Of Frankenstein, The Good, The Bad And The Ugly, and Monsters, Inc.
Goodbye Christopher Robin Firefly: 15th Anniversary Collector’s Edition (Blu-ray)