Posted in: The Reel World by Gino Sassani on November 16th, 2017 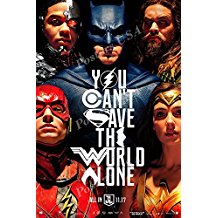 “We have to be ready. You, me, the others… there’s an attack coming from far away.”

The DC and Marvel rivalry can be quite fierce at times. I never completely understood the polarized fan base, however. Some of us are just fans of the genre and will welcome a good comic book movie from either and preferably both studios. When it comes to a cinematic universe, however DC has had some real issues with trying to bring together a combined hero world. Most of the films leading up to Justice League have been dark and filled with brooding heroes. With Batman that kind of thing is appropriate and works. With Superman it has been a severe letdown. When the two came together in Batman vs. Superman, the disappointment started to lead to a resigned conviction that DC was doomed to repeat the same mistakes over and over again. Then came Wonder Woman, and it was no surprise that she was the single standout of the caped-hero duel. Wonder Woman, both the character and the film, appear to have changed something in the DC landscape, and she is, once again, the single most hopeful character in Justice League. And while Justice League isn’t quite the movie that Wonder Woman was, there are signs that things are changing. Justice League is not a great movie. But it’s not a bad film, either. Superman actually smiles and has begun to return to the “golly” innocent of his best comic years. This film may not be everything we fans of both brands were hoping for, but it’s actually a good start.

The film doesn’t waste any time in getting to the action. As it opens we find Batman (Affleck) is already dealing with winged bug-like creatures that are drawn to fear. What he doesn’t yet know, but senses, is they are the harbinger of something really bad. With Alfred’s (Irons) help he begins to assemble the group of superheroes that he has been monitoring since the last movie. We are then treated to his first encounters with Aquaman (Momoa) and Barry Allen aka The Flash (Miller). With Wonder Woman’s (Gadot) help, they also enlist Cyborg (Fisher). It takes some convincing to recruit all but The Flash, who is as giddy as a certain Parker lad from another franchise. This Barry Allen is quite young and becomes the audience’s gateway into the film. The project works best when we’re experiencing it all through his eyes. When the big bad, Steppenwolf (voiced by Ciaran Hinds) appears, the band fully comes together.

Steppenwolf is after three artifacts called mother boxes. They are alien in origin and are extremely destructive if brought together. They have been entrusted to three groups or races of beings. The first can be found in the care of the Amazonians. The Atlanteans care for the second, while the third has been entrusted to the humans and looked after by Cyborg’s scientist father and the one who made him what he is to save his life, Dr. Silas Stone (Morton). The heroes have to try to keep Steppenwolf from destroying the world by bringing these boxes into something called Unity. For our purposes here, Unity is a bad thing. But there is one task to complete before they can hope to defeat the god-like villain. Let’s just say that this hero required some CG mustache removal before he could be ready for prime-time. His mustache isn’t the only thing that is removed. Justice League is obviously working on expanding the female audience who responded to Wonder Woman. At some point in the film we see Superman, Batman and Aquaman running around without their shirts. Reminds me of the old days of Captain Kirk’s tear-away uniforms in the original Star Trek. If you think I’m making a big deal out of nothing, I can tell you these scenes were the talk of the crowd for the women when they were leaving the theater.

For several months the big story was the fact that Zack Snyder was stepping away from the film before it was finished. He had lost a child, and one can only imagine the devastation that was playing for the director. Joss Whedon, who had started the Avengers films for Marvel, stepped in to finish the movie. There were talks of extensive rewrites and reshoots. To what extent all of that occurred is open to speculation. I feared that the two styles would clash and it would be fairly obvious who directed what material. I’m pleased to report that this particular issue does not haunt the movie. I suspect that Wonder Woman’s part grew at some point because of the success of her solo film and the fact that Whedon has expressed interest in working with that character for decades. He came close to both a television series and a feature film at various times over the years. Of course, whatever additional part she plays is welcome. It doesn’t really matter who wrote or directed the scenes. Now we’ve learned that Snyder’s exit from this universe is more permanent and complete. There’s much to be discovered down the road how that will change the cinematic universe.

It’s not the change of directors that ends up the film’s biggest flaw. Like so many comic films from both brands, Justice League suffers from villain issues. Steppenwolf is not a particularly strong character. He basically shows up and everyone pretty much knows who he is. His motives are somewhat obscure, and there is little development of the character. He’s the cookie-cutter kind of a bad guy who merely spouts a lot of ego “I’m gonna kick your butt” tripe with no real connection for us. It’s a good thing that the film provides an entertaining enough ride, or this movie could have quickly descended to the depths of Batman vs. Superman. And that’s the real story here. There is such a thin line between a good movie and a bad movie that the tiebreaker goes to the amusement-park-ride thrill that allows you to leave with a smile. They say there’s a thin line between love and hate, and I haven’t seen that demonstrated in a film so much as it is here.

Finally we get to meet the other players in this cinematic universe. Ezra Miller is the most interesting. I pretty much hated him the first few minutes of his screen time. But there’s something about his naive passion that becomes rather infectious and covers for a pretty lame costume and somewhat awkward performance. But Miller makes that awkwardness pay off, and it goes from being a liability to an asset. Ray Fisher is the wildcard here as Cyborg. He’s the least developed and likely least known of the group. It would have been better for a solo film to have come first. Like the villain, he kind of gets thrown in there. He does have great chemistry with Gadot, and those are his best moments. I suspect there is a stronger character in there, and I’d like to see Fisher get the opportunity to bring it out. Of course, we’ve been in love with Jason Momoa since Stargate: Atlantis. An interesting start for an actor destined to play the King of Atlantis in the DC world. His force-of-nature presence more than makes up for the lack of time to develop his story. Momoa tells you everything you need to know about Aquaman by just posing. I can’t wait to see his upcoming solo film.

It’s a treat to see Gal Gadot again. She’s truly become the rising star in the DC landscape. It’s hinted that she’s destined to lead this group, and deservedly so. Affleck appears to be playing out his time as Batman. He’s got tremendous chemistry with Jeremy Irons as Alfred, but I got the feeling he wasn’t all-in here. He’s dropped out as director of the next solo Batman film, and recent interviews suggest he’s not a lock to even play the role again. Henry Cavill doesn’t get much screen time here. There’s that whole being dead thing that gets in the way for a while. When he returns, the bad CG mustache-removal takes a little off the performance, but he appears to be evolving into the kind of Superman Richard Donner used to make us believe a man could fly back in 1978. It’s nice to see characters from the three established characters’ films return. That includes J.K. Simmons as Gordon, Amy Adams as Lois Lane, and Connie Nielsen as Queen Hippolyta.

There are two stingers. One is a playful moment, while the other sets up the future of this franchise. It’s all kind of exciting, and like I said in the beginning, I’d call this a pretty good start. “That feels like an oversimplification.”

Gino Sassani is a member of the Southeastern Film Critic's Association (SEFCA). He is a film and television critic based in Tampa, Florida. He's also the Senior Editor here at Upcomingdiscs. Gino started reviewing films in the early 1990's as a segment of his local television show Focus. He's an award-winning recording artist for Omega Records. Gino is currently working on his 8th album Merchants & Mercenaries. Gino took over Upcomingdiscs Dec 1, 2008. He works out of a home theater he calls The Reel World. Favorite films: The Godfather, The Godfather Part II, The Body Snatcher (Val Lewton film with Karloff and Lugosi, not the pod people film), Unforgiven, Gladiator, The Lion King, Jaws, Son Of Frankenstein, The Good, The Bad And The Ugly, and Monsters, Inc.
Home Alone 2: Lost in New York (25th Anniversary Edition) (Blu-ray) Wonder