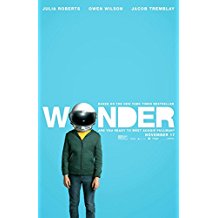 Touching and inspirational, the movie Wonder opens the eyes of its audience to the medical anomaly of Treacher Collins Syndrome.  It’s a gene glitch that causes a facial difference that happens in one of 50,000 people*.  Based on a book by R. J. Palacio, the film handles the material in the novel in such a way that one cannot help but fall in love with a boy with TCS named Auggie Pullman.  The movie becomes an inspiration to all children and a force behind anti-bullying.

Auggie (Jacob Tremblay) was born with a facial deformity and has had limited mainstream contact of everyday outside life.  In fact, upon going out for activities he uses a toy astronaut helmet complete with a dark solar visor to hide his face. Since it has been difficult for him to take comments regarding his looks, Auggie has been homeschooled all of his life up until now.  He has finally reached fifth grade level, “middle school”, and his mother, Isabel (Julia Roberts)  has decided that he attend a public school.

An understanding husband, Nate (Owen Wilson) has misgivings about his interaction with children, especially since they can be cruel. Also concerned, his sister Via (Izabela Vidovic) has very little to say about the decision, since she’s several grades ahead of Auggie and attends high school.

It’s the first day of school, and Isabel and Nate have brought Auggie to the precipice of his new life among children of his own age group. Still very doubtful that he would want to face this new adventure, the principal, Mr. Tushman (Mandy Patinkin), decides to appoint three kids, Jack Will (Noah Jupe), Julian (Bryce Gheisar) and Charlotte (Bryce Gheisar) to show him around the school.

Thus begins a year of mixing in, finding a friend, standing up to bullies, fending off name calling and, oh yes, showing that he’s the smartest kid in school, especially in science.  Director and screenplay co-writer Stephen Chbosky puts together one of the most amazing films of 2017 showing how the boy deals with all the challenges in a way that’s both motivating and compassionate.

Now, the film is not maudlin or even self-pitying, but a straightforward “what would you do if you were in the situation” kind of film. In fact, it opens a door to acceptance for those who are afflicted with TCS.  The film should gain a lot of new advocates and supporters of the children afflicted with the genetic defect, as there’s really no better way of opening the eyes of the public than a film like Wonder.

Playing the part of Auggie, Jacob Tremblay takes a chance at the difficult role and comes up a winner.  He’s terrific as the determined child who has to face a world at the toughest time in his growth, “the Tweens”.  Each competing for their position in the chain to high school, Tremblay pulls off the challenging role and makes it heartwarming, compelling, and triumphant.

In acting support are the many child actors that pull off a realistic situation drama.  Together with fine direction by Stephen Chbosky, they reveal the respect for each other no matter what one looks like, acts like and dresses like.  One of the best lines in the film is the question and answer “When given the choice between being right and being kind, choose being kind.”

Wonder has been rated PG by the MPAA for thematic elements including bullying, and some mild language. The book and now the movie shows some of the most chronic problems in our nation troubling tweens to early teens including prejudice, clicks and bullying. Wonder makes an effort to offsets these troubles with self-acceptance, honesty and friendship.

An extremely well written script, with fine direction and acting.

John Delia has been on all sides of the movie business from publicity, writing for publications and on line blogs, script writing, to film making. Writer, critic, film editor he has worked as a film critic on this second go around for 14 years. He earned his Bachelor’s degree at the college of Journalism and Communications at the University of Florida in Gainesville, Florida. John is an active member of the Southeastern Film Critics Association (SEFCA) . Favorite Films: Lord of the Rings/Hobbit trilogies, The Godfather trilogy, the Indiana Jones trilogy (I didn't like the 4th), The Avengers and for TV it's Game of Thrones. As for animation it's a tie between anything Pixar and everything Hayao Miyazaki.
Justice League Lady Bird