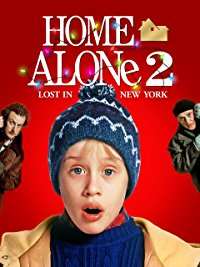 I can still remember sitting in a movie theater in Puerto Rico watching Home Alone 2: Lost in New York for the very first time. (With Spanish subtitles, of course.) I was basically the same age as Kevin McCallister — the precocious, pint-sized pre-teen played by Macaulay Culkin — and I’d pretty much worn out my VHS copy of Home Alone by the time the second movie was released. So it’s wild to think that this film is now old enough to rent a car! Fox has released a 25th anniversary Blu-ray of the blockbuster comedy sequel, and it’s a fun, fascinating re-watch for a variety of reasons.

For starters, I am now closer to Kevin’s parents’ age than Kevin himself. I’m also pretty sure this is the only movie in the franchise that featured a cameo from a future U.S. President.

“This is the greatest accident of my life!”

All kidding aside, this sequel does tweak the premise just enough. Instead of outright abandoning Kevin at home, his parents (Catherine O’Hara, John Heard) lose track of him at the airport. The result is the McCallister family winding up in Miami for a tropical Christmas — this movie is *not* kind to Florida, by the way — and Kevin accidentally ending up in the Big Apple. With his dad’s credit card in tow, Kevin does what any kid in New York City would do: visit practically every major landmark…and stay in the most expensive suite at the Plaza Hotel! (At the time, the hotel was owned by Donald Trump, who makes a cameo.) As a result, Kevin is forced to dodge the nosy hotel staff — led by Tim Curry’s haughty concierge — along with the Wet Sticky Bandits, who are in New York to rob a massive toy store on Christmas Eve.

Like its predecessor, Home Alone 2 is directed by Chris Columbus and written/produced by the late great John Hughes. The location shift ends up being this movie’s best and most notable asset. (Even though it is utterly absurd that, not only do Kevin and the burglars from the first movie end up in a completely different city at the same time…but they run into each other more than once!) Simply put, New York City looks magnificent. I’ve had the pleasure of spending the holidays in NYC, and there’s no place on Earth like it. In addition to filming inside the actual Plaza Hotel, there are tremendous exteriors throughout this movie, including a bittersweet money shot of Kevin atop the Twin Towers. (The scene has been edited out of subsequent TV broadcasts, but appears in full here.)

Yet despite the drastic change in locale, this is basically the same movie as the wildly successful original. Kevin is still frightened by an outwardly creepy elderly person — this time it’s Oscar winner Brenda Fricker as a pigeon enthusiast — before realizing she is actually ***SPOILER ALERT*** super nice. We get an amusing follow up to fake gangster flick “Angels with Filthy Souls” called…“Angels with Even Filthier Souls.” Meanwhile, Kevin’s family — except perhaps for his genuinely concerned mom — continue to be monsters.

This is actually the biggest shift I experienced in watching this movie as an adult; the bad guys are supposed to be Harry/Marv and the snooty hotel staffers, but I would argue the criminally negligent McCallisters are the the real villains. There’s a scene where Kevin’s mom Kate berates Curry’s concierge for letting Kevin leave the hotel; all I could think was, “How about the time where you lost track of him and he ended up in an entirely different state?!” The second biggest shift I’ve experienced watching the Home Alone movies as an adult is that I am totally on board with the notion that trap-happy Kevin grew up to be Jigsaw.

It’s easy to see why Culkin became a superstar in the early-to-mid ‘90s. On top of the smart-aleck charm and cute-kid looks, Culkin was just good at acting at a very young age. (In addition to his personal demons, having the same face as a grown-up that he did when he was 12 hasn’t done his adult acting career any favors.) Culkin has good comedic timing and credibly goes toe-to-toe with massive personalities like Pesci and Curry. Pesci and Stern continue to be surprisingly game to get the absolute crap kicked out of them, while Curry, Rob Schneider (as a bellhop) and others represent higher-class foils for Kevin.

Home Alone 2: Lost in New York is presented in an aspect ratio of 1.85:1. The 1080p image is arrived at with an AVC MPEG-4 codec at an average of 19 mbps. There’s some really nice filmic grain throughout, and it’s an especially good fit for the many exteriors filmed on the streets of New York. Colors are plentiful in this bright, kid-friendly adventure, but they appear more muted here than they probably would if the movie were made today. Overall, this is a clean and pleasing — if not exactly mind-blowing — visual upgrade for a 25-year-old movie.

The DTS-HD Master Audio 5.1 track has more going for it than the typical dialogue-driven comedy. Unfortunately, not all of it is good. I can’t say if this has been an issue in previous Home Alone 2 releases, but the mix here is off to the point where I had to turn my sound system way up to hear the dialogue…only to scramble and turn it back down when a song blared from the soundtrack. (For the record, I reviewed another movie with a DTS-HD Master Audio 5.1 track immediately before this title, and didn’t have this issue.) Otherwise, this is a chipper enough presentation. I expected more ambient/surround noise for the rears, but that is mostly where John Williams’ outstanding compositions live. The abuse that Kevin inflicts on Harry and Marv does feel extra painful thanks to the subs punctuating each blow.

Theatrical Trailers: You get the previews for Home Alone, Home Alone 2, and (sigh) Home Alone 3.

I’m glad Fox has re-released Home Alone 2 on Blu-ray, but it’s purely for selfish reasons. The disc offers zero new special features, and the bonus material that is included here isn’t noteworthy at all. And while the A/V presentation is decent, I don’t imagine it’s a huge upgrade from previous HD releases.

Instead, I’m happy this 25th Anniversary Edition exists because it gave me a reason to revisit a childhood favorite. Kid Me would probably be underwhelmed by the rating Present Day/Critical Me is awarding this movie, but I still had fun taking this trip down memory lane…and just in time for the holidays.