Posted in: The Reel World by Gino Sassani on November 21st, 2017 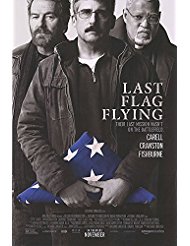 Last Flag Flying was adapted from a book by Darryl Ponicscan which is a sequel to his The Last Detail. That book was adapted for the screen in 1973 and starred Jack Nicholson, Otis Young, and Randy Quaid and was directed by Hal Ashby for Columbia Pictures. In The Last Detail we find two characters taking Randy Quaid’s character to the Navy prison for stealing $40 from the CO’s wife’s favorite charity drive. Along the way they all bonded a bit, and the film played out as a statement, of sorts, to the Vietnam era we were just finally about to put behind us in a year. Last Flag Flying is based on the written sequel but is not exactly a true sequel to the earlier film. Once again Darryl Ponicscan has adapted the screenplay from his own novel. But there were some complicated rights issues to deal with here. Columbia owned the rights to the characters for film purposes but not the sequel novel. So the characters’ names are changed, as are the circumstances that played out in The Last Detail. The result is a film that’s as much a remake or reboot of the original as it is a quasi-sequel.

It’s 2003 and 30 years after the “events” of the first film. Bryan Cranston plays Sam Nealon, who is the representative of the Nicholson character. Sam now owns a bar that’s not doing all that well. On a particularly slow night a man walks in and engages Sam in some small talk before he finally asks Sam if you recognizes him. It takes a minute, but he finally greets Larry “Doc” Shepherd (Carell), the young sailor he once had to escort to prison. Doc settled in the area of the prison and eventually had a family. His son followed in his footsteps and joined the service only to be killed in action. Doc asks Sam to accompany him to retrieve the third member of the original gang. They find Reverend Richard Mueller, played by Laurence Fishburne, heading a congregation of his own. He’s a long way from the whoring and cussing man they knew 30 years ago. Now Doc wants them to travel with him to pick up his son’s remains and attend the Arlington Cemetery funeral. Mueller is most reluctant to go but is shamed by his wife into making the trip.

If you’ve seen The Last Detail, you will recognize many of the beats from this point forward. Doc decides he doesn’t want a military funeral but rather wants to take his son back home for a family service and burial. So his pals help him work out the logistics, and they are back on the road. Of course, Sam wants to relive old times, and the guys experience ordeals that really are straight out of the original work. Those elements include train rides and conversations including missing a train and having a night out on the town. A bar encounter is almost a mirror shot from one in the first film, but with a somewhat disappointing outcome when your expectations have been fired by Nicholson’s version of that encounter in 1973.

Many of the story elements were changed. This time Doc was jailed for stealing morphine, and we get a suggestion that the other two guys were actually in on the heist and Doc took the fall for all of them. There is certainly a ton of guilt shared between Sam and Mueller. There are images in their conversation that they may have watched a dying man suffer because of their crime. The result is that this movie is often more serious in tone. But there are so many comedic moments. One that involves a misunderstanding at a truck rental agency leads to the film’s biggest laughs.

The best part of Last Flag Flying is the connection and chemistry of the three leads. Just like the first film, it’s the bonding moments that serve as the film’s milestones and emotional triggers. Before long I wasn’t even very much interested in the rather simple premise. These guys are a compelling trio, and I was just enjoying spending time with them. I really think I could have spent hours watching them merely interact. For many people this will translate into some pacing issues. They are there, and rather obvious at times. It will all depend on just how good a time you end up having with these characters. For me, it was time I would love to spend again.

Bryan Cranston is the front-and-center lead here. It was obvious from the film’s first few frames that he was channeling Jack Nicholson the entire way. It’s not just a voice, and there were moments he drifted dangerously close to becoming a caricature. But he avoided crossing that line, if only by a hair. It was evident in his voice, but more in the nuances of his mannerisms. The way he put on a jacket or that strut-style walking gait they all filled in the picture that connected him and the film itself to that other movie. Neither of the other two were attempting to recreate the old characters, and that’s entirely appropriate. Part of the message here is that Sam is the one who never really changed. He may no longer be as “up” or positive as he was 30 years ago, but the strength of character never really went away. It’s Doc and Mueller who have changed rather dramatically from who they were. The years in prison had to have taken away the naive young sailor who these guys first met. He’s still not very assertive, but he’s no longer blind to the realities of life. If prison didn’t get to him, the loss of his son certainly does. We see just short hints at the man Mueller used to be. He’s trying to hold on to his piousness, but it’s a struggle, and Fishburne does an absolutely amazing job of showing us the struggle between those two men inside. It’s all done through a clever and subtle performance. You will enjoy every minute spent traveling with these three former sailors. You just have to be willing to go along for the ride. “Ask yourself, are you willing?”

Gino Sassani is a member of the Southeastern Film Critic's Association (SEFCA). He is a film and television critic based in Tampa, Florida. He's also the Senior Editor here at Upcomingdiscs. Gino started reviewing films in the early 1990's as a segment of his local television show Focus. He's an award-winning recording artist for Omega Records. Gino is currently working on his 8th album Merchants & Mercenaries. Gino took over Upcomingdiscs Dec 1, 2008. He works out of a home theater he calls The Reel World. Favorite films: The Godfather, The Godfather Part II, The Body Snatcher (Val Lewton film with Karloff and Lugosi, not the pod people film), Unforgiven, Gladiator, The Lion King, Jaws, Son Of Frankenstein, The Good, The Bad And The Ugly, and Monsters, Inc.
Lady Bird The Man Who Invented Christmas