The Man Who Invented Christmas

Posted in: The Reel World by Gino Sassani on November 22nd, 2017 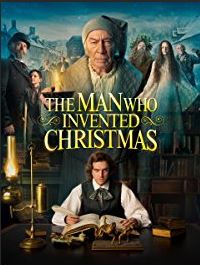 It is very likely that no story has been retold in films and television more than A Christmas Carol. It has been made as animated specials and computer-generated features. There have been comedy versions. Most television shows, if they’re around long enough, get around to spoofing at least the themes. If by now you’re wondering what the dickens I’m going on about, well… you’re correct. It’s all about classic author Charles Dickens, who literally invented many of the modern trappings of our Christmas celebrations with that one little holiday ghost story. You know the story. But do you know how it came to be? Dickens’ writing process is legend to those of us who know his work intimately. Now everyone can get the inside scoop with the charming The Man Who Invented Christmas.

Dickens (Stevens) has just come off of three relatively big flops in his last three books. He’s spending money faster than it’s coming in, and he has a young wife (Clark) and children depending upon his efforts. There’s also desperation going on for him that he’s reluctant to let anyone else see. He’s haunted by the memories of his childhood. His father (Pryce) was sent to debtor’s prison, and he was forced to work as a young lad in a blackening factory under harsh conditions and cruel people. It drives him to success, but it also holds him back with an almost paralytic fear that he is still that poor lad and he and his family are destined to the same harsh realities. But after three disappointing books, his publishers are a little reluctant to put much out for whatever comes next. They are even more put off that he intends to champion the poor and needy. So he decides to write a Christmas book and publish it himself. There are huge hurdles to conquer. He has only three months until Christmas, and the cost of publication could put him in the dire finances he’s running from. Still he sets out to make this book nothing but the best. He hires an artist of renown for the illustrations and puts out for gold leaf and the finest materials. Now all he needs is the story.

Scrooge is the first character he pieces together from some of his wonderings looking for inspiration. Once named, the character comes to life in the form of Christopher Plummer, as do other characters as he expands on his idea. Dickens finds himself dealing with a number of distractions including his parents who have come to stay for a while. Dickens still hasn’t forgiven his father for his childhood nightmares and resents the man’s needs. It seems that every time he’s starting to get on a roll with the growing population of characters he’s confronting as if they were there, something pulls him away. The pressure mounts to meet deadlines, and Dickens must eventually resolve his own regrets and fears before he can bring the story to a satisfactory conclusion.

Certainly, much of the film plays out like a fantasy as Dickens interacts and even argues with the characters he’s creating. Scrooge isn’t happy at all with the narrative, as he believes his own side of the story isn’t heard. The chemistry between Dan Stevens and Christopher Plummer is absolute magic. Stevens brings a high-spirited fire to the Dickens role and is absolutely infectious. But this isn’t as fanciful as you might think. Dickens was very attached to his creations. His characters were actually very real for him. His actual love for Little Nell from The Old Curiosity Shop haunted the man to the point of ruining his own marriage as he took up with a mistress who he called Nell. He grieved her death as if she had been real, and he had been in love with her in reality. So while these moments make for great cinema and an endearing film, there is also much more of a grain of truth to be found here. I have no doubt that he had many conversations with old Scrooge even long after the book was published. It’s this rather rare look into the man’s process that I found quite delightful.

With The Man Who Invented Christmas we are really getting two movies in one. You have the story of the author, but we also see most of the iconic moments from A Christmas Carol being played out as well. Sure, it’s in the man’s imagination, but fortunately director Bharat Nalluri takes us inside the imaginative and perhaps somewhat imbalanced brain of the artist. And thanks to Plummer’s performance, which recalls the Patrick Stewart performance, we get to relive the popular tale.

There are some bright supporting roles here. Justin Edwards plays the author’s best friend, agent, and confidant John Forster. He pretty much represents the audience as he’s dragged through this creative experience. Miles Julip plays one of Dickens’ rivals and fellow club member William Makepeace Thackeray, who takes great joy in reminding other artists of their failures and bad reviews, all the while attempting to appear supportive. Ann Murphy is a quiet but exceptional part of the story as Tara. Tara is a young charity case the family has brought into the staff. When Dickens discovers she loves to read but can only afford penny dreadfuls, he lends her classical literature. She also becomes somewhat of a muse and is the only one he reads his progress to. She ends up teaching him a lesson in humility as well as pushing him to redeem the villainous Scrooge.

Dickens was truly the first celebrity writer. He took money to do readings, which was considered rather scandalous in the writing community of the time. He did worldwide tours to perform excerpts from his books. He used his celebrity to bring the public around on issues of social justice like child labor and predatory business practices. He fought for an international copyright law including appearing before Congress here in the United States, working with the popular American writer Mark Twain. No question that Dickens was a trendsetter. Today all writers revel in readings and book-signing tours. Dickens would go on to write an annual Christmas story for years after the success of A Christmas Carol. None of those stories achieved quite the popularity and enduring legacy, however. I’m a huge Dickens fan, so I have to admit to a bit of a bias here. But I suspect this film might become a holiday tradition for me along with Karloff’s The Grinch Who Stole Christmas and the wonderful A Christmas Story. We all have our favorites, but Santa showed up a little early and dropped this little bonus gift under our trees before we even set them up. “And God bless us every one.”

Gino Sassani is a member of the Southeastern Film Critic's Association (SEFCA). He is a film and television critic based in Tampa, Florida. He's also the Senior Editor here at Upcomingdiscs. Gino started reviewing films in the early 1990's as a segment of his local television show Focus. He's an award-winning recording artist for Omega Records. Gino is currently working on his 8th album Merchants & Mercenaries. Gino took over Upcomingdiscs Dec 1, 2008. He works out of a home theater he calls The Reel World. Favorite films: The Godfather, The Godfather Part II, The Body Snatcher (Val Lewton film with Karloff and Lugosi, not the pod people film), Unforgiven, Gladiator, The Lion King, Jaws, Son Of Frankenstein, The Good, The Bad And The Ugly, and Monsters, Inc.
Last Flag Flying Coco