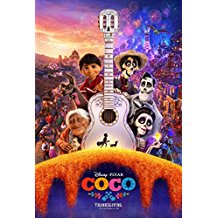 Up until recently, Pixar Animation Studios had a pretty spotless reputation. (At least when it came to the quality of their films.) But while the studio’s last three efforts (Cars 3, Finding Dory, The Good Dinosaur) have been financially successful, Disney’s own in-house animation studio (Moana, Zootopia, Big Hero 6) has been out Pixar-ing Pixar in terms of delivering creative, crowd-pleasing blockbusters for all ages. (I didn’t even mention a little movie called Frozen.) That’s why I’m pleased to report that Coco — Pixar’s moving, colorful and exhilarating take on Mexico’s Day of the Dead holiday — is a thrilling return to form.

“We’re the only family in Mexico who hates music. But me…I’m not like the rest of my family.”

Miguel Rivera (voiced by Anthony Gonzalez) is a 12-year-old boy who lives in a small Mexican village with his shoemaking family. Coco begins with Miguel excitedly relaying his family history, which includes his great-great grandfather abandoning wife Imelda (Alanna Ubach) and daughter Coco to pursue a career in music. As a result, the Rivera family vowed to completely ban music from their lives. That’s a problem for Miguel, who dreams of becoming the next Ernesto de la Cruz (Benjamin Bratt), a matinee idol who was also Mexico’s most famous singer/songwriter until he was killed in an untimely accident. Miguel goes to extreme lengths to try and perform in a talent contest during Dia de los Muertos (Day of the Dead), the Mexican holiday where dearly departed relatives come visit their living family members.

Unfortunately, Miguel winds up getting up close and personal with some skeletal relatives who have arrived for Day of the Dead festivities. The family members bring Miguel to the Land of the Dead to try and sort things out before the young boy becomes permanently stranded in the afterlife. Great-great grandmother Imelda offers her blessing to send Miguel back among the living…as long as he vows to completely give up music. Instead, Miguel teams up with a desperate, charming hustler named Hector (Gael Garcia Bernal) to find his great-great grandfather and secure his blessing so that Miguel can go back home and pursue his musical dreams.

At first glance, making a kids’ movie centered around something called “Day of the Dead” and mostly set in the afterlife might feel a bit morbid. But directors Lee Unkrich (Toy Story 3) and Adrian Molina have crafted a beautiful and touching fable about the way memories can keep family members and friends alive even after they’ve passed away. The idea is encapsulated by “Remember Me,” Ernesto de la Cruz’s most famous song and the movie’s theme. Conversely, spirits like Hector — who hasn’t received a Day of the Dead offering in a long time — are unable to cross the bridge into the land of the living during Dia de lost Muertos and risk disappearing from the afterlife for good.

The bridge — which is made of resplendent Aztec marigold — is a stunner and one of the movie’s many affecting nods to Mexican culture. With its hillside houses that appear to be stacked atop one another, the movie’s sparkling Land of the Dead looks like the city of Guanajato. The film opens with Miguel’s family history playing out on lively Mexican banners, which I got to see for myself during a recent trip to Mexico with my wife. There are also subtler, funnier touches…like the fact that Miguel’s Abuela (Renee Victor) wields a chancla as if it were a six-shooter. All these great cultural touches serve to enliven what is essentially a pretty standard Disney story: young protagonist wants to pursue a dream but is held back by disapproving parents. (There’s even a cute animal sidekick in the form of dopey stray dog Dante.)

Gonzalez’s vocal performance is an infectious delight from the very beginning. Even when Miguel becomes petulant, we’re on board with the boy pursuing his destiny. Garcia Bernal is a charming trickster, Bratt brings a surprising dimension to de la Cruz’s pompousness, and much of the supporting cast is comprised of Mexican performers. That being said, the actors somewhat take a backseat to the movie’s wonderful music. In addition to “Remember Me” — courtesy of married songwriting duo Kristen Anderson-Lopez and Robert Lopez, who also wrote the songs for Frozen — I loved “Un Poco Loco,” the breakthrough ditty Miguel performs in the afterlife.

The word “slump” might be a bit harsh in describing Pixar’s recent output. Even though the studio literally made a movie about feelings, Coco ranks among its most heartfelt and emotional films. (I may or may not have cried for 10 minutes straight during the finale.) It’s a helpful reminder to never sleep on Pixar and “never underestimate the power of music.”

The Man Who Invented Christmas Three Billboards Outside Ebbing, Missouri