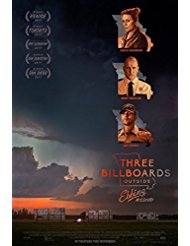 A great assembling of actors, excellent control by director Martin McDonagh and a vicious script make Three Billboards Outside Ebbing, Missouri a winner. The crime drama, laced with cynical comedy, puts the film up there with the movie Fargo and even TV’s Fargo.  While I may like the film, it does have some racist tones that may offend. That said, McDonagh has a penchant for turning the tables on the offensive comments and actions, and here he does it big time.

In the small town of Ebbing, Missouri, Mildred Hayes (Frances McDormand) has a bright idea to light a fire under Sheriff William Willoughby’s (Woody Harrelson) inability to find the murderer of her daughter Angela (Kathryn Newton). On a lonely stretch about a mile from her house, she rents three billboards that contain a sharp accusation.

The town’s people are aghast at the ploy that casts aspersions on their honorable and loved sheriff, and they act out. Just when things may cool down, the outlandish message gets picked up by the area TV news station and all hell breaks loose.  Sheriff Willoughby’s top cop, Officer Jason Dixon (Sam Rockwell) is totally off the chain with the insinuation that he and his boss are ignoring the case. Being a hotheaded vindictive person with most anyone who gives him a dirty look, his dealings with those who side with Mildred get even more incorrigible.

With the police department in a tizzy over the billboards, no suspects in the murder, and the evidence burned with the body, Sheriff Willoughby tells Mildred they can’t do much.  Upset and still shaken by the crime, Mildred decides to set up her own investigation with the help of her friend and admirer, James (Peter Dinklage).

The film gets wild and wacky early on as Mildred takes on the local police and most everyone else in the town. Director and screenwriter Martin McDonagh knows how to make a sick comedy; just check out Seven Psychopaths and In Bruges.  The killing never stops in both of those films till the last frame clicks by.  Here, however, he puts on a show much like the movie Fargo with brutal confrontations and side stories popping up that add fuel to Mildred’s investigation.

Well, you just know I’m going to bring up Frances McDormand, who won an Oscar for the movie Fargo.  Here she’s on the other side of the police desk, but still investigating.  It may not be a questioning woman with a North Dakota accent this time, but she’s even better here as she shows her temper while demanding answers.  I’m not too sure, but with the Oscar for Best Actress field wide open, this film may just get her on the short list.

Both Woody Harrelson and Sam Rockwell are perfect for their roles and are right on point developing the small-town law officers. Harrelson’s Sheriff Willoughby becomes the go-between when Mildred gets fired up over Officer Dixon’s cocky attitude and tough tactics. But he calms her down and tries to reason with her getting the upper hand.  But it doesn’t last long when Dixon faces off with her.  Much like everyone else in town, she’ll have to wait and take a number before he bends over for her demands. Rockwell tops off Dixon’s savage personality with a lot of profanity and prejudiced remarks before running into someone out for revenge.

Three Billboards Outside Ebbing, Missouri has been rated R by the MPAA for violence, language throughout, and some sexual references. There are some very violent beatings including a couple of swift kicks to the groin.

A dark sadistic comedy that softens its edge with a twist.

John Delia has been on all sides of the movie business from publicity, writing for publications and on line blogs, script writing, to film making. Writer, critic, film editor he has worked as a film critic on this second go around for 14 years. He earned his Bachelor’s degree at the college of Journalism and Communications at the University of Florida in Gainesville, Florida. John is an active member of the Southeastern Film Critics Association (SEFCA) . Favorite Films: Lord of the Rings/Hobbit trilogies, The Godfather trilogy, the Indiana Jones trilogy (I didn't like the 4th), The Avengers and for TV it's Game of Thrones. As for animation it's a tie between anything Pixar and everything Hayao Miyazaki.
Coco Holiday Gift Guide Spotlight: Time-Life