12 Days Of Christmas Giveaways: Day 1 – Thanks for the Memories: The Bob Hope Collection Deluxe Box Set by Time Life

Posted in: Contests by Gino Sassani on December 25th, 2017 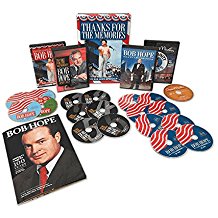 On The First Day Of Christmas Time-Life Gives To You:

Plenty of Hope for Christmas this year. Bob Hope, that is. How about 19 DVD’s just filled with Bob Hope specials? Thirty-seven hours of Bob Hope and his great friends spilled out on 39 television special broadcasts. A full-sized 32-page full-color book chronicles the life and career of the man himself. It’s Thanks For The Memories – The Bob Hope Specials. This is a monster set, and it’s just the thing to kick off our 12 Days Of Christmas Giveaways. Special thanks to our great pals at Time-Life who are going to make this holiday special at Upcomingdiscs this year.

Gino Sassani is a member of the Southeastern Film Critic's Association (SEFCA). He is a film and television critic based in Tampa, Florida. He's also the Senior Editor here at Upcomingdiscs. Gino started reviewing films in the early 1990's as a segment of his local television show Focus. He's an award-winning recording artist for Omega Records. Gino is currently working on his 8th album Merchants & Mercenaries. Gino took over Upcomingdiscs Dec 1, 2008. He works out of a home theater he calls The Reel World. Favorite films: The Godfather, The Godfather Part II, The Body Snatcher (Val Lewton film with Karloff and Lugosi, not the pod people film), Unforgiven, Gladiator, The Lion King, Jaws, Son Of Frankenstein, The Good, The Bad And The Ugly, and Monsters, Inc.
Darkest Hour 12 Days Of Christmas Giveaways