Posted in: Contests by Gino Sassani on January 3rd, 2018 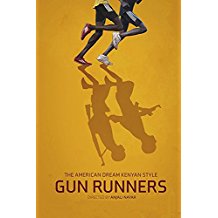 On The Tenth Day Of Christmas Film Movement Gives To You:

Gun Runners and Angry Inuk on DVD. Lucky for you we have a guy on the inside over at Film Movement. Agent MK has loaded us up on some of the best in independent film from 2017. We start things off with a bit of a Canada theme. If the thought of all of that Canadian Winter air doesn’t keep you in the Holiday mood I’m afraid there’s just no hope. Maybe this will help. We have 3 copies of both of these films. Each of three winners will get a copy of both films on DVD. Don’t thank us. It’s Agent MK at Film Movement who is playing Santa this year. Let’s just keep this between us or we might blow his cover.

Gino Sassani is a member of the Southeastern Film Critic's Association (SEFCA). He is a film and television critic based in Tampa, Florida. He's also the Senior Editor here at Upcomingdiscs. Gino started reviewing films in the early 1990's as a segment of his local television show Focus. He's an award-winning recording artist for Omega Records. Gino is currently working on his 8th album Merchants & Mercenaries. Gino took over Upcomingdiscs Dec 1, 2008. He works out of a home theater he calls The Reel World. Favorite films: The Godfather, The Godfather Part II, The Body Snatcher (Val Lewton film with Karloff and Lugosi, not the pod people film), Unforgiven, Gladiator, The Lion King, Jaws, Son Of Frankenstein, The Good, The Bad And The Ugly, and Monsters, Inc.
Kingsman: The Golden Circle (UHD Blu-ray) (4K) Time to Die (Blu-ray)