Posted in: Disc Reviews by Brent Lorentson on January 3rd, 2018 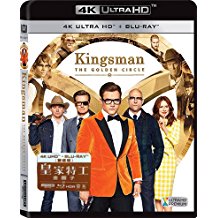 When it comes to ranking the top 10 cool movies of the past five years, Kingsman:The Secret Service would easily make the list.  From the opening sequence to the final credits, the movie was simply a fun ride with so many kick-ass moments. I mean, the fight in the church alone is worth the price of admission. The moment I heard Matthew Vaughn was returning to helm the sequel, I instantly got giddy with excitement. Heck, ever since his first film Layer Cake, the guy has managed to produce a stream of cool films that I’ve enjoyed. It’s when the trailer for the sequel first dropped that something didn’t feel right; it still looked like a fun movie, but it just didn’t suck me in like the previous film’s trailer did.  I ignored my doubts, because after all, Vaughn has proven himself again and again, so when it came time to see the screening for the film, I had forgotten about my doubts, and I was just ready to have a good time.

Now that we know how the Kingsman organization works, the film wastes no time throwing Eggsy (Taron Egerton) into the heat of action. We watch Eggsy engage in a fight/car chase as Prince’s “Let’s Go Crazy” plays in the back of a cab.  It’s a fun and flashy fight with the camera moving around in impossible angles as the fight literally does some off-the-wall stuff.  It’s great for an intro, but this is what we get hit with again and again as the film goes on, and it quickly loses its flair.

For Eggsy, though, things have gone well for him since the first film, as he is now in a serious relationship with Princess Tilde (Hanna Alstrom), whom he rescued in the first film.  While I’m fine with this romance, it just feels forced despite how cute and charming they try to make them as a couple.  It’s actually nice to see Eggsy as the guy trying to be the sweet, loyal boyfriend while he is being lured and seduced by beautiful women; it gives us something different that breaks away from what we’re used to seeing in the James Bond films for example.  Unfortunately these scenes just don’t work, and when we see Eggsy get forced into a situation where he needs to be intimate with a target, rather than focus on the character, instead the film goes for a sight gag that would normally be reserved more for a sex comedy.

Sure, there was humor throughout the first film, but this time the humor seemed to have shifted to being a sort of slapstick, Austin Powers-esque film.  I mean, the film simply goes way off the rails and becomes a parody of the original film to a point where I felt like I was in some weird fever dream watching Channing Tatum dancing like a country buffoon while high on drugs.  OK, I got ahead of myself, but my point is rather than this being a sequel that steps up its game and delivers something bigger and cooler, instead what we got resembles a film by director who seems to want to torpedo the franchise, at least tonally, because this is not the same caliber as the first film.

The head villain is Poppy (Julianne Moore), who is the head of a drug cartel but also has a fascination with the 50’s and has in turn transformed he isolated pocket of land into Poppyland, a theme park that celebrates the 50’s. I wish I could be a fly on the wall to hear how this idea was pitched. Seriously, Doctor Evil and his Big Boy space shuttle are far more impressive than this compound, and as for Moore…I just don’t get how the direction this character is taken was ever thought to be a good idea.  I’ve been a fan of Moore since Boogie Nights and everything I’ve seen of hers before and since, but I just can’t understand why she took this role.  I can’t forget the stunt casting of her kidnapping Elton John and putting him in some hideous costumes while forcing him to perform…oh, and then there are the robot dogs.

One of the bright points of the film is the introduction of the American counterparts, the Statesmen. This is a fun way to branch out the reach of the Kingsmen and set up potential spinoff films, but it just fell apart for me. But what really troubled me the most here is Colin Firth.  The first film made him a certified badass. I was already a fan of the guy, but the first film had me looking at him in a different light, as a guy who wasn’t just a charming guy for the male lead in a rom-com, but instead he was a guy who could go toe to toe with Bond or any other action hero.  Now he’s not even a shell of that character, and when he does finally have a moment to shine, it’s not until the third act, and I was ready for this movie to be done with.  Firth seems bored here, as though he doesn’t even know what is going on and is simply collecting a check and repeating lines.

Kingsman: The Golden Circle is presented in its original aspect ratio of 2.39:1. The ultra-high-definition 2160p image is arrived at by an HEVC codec with an average bitrate of 65 mbps. This ultra-high-definition image presentation is pretty solid. Colors are what really pop here. The abundance of shiny reds in Poppy Land are bright and jump out at you from the screen. The detail level is great for some of these elaborate sets and locations. The production design stands out better here than it did for me in the cinema. There’s a nice depth, again particularly at Poppy World. Black levels are excellent with plenty of nice rich shadow definition. These sharp dressers often wear black, and the blackness and fabric textures truly shine here.

The Dolby Atmos presentation defaults to a nice 7.1 track. There’s plenty of action here, and the surrounds establish their aggressive dominance from the opening chase scene. The subs add nice bottoms to everything from battles to dialog. The score is a bit louder than I’d like in some places. It does tend to step on some dialog and more subtle sounds. The action scenes deliver the goods with plenty of immersive stuff here that will bring out the best in your audio equipment.

Kingsman: Inside The Golden Circle: (1:57:13) This feature-length extra is broken into several parts with a handy play-all. Use that option and you get segments on the story, characters, production design, casting, f/x, sets and locations. There’s even a short piece on Elton John’s guest role. There’s plenty of behind-the-scenes footage and cast and crew sound bites.

Black Cab Chaos – Anatomy Of A killer Chase: (12:49) This is a nice breakdown of that early chase scene.

I just want to know what happened with this film.  I hope there is a commentary, just some voice that can explain all this to me.  As a silly slapstick action comedy, the film is OK at best, but with a runtime of 140 minutes, it is easily a half hour too long. I want to rewatch this simply out of frustration. Perhaps viewing this as the fourth Austin Powers film no one asked for would improve the viewing experience.  As the credits rolled on this, I just felt cheated, yet it’s made me appreciate the first film so much more. I absolutely love the first film, and I understand going a different direction. Unfortunately this was not the right direction at all.

Brent Lorentson is a horror writer and film critic based out of Tampa, Florida. With a BA in Digital Film, he co-wrote and co-directed Scavenger Hunt. His short stories have appeared in various horror anthologies. In 2019 his short script Fertile Blood will be a part of the anthology horror film Slumber Party. He is currently working on his first novel A Dark and Secret Place set to be released in late 2019. Favorite Films: Taxi Driver, Fight Club, I Saw the Devil, The Wild Bunch, Dawn of the Dead, A Clockwork Orange, Pulp Fiction, Heathers, The Monster Squad, and High Fidelity.
Detroit (Blu-ray) 12 Days Of Christmas Giveaways – Day 10: Gun Runners & Angry Inuk From Film Movement