Posted in: Contests by Gino Sassani on January 6th, 2018 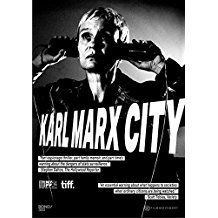 On The Thirteenth Day Of Christmas Film Movement Gives To You:

That’s right Lucky 13th Day Of Christmas. Ok it turns out our pals over at Film Movement might not know how to count. But that’s good news for you guys. it looks like we have  4-film grab bag from Film Movement. And we have 3 of these to give away. Each winner gets: The War Show ( a group of artists and activists in Syria live the nightmare of that country’s bloody civil war), The Settles(see what life is like for the Jewish settlers who live in the occupied territories of The West Bank), Be Right Back (Meet one of the most controversial artists of all time) and Karl Marx City (a filmmaker visits the what was the German Democratic Republic 25 years after the collapse seeking answers to her father’s suicide). These films represent groundbreaking foreign films and you can win all 4 with just one entry. We’re giving away 3 sets. Enter today before somebody over there finds out these DVD’s are missing.

Gino Sassani is a member of the Southeastern Film Critic's Association (SEFCA). He is a film and television critic based in Tampa, Florida. He's also the Senior Editor here at Upcomingdiscs. Gino started reviewing films in the early 1990's as a segment of his local television show Focus. He's an award-winning recording artist for Omega Records. Gino is currently working on his 8th album Merchants & Mercenaries. Gino took over Upcomingdiscs Dec 1, 2008. He works out of a home theater he calls The Reel World. Favorite films: The Godfather, The Godfather Part II, The Body Snatcher (Val Lewton film with Karloff and Lugosi, not the pod people film), Unforgiven, Gladiator, The Lion King, Jaws, Son Of Frankenstein, The Good, The Bad And The Ugly, and Monsters, Inc.
12 Days Of Christmas Giveaways – Day 12: Win The Red Skelton Hour In Color: Deluxe Edition From Time-Life Brawl In Cell Block 99 (UHD Blu-ray) (4K)