Posted in: Disc Reviews by John Delia on January 9th, 2018 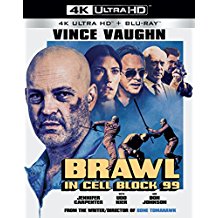 The crime drama Brawl in Cell Block 99 makes its way onto Blu-ray, DVD and 4K. The film tops the charts as one the most excruciatingly brutal movies to be released this year. If you are not offended by extreme violence and don’t get queasy from the sight of blood and cruelty, then this film may be your cup of java. That said, the crime story does have some vindication behind all the willful chaos. Getting laid off from his job at a towing company, Bradley (Vince Vaughn) cleans out his locker and heads home.  When he gets there things start getting worse when he finds out that his wife Lauren (Jennifer Carpenter) has been seeing someone. Taking it out on her car by tearing it apart with brute force starts a rage within him.  Trying to figure it all out, he tries to come to grips with the lack of income and works out a chance to bring his wife back into his life by running drugs for Gil (Marc Blucas), an old friend.

Quickly getting rich and with Lauren pregnant, he realizes it’s the bump he needed to get his life back. One night Gil introduces Bradley to Eleasar (Dion Muciacito), a crystal meth runner who will provide a large payoff to pick up his shipment. Gil asks Bradley to go along and make sure the pickup goes as planned. When the job goes bad, Bradley gets arrested and finds himself behind bars.

At the prison for months, things get even worse when Bradley gets a visit from Placid Man (Udo Kier). He tells Bradley that he must do a killing behind bars or his wife will have her unborn child deformed in her womb. Director and writer S. Craig Zahler moves his film along at a snail’s pace attempting to get every nuance of every scene as dark and brooding as possible.  In between he unleashes a massive amount of beatings, thrashings, and other cruel punishments.  It’s a tough prison, and he shows it up close and deadly.

It’s a different kind of role for Vince Vaughn, the funny man of film. In this unusual side of Vaughn we see a very menacing, brooding, and psychotic performance, characterizing Bradley to the point of scary.  This role is 180 degrees from his norm in movies where he has played persons like Jeremy Grey in the Wedding Crashers or Wes Mantooth in Anchorman.  For me he captured the essence of Bradley and makes the film work.

The film drags a lot, and there are times when you start to wonder why the production company seems to be stretching the film.  The camera lingers on close-up shots and insignificant scenes that tend to make the film unjustifiably strung out. Although I found this to be a downside, the film is still worth watching for the performances of Vince Vaughn and Jennifer Carpenter.

Brawl In Cell Block 99 is presented in its original aspect ratio of 1.85:1. The ultra-high-definition 2160p  image is arrived at by an HEVC codec with an average bitrate of 55 mbps. This is a bit of a disappointing UHD release. This is a non-HDR title so that colors are pretty much on par with the Blu-ray HD release. Of course this is a rather drab image by design, but it shows a bit of studio low regard for the film, which was originally going to see more of a theatrical release. Yes, the sharpness and black levels edge out the HD version, but only in spots. There’s a rather astonishingly sharp image to start the film with a crunched beer can on a wet road. It never quite matches that level again. Lighting is intentionally rather surreal, so it’s often difficult to figure out what is intentional and what is just carelessness on the transfer itself.

The Dolby Digital TrueHD 5.1 is exactly the same as the Blu-ray version. Again the audio presentation demonstrates a low regard by the studio for the title. Money and resources were saved to bring you a sub-par 4K audio and image. There is little to no score and this is a quiet film. So can someone please explain to me why the dialog still sounds muddy and often unclear when there is virtually nothing else in the sound mix. It’s particularly hard to understand Jennifer Carpenter when she’s speaking. It’s a good thing this has subtitles. I relied on them too often to catch the dialog.

The extras are all on both the Blu-ray and UHD copies of the film:

Journey To The Brawl: (15:10) The lack of care for the title continues in this feature. You get interview pieces that contain horrible edits. The sound and image are actually pretty terrible, as well. There is no behind-the-scenes footage, and it looks like features I’ve seen on “no-budget” films.

A film that accentuates the brutality of prison life.

John Delia has been on all sides of the movie business from publicity, writing for publications and on line blogs, script writing, to film making. Writer, critic, film editor he has worked as a film critic on this second go around for 14 years. He earned his Bachelor’s degree at the college of Journalism and Communications at the University of Florida in Gainesville, Florida. John is an active member of the Southeastern Film Critics Association (SEFCA) . Favorite Films: Lord of the Rings/Hobbit trilogies, The Godfather trilogy, the Indiana Jones trilogy (I didn't like the 4th), The Avengers and for TV it's Game of Thrones. As for animation it's a tie between anything Pixar and everything Hayao Miyazaki.
12 Days Of Christmas Giveaways – Day 13: Win A 4-Pack From Film Movement Battle of the Sexes (Blu-ray)