Posted in: Disc Reviews by Jeremy Butler on January 15th, 2018 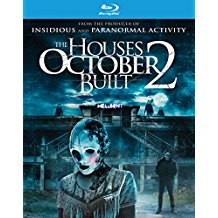 Most people that survive a near traumatic experience don’t go back for seconds. Most people that is. For the group in The House October Built 2, I guess they were adhering to the logic that lightning doesn’t strike the same way twice. Or does it? Embarking on what I can only describe as a horror tour, five friends attempt to capitalize on potential fame and fortune by documenting their experience traveling city to city to explore various haunted houses or hay rides. They even managed to convince the most traumatized member of their group to join them, reopening old wounds and provoking things that best left in the past. I wish that was the worst they had to contend with, as evidence that what they faced a year earlier begins to resurface to finish what it started.

So the concept of the film is top-shelf, execution is another matter in entirely. For one, the set-up is entirely too long. The basic idea was apparent early on, this group looking to capitalize on their famed abduction a year earlier resumes the same activities that nearly cost them their lives. I even enjoyed the addition of a holdout, the girl that refused to take part in this after being buried alive in a coffin. I mean, who would want to relieve that trauma. However, once you have the girl on board, I would say that you only need to visit a handful of places to establish tempo before moving to the center stage for the plot. I think a part of it was the fact that the group went to around three venues before they realized that they need the girl. In my opinion, they should have found themselves turned away at the first venue in order to necessitate the need for their holdout and those other two venues could have been focused more on convincing her to jump back into the mix, possibly a flashback to the year prior.

Overall the story is entertaining and the cast does a good job in their roles to establish this bond between the group. Even the tension that exists between the group is realistic and relatable, specifically during the all but predictable twist. Not to give too much away, but I can honestly say that I saw that twist coming from the story’s midpoint. Let’s see if you do too. Regardless, the story kept me entertaining, even if it didn’t succeed in scary me. I mean at all. Truthfully, I think I would categorize this as more of a suspense thriller than an outright horror film.

The House October Built 2 is presented in an aspect ratio of 1:85:1. The 1080p image is arrived at with an AVC MPEG-4 codec at an average of 22 mbps. There are two filming styles evident in this movie: Point-of-view technique, as known as POV, and the traditional filmmaking. I was thoroughly impressed with the detail of the traditional style. The clarity was of such a quality that spots and stains on laptop screens and car windshield were easily discernible. In regards to the POV technique, the discoloration on faces during video chat and pixilation during the pov-style was prominent during these periods. However, it is my estimation that was intentional to add an air of authenticity to the, which it truly does.

The DTS-HD Master Audio 5.1 track works fine during dialogue sequences, but I had hope for a bit more of the immersive feeling given that this is supposed to be a horror film. As it stands, a majority of the sound generates from the front speakers and there is little to no ambient noise during exterior scenes that would have gone a long way towards building tension. Just a few little things, like the sound of crickets or owls would have gone a long way towards building an immersive experience. An immersive experience is key when you are trying to build tension in order to scare your audience.

Deleted Scene (07:21): Four scenes that didn’t make the final cut. Worth a look.

Uncut Projection Scene (04:54): A large edit of the projection scene. I’m a sucker for uncut footage so obvious I’m going to recommend taking a gander.

“Halloween Spooks” Music Video (04:02): Not my brand of music, but it does have some behind-the scenes footage included.

Portrait of a Scare (06:43): A slide show featuring the blood and gore depicted throughout the film as well as some behind-the scenes shots. Interesting, but runs for way too long.

If you are seeking a truly frightening experience and you are a horror film veteran, I don’t expect you are going to find it in The House October Built 2. That aside, it is an entertaining tale and there is a bit of suspense built in. Also, think of it as an opportunity to test you skills and see if you can predict the twist faster than I did. If you haven’t figured it out by the time they of the marathon run, you lost.

Jeremy Butler is a film school graduate of the International Academy of Design and Technology. He is been writing for Upcomingdiscs since 2012; however, movies have played a big part of his life for much longer. Favorite genres include horror, science fiction/fantasy, and comedy. Favorite movies are V for Vendetta, Boondocks Saints, Kiss Kiss Bang Bang, and The Godfather.
The Commuter It (2017) (UHD Blu-ray) (4K)