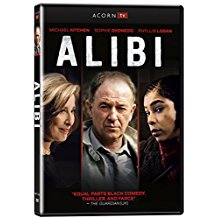 Alibi gives you quite a bit of storytelling, which is surprising given that it is only comprised of three hour-length episodes. I will give it to British shows that have somehow found the key to making that work, because that would not work in the U.S. It would feel rushed, and a lot of key nutrients would have to be removed due to time constraints. Alibi manages to have multiple twists and turns in that time span as well as tell a very entertaining and engrossing story with the assistance of its two established leads, Sophie Okonedo and Michael Kitchen. Alibi tells the story of what happens when two people attempt to cover up an accidental death, when one person is a complete neurotic and the other is calculating to the point that you might find yourself question if this is her first “accidental” death.

No good deed and all that, or least that’s the case for Marcey Burgess (Sophie Okonedo), a civil servant and part-time caterer who finds herself ingrained in a murder investigation when all she was trying to do is retrieve her purse. However, I will say that she was presented with an opportunity to walk away and she didn’t take it, so I guess that technically means that she reaped what she sowed. While catering the 19th anniversary for a married couple Greg and Linda (Michael Kitchen and Phyllis Logan), Marcey notices inappropriate contact between the wife and the husband’s business partner, but keeps it to herself and leaves with her group. However, after realizing that she left her purse behind, she returns to the house to find the husband standing over the business partner’s lifeless body. Marcey attempts to flee the scene but ultimately ends up locked in a back room with the husband on the other side.

Upon learning that he was unaware of the affair and him explaining that the victim’s death was accidental, realizing how bad his situation already looks, he lets Marcey leave the house without harm and prepares to contact the police. That is until Marcey returns and suggests that they cover up the crime in order for him to avoid the guaranteed suspicion that he would be under by the police. The two devise a foolproof plan (no such thing, obviously) to explain the death. Their thought-out plan quickly begins to unravel as new information begins to place Marcey in the vicinity of the house during the hours before the death.

Needless to say, this entire thing could have possibly been avoided if the two leads had just told the truth. Honesty is the best policy. That said, it was entertaining to watch these two attempt to overcome the odds in order to fool not only the police but Greg’s wife who becomes suspicious following how neurotic her husband becomes. In regards to genre, the miniseries is hard to peg, as there are elements of black comedy and thriller themes. For sake of argument, I’m going to classify it as a thriller, as there were bits that had me on the edge of my seat, primarily in the second and third parts. The first part was the stage-setter, more so for Greg than Marcey. I feel like although a majority of opening episode was told from Marcey’s perspective, I learned more about Greg than I did about her. For the most part all I discovered about her is that she can keep a secret and is more than willing to get involved in a situation that most people would walk away from.  We get a better understanding of her in the following parts, but the more and more she inserts herself into the couple’s lives, the more I find myself asking why didn’t she just run screaming from the house when she had the chance.

There are a bit of twists and turns in the series with the affair, embezzlement, and of course the police investigation.  I was thoroughly engrossed from beginning to end, as with every passing second it seemed like the pair was just inches away from ending up in the nick. Also, I found myself rooting for Marcey and Greg, as they appear to be the only innocent victims; the wife is not a nice person.

If you are a fan of thrillers, I recommend Alibi. I guarantee that you will be entertained the entire time and eager to see what happens next. I’m not promising that that you will be completely surprised with certain aspects, but at the very least you will enjoy the way the situation unfolds.

Jeremy Butler is a film school graduate of the International Academy of Design and Technology. He is been writing for Upcomingdiscs since 2012; however, movies have played a big part of his life for much longer. Favorite genres include horror, science fiction/fantasy, and comedy. Favorite movies are V for Vendetta, Boondocks Saints, Kiss Kiss Bang Bang, and The Godfather.
The Lego Ninjago Movie (UHD Blu-ray) (4K) The Commander: Complete Series