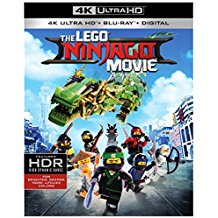 Even though I loved the first two Lego movies, I was completely unfamiliar with the toy company’s Ninjago line before I sat down to watch this latest entry in the madcap cartoon franchise. (I wasn’t even sure how to pronounce “Ninjago”…and the answer isn’t as simple as it seems.) But my unfamiliarity with the source material isn’t the reason why I feel The Lego Ninjago movie is the weakest entry in the series so far.

“The story of Ninjago is the story of a boy. His name is Lloyd, and his dad is the worst guy in the history of the world.”

Lloyd (voiced by Dave Franco) is a teenager who is constantly picked on at school and everywhere else he goes in his home city of Ninjago. To be fair, the citizens of Ninjago have a decent excuse for hating hard on Lloyd: his father is Garmadon (Justin Theroux), a warlord who constantly wreaks all manner of havoc in his efforts to take over the city. (That includes, but is certainly not limited to, popping kids’ balloons.) Garmadon lives in a volcanic lair within sight of the city, which means he’s been an absentee father to Lloyd. In a typical act of teenage rebellion, Lloyd has taken on a secret identity to repeatedly thwart his evil father alongside a secret ninja force trained by Master Wu (Jackie Chan).

Lloyd’s Green Ninja is joined by Kai the Fire Ninja (Michael Pena) and his sister Nya the Water Ninja (Abbi Jacobson). There’s also Cole the Earth Ninja (Fred Armisen), Jay the Lightning Ninja (Kumail Nanjiani), and the robotic Zane the Ice Ninja (Zach Woods). When an unworthy Lloyd impulsively unleashes a destructive Ultimate Weapon to try to defeat Garmadon once and for all, the team finds itself scattered and in crisis. Eventually, the ninjas must team up with their greatest enemy to take out a bigger, deadlier (and cuddlier) threat.

“He might look different, but he can do great things. You just have to look at it from a different point of view.”

If you’ve seen The Lego Movie and The Lego Batman Movie, then the story beats here will feel extremely familiar…and that’s precisely my biggest disappointment with Ninjago. You’ll recognize LaLloyd’s strained relationship with his absentee father from a similar thread in Batman. And just as in The Lego Movie, the Ultimate Weapon turns out to be…something mundane from the live-action world. Speaking of live-action, Ninjago incorporates more live-action elements than its two predecessors put together. (That includes a charming prologue that puts Chan on screen.)

However, I’m most disappointed because I feel Lego Ninjago represented an opportunity to celebrate (and lampoon) kung fu movies the same way Batman represented (and poked fun at) every iteration of the Caped Crusader. Instead, Lego Ninjago largely takes place in and around the titular city, which largely resembles a modern metropolis (with some old world temple touches thrown in).

Fortunately, the movie also often resembles the fast and irreverent Lego cartoon comedies that came before it. In addition to the cool-kid comedy cast voicing the ninjas — even so, Theroux’s brash bad guy work gets a healthy dose of the laughs — there are amusing gags involving a Fuschia Ninja, an absurd amount of Wilhelm Screams, and the fact that Chan’s Master Wu has to impart an important life lesson before making his exit. And just like any proper Jackie Chan movie, this one features some bloopers featuring the action legend in the middle of the credits.

There are some decent laughs to be had in The Lego Ninjago Movie, but what previously came off as fast and furiously funny feels familiar and formulaic here.

The LEGO Ninjago Movie is presented in an aspect ratio of 2.40:1. The ultra-high-definition  image is arrived at by an HEVC codec with an average bit-rate of 55 mbps. As is typically the case with these Lego movies, there’s a lot going on here from a visual standpoint. The only grain on screen happens at the very beginning, courtesy of the ’70s style Warner Bros. logo. (A nice nod to classic kung fu flicks.) Otherwise, this is a blemish-free, vibrant presentation from start to finish. (This movie’s lush greens are particularly impressive.) The brief live-action opening features clean, warm tones. Once the animation kicks off, there are multiple moments where it seems as if you can reach into your screen, grab one of the Lego figures, and play with them. While this doesn’t offer the insane visual versatility of The Lego Movie, Ninjago is a showstopper in its own right. The UHD presentation stands out mostly with somewhat better black levels and sweet contrast. The black levels offer a nice texture, particularly on the villain.

The Dolby Atmos defaults to an active 7.1 track. Be careful, however. For some reason the film will open with the DTS HD MA 5.1 track instead. Make sure you make the change in the menu setup screen. Not surprisingly, the mix is as maniacally aggressive as the film itself. That works fantastically during any of Garmadon’s many assaults on Ninjago, which offer pinpoint and dynamic directionality across all channels. On the other hand, when the entire room shakes at not-always-appropriate times — including an accident inside a quaint shop early on — it comes off a little obnoxious. Still, this powerful track fires on all cylinders from a technical standpoint. The upgrade over the Blu-ray comes with richer subs that give the presentation nicer depth.

There is an Audio Commentary with director Charlie Bean, who is joined by the film’s animation director, production supervisor, various editors, and many (MANY) more in both Los Angeles and Australia. The conversation is pleasant, but a bit dry since the track focuses more on technical aspects of the production — which are staggering — and only makes offhand references to the various iterations of the story.

Featurettes: (18:19) There are three mini-docs here. Team Supreme: Building Ninjago covers the conception of Ninjago 9 years ago and briefly outlines each of the three directors’ responsibilities; Rumble in the Bricks has some cool footage of Jackie Chan’s stunt team performing fight sequences for the sake of the film’s animators; and Rebrick Contest Winners is a Lego movie tradition by now, showcasing some of the best stop-motion submissions. (The winning films earned a cameo in the Ninjago Movie.) Features a play-all option.

Mini Movies: (9:47) A trio of quickie flicks. Shark E. Shark in Which Way to the Ocean is a cute, dialogue-free, 2D offering; Zane’s Stand Up Promo is an amusing DEF Comedy Jam parody; and The Master: A Lego Ninjago Short focuses on Master Wu and lampoons kung fu movie tropes in a more prominent way than the feature film. Features a Play All option.

Music Videos: (6:58) There are four music videos. “Found My Place” by Oh, Hush and Jeff Lewis features clips from the film and lyrics that cheekily reference key Ninjago characters, “Everybody Have a Ninja Day” appears to be an alternate opening to the animated portion of the film, Warlord Ballad shows the softer side of Garmadon, and Rocktagon is another poppy, propulsive soundtrack to the characters kicking butt. Features a play-all option.

Deleted Scenes: (7:40) There are three scenes total. Includes storyboards, animation tests, and director’s commentary. The most intriguing bit involves a scene from when the script required that Lloyd travel back in time(!) to try and connect with Garmadon. Features a play-all option.

Gimme Some Outtakes!: (4:42) Some amusing scripted flubs here, including the obligatory cell phone going off in the middle of a scene.

Promotional Material: (20:28) Another series of 10 featurettes. The Lego Ninjago Movie: Behind the Bricks is mini-doc hosted by Lloyd, Garmadon, and the other characters; Please Silence Your Cell Phones has a vain Garmadon blowing up Lloyd’s cell phone prior to a movie; Please Put on Your 3D Glasses has Garmadon imploring viewers to (you guessed it) put on their 3D glasses; Lego Sets in Action are dialog-free, animated showcases for the various large sets and elaborate Lego vehicles; The Lego Ninjago Movie: Ninja Formation highlights Jackie Chan’s stunt team and features comparisons to the movie’s animated action. Find Your Inner Ninja with Jackie Chan has the action star extolling the virtues of strong hands, focus, and listening; Ninja Jokes with Jackie Chan has the actor enthusiastically delivering corny punchlines; Kicks & Bricks: Making the Lego Ninjago Movie features the talented and funny live-action cast talking about their characters. The Lego Ninjago Movie: Back to School has Nya offering helpful tips to returning students; and Me and My Minifig has each of the actors goofing around with their tiny Lego counterpart.

It was always going to be an upward climb for The Lego Ninjago Movie in terms of connecting with audiences on a grand scale. This third installment could never recreate the anarchic surprise success of The Lego Movie, and the Ninjago line doesn’t have a fraction of the name recognition that Batman does.

Those factors — along with an uninspired, scattershot script — combined to make this film a critical and box office disappointment. (Judging by all the promotional materials and bonus features on this disc, it wasn’t for a lack of trying from the marketing department.) Still, if you pick this one up, you’ll get some solid jokes for the grownups and fun ninja-themed action the kids will enjoy.