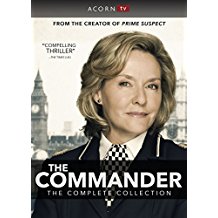 Lynda La Plante is quite a fixture in the British television landscape. She has been a television writer since the 1970’s and has been producing her own creations since the 1990’s. Her shows often feature a woman in some kind of authority position fighting the good fight in a law enforcement tradition that leans heavily in the male department. Likely American audiences know her best from her more recent Prime Suspect series which has enjoyed some success here in the States. It wasn’t long before that show that she was writing and producing a series of television movies with the overall title of The Commander. The films ran from 2003 until about 2008 when the final film was released as a three-part show. Acorn has put together a 7 disc DVD collection of the show’s entire run.

The only common thread in the series is the character of Commander Clare Blake played by British television icon Amanda Burton. The first film follows her promotion to the prestigious Murder Squad but she’s met with immediate complications that have more to do with her own failures than working in a “man’s world”. A killer that she arrested many years ago has been released from prison. He claims he has been rehabilitated and has written a book about that experience. The profits will go to a victim’s charity he has set up and he’s asked Blake to write the book’s forward. Unfortunately, she does much more than that. The two become romantically involved while he has become the suspect in a string of recent killings that could mean he has graduated from murderer to serial killer. The bad press and series of events cast a huge cloud over the newly minted commander and her work. And it’s with that cloud that the series moves forward.

The first 4 films make up a sort of phase 1 of the series. Each film has 2 parts that run about 90 minutes each. They can be selected as individual parts or played as a whole. There is also a returning group of supporting characters that remain in the show. The most formidable of these is DCI Mike Hedges played by Matthew Marsh. Hedges is a bit of a Vic Mackay look-alike and personality. He doesn’t mind bending the rules and he’s in the middle of an internal investigation involving a shooting his squad was involved in which an “innocent” man was shot and killed. Hedges was there but he and his team have covered it up and tampered with surveillance video. Blake is on his tail and the two work to bring each other down. That is until a special investigator is sent to look at both and they have to work together to keep their respective positions. Marsh is a wonderfully strong presence on the show and demands complete attention every moment he’s on the screen. The first films also include Poppy Miller as Carol Browning. The detective starts on Hedges team but ends up selling him out to Blake but eventually she loses faith in her, as well. It’s a completely throw away character that is surprisingly badly written and each episode shows that the writers just didn’t know what the heck to do with her. Her confidant is the elderly George Hart who is played by two different actors in the series.

The next three films make up a kind of phase 2 where none of the original characters return. These appear to be stand-alone stories which do not take much of what happened before into account. They are shorter by half. While the final phase is made up of 1 film with three 45 minute parts. Unfortunately, the series never manages to maintain the quality of the first phase of films and falls pretty flat before it limps across the finish line.

Amanda Burton works well in the role. There’s a strength of character that she provides that isn’t always supported by the writing or circumstances. I’ve seen examples of La Plante’s work before and while there are brilliant moments in this series she doesn’t serve her strong female character as well as I would have expected. Her situation completely takes away from the solid performance. No commander could get away with what Blake does and come out a leader. She also isn’t a very honest character willing to cover-up her actions to the point that she’s teaming with the corrupt cop she once wanted to bring down. There goes any power the character might have had and the likely reason this show never quite lived up to some of La Plante’s other efforts. In the end Blake isn’t really likable and the removal of the supporting cast after a few films removed much of the remaining interest I had in the show.

There has been talk of a revival but I honestly don’t see that happening. I think the story is played out for all that it can be and both star and writer have moved on to better things. The disc contains a few interviews and short behind the scenes material. There’s a bit much on each disc so the video quality suffers a bit. In fact, it’s funny that the clips in the bonus materials look better than the show itself. “So I’d say this is it now.”

Gino Sassani is a member of the Southeastern Film Critic's Association (SEFCA). He is a film and television critic based in Tampa, Florida. He's also the Senior Editor here at Upcomingdiscs. Gino started reviewing films in the early 1990's as a segment of his local television show Focus. He's an award-winning recording artist for Omega Records. Gino is currently working on his 8th album Merchants & Mercenaries. Gino took over Upcomingdiscs Dec 1, 2008. He works out of a home theater he calls The Reel World. Favorite films: The Godfather, The Godfather Part II, The Body Snatcher (Val Lewton film with Karloff and Lugosi, not the pod people film), Unforgiven, Gladiator, The Lion King, Jaws, Son Of Frankenstein, The Good, The Bad And The Ugly, and Monsters, Inc.
Alibi My King