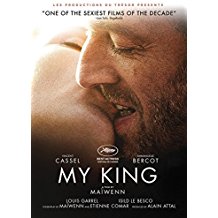 During the second half of My King/Mon Roi — which examines the up-and-down nature of love by chronicling a 10-year relationship between two French lovebirds — a wife states that her husband’s constant emotional abuse has caused her more pain than any single punch ever could. Psychological abuse isn’t nearly as cinematic as its physical counterpart, so it’s a jarring, too-real-for-TV moment to witness on screen. My King has a handful of those gut-punch scenes. And since the movie intentionally mimics the rollercoaster relationship at its center, My King is also occasionally romantic, funny, frustrating and flat-out sexy.

“The knee signifies the capacity to let go, give way, or even retreat…”

We meet Tony (Emmanuelle Bercot) when she is presumably at her lowest point: after suffering a serious knee injury while skiing, Tony must recover at a seaside rehabilitation center. However, we soon find out the physical pain from her knee injury pales in comparison to Tony’s emotional scars. The film flashes back to show us the beginning of Tony’s relationship with Georgio (Vincent Cassel), an impossibly charming and charismatic restaurant owner.

Tony, on the other hand, considers herself to be rather plain-looking, which is reinforced by the fact that Georgio doesn’t quite remember Tony when she starts flirting with him at the club where she used to work. The pair begin a whirlwind romance despite the obvious objections from Tony’s brother Solal (Louis Garrel). As Tony and Georgio progress through their relationship — they move in together, get pregnant, and get married — we start to see the not-so impossibly charming and charismatic qualities that Georgio possesses, which leads to some financial hardship and some drama involving Georgio’s clingy ex Agnes (Chrystele Saint Louis Augustin).

“Sometimes we can’t get back on our feet.”

Director Maiwenn also co-wrote the script with Etienne Comar, and she has made an uncommonly thoughtful and realistic relationship drama from the perspective of a fellow female. But the main reason My King is so striking is because it gives equal weight to both the good and bad parts of a long-term relationship. Most movie romances either gloss over unglamorous stuff like Georgio’s crushing monetary debt or Tony’s body image issues, or they spend so much time trying to establish an opposites-attract dynamic that you wonder if the two main characters even like (much less love) each other. It’s no surprise you’d have to go well outside Hollywood and cross the Atlantic to find a relationship drama that keeps it really real.

Tony and Georgio’s relationship plays out via flashbacks that feel intentionally timeless; the actors largely look the same, and the main reason you can tell a decade has gone by is because the young boy they had together keeps growing up. Thankfully, Bercot and Cassel give terrific performances that anchor these flashbacks, which might have otherwise felt disjoined and disorienting. Tony is a successful lawyer, and Bercot excels at playing the duality of a character who can be totally confident and capable one moment before turning into an insecure puddle. Even as it becomes increasingly clear that Georgio is a toxic presence in her life, Bercot is empathetic and prevents Tony from seeming like a fool.

It helps that Cassel, who has been dubbed France’s answer to Brad Pitt, is at his movie star peak here. The actor projects an effortless cool as Georgio that makes you completely understand why Tony would repeatedly get sucked in. Unfortunately, that means it takes much too long before it dawns on Tony (and the audience) that Georgio is only interested in participating in the good parts of their relationship. Among the supporting cast, the only other standout is Garrel, who is a consistent source of salty amusement as Tony’s brother.

Otherwise, the roster of supporting players in My King is a missed opportunity. I get that the movie chronicles Tony and Georgio’s relationship, but Maiwenn squanders a chance to make the sequences of Tony going through her rehab meaningful. In the end, the rehab scenes feel inconsequential — Tony befriends a group of people recovering from a variety of injuries, and they could’ve been a solid source of gallows humor — and the entire idea of having Tony flashing back to her relationship while recovering from this ailment feels flimsy at best. As a result, the movie’s momentum is halted every time the story jumps forward to Tony’s rehab.

Then again, any movie that depicts the ups and downs of a passionate relationship is bound to be uneven. That shouldn’t stop you from giving this one a look, especially if you’re looking for a reprieve or antidote to the typical Hollywood romance.

The Commander: Complete Series No Solicitors