Posted in: No Huddle by Brent Lorentson on January 25th, 2018 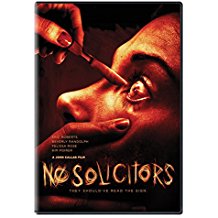 With a solid title and appealing DVD cover, No Solicitors is a film that looks to attract horror fans looking to make an impulse buy or a late-night viewing when in the mood for something to get the heart racing.  Unfortunately, the film doesn’t hold up to its potential, and to be honest this might be one of the more disappointing titles I’ve had the privilege to review.  The film has a strong premise, one that not only teases plenty of horror, but the potential for what could result in numerous sequels if the film was successful and the creative parties involved were inclined to go that direction. Instead the film seemed to aim more towards laughs than scares, and the result is at times a painful experience to watch, and not for the graphic gore that is sprinkled throughout.

If you’re like me, you’re not a fan of unexpected houseguests, and even worse being interrupted by solicitors who are trying to sell you something or convince you to check out their church.  The notion of a horror film about a family that takes pleasure in preying upon these door-to-door salesmen (and women) seems like it would be entertaining.  Getting a little deeper into the family’s motives, they keep the solicitors locked away and restrained to hospital gurneys after removing an arm and a leg to help prevent any chance of escape.  You can’t just simply toss away a good and arm and a leg, so not to waste any good meat, the family has the body parts cooked up for dinner.  Yes, this is a family of cannibals who also use their victims to harvest organs for the black market. All this solid horror material and still this film manages to not just disappoint, but simply struggled to hold my interest.

Lewis Cutterman (Eric Roberts) is an award-winning brain surgeon who is the head of his cannibal family, with his loving wife and two kids, While Roberts seems to carry all the scenes that he is in, it’s the over-the-top cheerful performances by the rest of the Cutterman clan that got under my skin.  In concept I can see how the idea of a wholesome family with 50’s era values who turn out to be cannibals can be an attractive take with the story, but unfortunately it just didn’t work for me.  It’s simply impossible to believe this family could get away with this.

To simply defend the film by saying it’s an independent horror film so I shouldn’t be so hard on it, I feel would be unfair to the many other low-budget horror films out there that have smaller budgets and no stars in front of the camera but deliver a superior product. Had this film taken a serious approach, perhaps the outcome could have been different. Horror and comedy don’t always mix well, and often times the result is a dud.  For the few successes out there that manage to pull off the genre blending, there are numerous failures.  What may have been funny on paper just simply didn’t translate here.

What does work are the scenes of gore. The effects overall are rather well done, and I can appreciate a film that sticks with using practical effects. There are a few times where some of the effects might go a bit far for some viewers, while also some bits are obviously bad prosthetics (a certain finger scene comes to mind).  But for those gore hounds out there who appreciate their gore over story, well, this film may work better for you. As for me, I’ll simply skip this title and move on to the next.

Brent Lorentson is a horror writer and film critic based out of Tampa, Florida. With a BA in Digital Film, he co-wrote and co-directed Scavenger Hunt. His short stories have appeared in various horror anthologies. In 2019 his short script Fertile Blood will be a part of the anthology horror film Slumber Party. He is currently working on his first novel A Dark and Secret Place set to be released in late 2019. Favorite Films: Taxi Driver, Fight Club, I Saw the Devil, The Wild Bunch, Dawn of the Dead, A Clockwork Orange, Pulp Fiction, Heathers, The Monster Squad, and High Fidelity.
My King Jigsaw (Blu-ray)