Posted in: Disc Reviews by Gino Sassani on January 25th, 2018 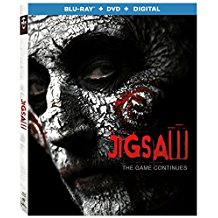 “The games have begun again, and they will not stop until the sins against the innocent are atoned for.”
It has been about seven years since last we heard Tobin Bell ask if we wanted to play a game. From 2004 until 2010 we were treated to seven films in quick succession, with The Final Chapter apparently bringing the popular franchise to an end. But most of us were pretty sure that the end wasn’t quite so near. The films brought in billions of dollars and even inspired a new escape room industry around the globe where people could work out puzzles and attempt to beat a ticking clock to get out of a themed room. Of course, no blood gets spilled, but folks pay for the experience, and a lot of that goes back to the Saw film franchise. With all of that money, Lionsgate simply couldn’t let the franchise rest for long. But after moving so quickly from film to film, it was a good idea to allow it time to breathe and the producers a chance to recharge the old batteries. Break’s over. The franchise gets a bit of a reboot without completely rebooting at all. The result is Jigsaw, and I suspect this is more of a beginning than merely Saw 8.

Jigsaw is the first film in the series to begin with something other than victims awakening to the newest trap. Police are chasing a suspect with a detonator in his hands. He’s pleading to talk to a Detective Halloran (Rennie). As the cops descend upon the manic suspect, he warns that the game is about to start. It’s what fans are waiting for, and we cut to five people with buckets bolted to their heads attached to chains. A wall of the obligatory saws awaits their hapless forward plunge, and a familiar voice explains their predicament. From this point there are pretty much two stories playing out for the remainder of the film.

The most familiar element finds these five victims being whittled down one by one as they advance through a series of rooms with new traps. They are constantly being admonished to confess, and like many of Jigsaw’s many victims they are far from innocent or random.

Where this film varies a bit from the series is that much of the film plays out outside of the game where a different kind of game is played out, more like your standard police crime drama. All of these players have their own secrets, and any one of them could be part of the Jigsaw puzzle. Detective Hallorin has plenty of skeletons as a corrupt cop with a connection to each of the bodies that end up from the game. Medical examiner Dr. Logan Nelson (Passmore) is dealing with an obvious trauma. His assistant, Eleanor (Anderson) is a bit of a Jigsaw fan/fetishist. Then there’s Detective Hunt (Bennett) who has his own reasons for being on the case. The real fun of the film is trying to figure who, if anyone, is behind the new games and how John Kramer (Bell) could be back to his old tricks from a 10-year grave. The group of victims is headlined by Laura Vandervoort, who has a bit of a unique look in this film. She’s the biggest name here and is kind of the lead victim in the game.

The production design is faithful to the franchise while still being something of a fresh look and feel. It’s a model for future attempts to revive a franchise where you can spruce things up without alienating the fans who gave the franchise its footing to begin with. Many of the trap devices from the first films make little cameos, as does the famous “Billy” doll on a trike. It’s a smart cast that keeps you guessing without sacrificing much of the unpredictable predictability of the franchise.

Jigsaw is presented in its original aspect ratio of 2.40:1. The 1080p image is arrived at with an AVC MPEG-4 codec at an average 35 mbps. The high-definition image presentation does away with the heavy greens and cold color temps of the series and delivers much more natural light and color. There’s clever use of contrast here that I suspect might look quite stunning in 4K. Unfortunately, Lionsgate only offered the Blu-ray. Black levels are a bit above average and provide good shadow definition and detail in the dark.

The Dolby Atmos defaults to a natural 7.1. The audio presentation is faithful to the incredible atmosphere of the franchise. It’s those sharp surrounds that add to the creepy settings and circumstances of the traps. The outside world is pretty much standard stuff, but it’s the subtle use of surrounds in these tight and frightening spaces that is the immersive stuff you’re looking for. Subs are not overpowering and don’t provide quite the bang for your buck I was hoping for. Dialog comes through quite well, as does the plethora of sharp objects that are staples of the franchise.

There is an Audio Commentary with producers Mark Burg, Oren Koules and Peter Block. They act as a kind of bridge between this film and the rest of the franchise.

I Speak For The Dead – Legacy Of Jigsaw Documentary: (1:21:56) This feature-length bonus feature can be played all as one or in seven parts. This thing takes you behind the scenes and covers such areas as the cast, production design, sound design, score, and a sweet inside look at all of the traps. Cast and crew all offer their thoughts with a lot of time dedicated to Tobin Bell.

The Choice Is Yours – Exploring The Props: (6:24) A visit to the prop room gives us a look at many of the key props from the film.

The film is smart. That’s really what has kept this franchise a step ahead of the typical “slasher” franchises. There’s a lot of guesswork and puzzle stuff here that keeps your attention. There’s plenty of gore, but it never really goes over the top here. It’s that nice balance and story that has breathed new life into a somewhat old idea. After all of those films, it feels like “The game, it’s just starting”.

Gino Sassani is a member of the Southeastern Film Critic's Association (SEFCA). He is a film and television critic based in Tampa, Florida. He's also the Senior Editor here at Upcomingdiscs. Gino started reviewing films in the early 1990's as a segment of his local television show Focus. He's an award-winning recording artist for Omega Records. Gino is currently working on his 8th album Merchants & Mercenaries. Gino took over Upcomingdiscs Dec 1, 2008. He works out of a home theater he calls The Reel World. Favorite films: The Godfather, The Godfather Part II, The Body Snatcher (Val Lewton film with Karloff and Lugosi, not the pod people film), Unforgiven, Gladiator, The Lion King, Jaws, Son Of Frankenstein, The Good, The Bad And The Ugly, and Monsters, Inc.
No Solicitors Maze Runner The Death Cure