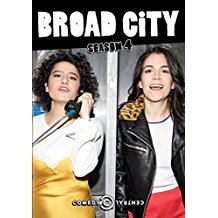 Stop me if you’ve heard this one before: single gal pals looking for love — among other things — in the big city. On television, the trope dates back to the days of Laverne & Shirley and continues with more contemporary entries like Sex and the City and Girls. The queens kweens of Comedy Central’s Broad City have given that timeless story hook a funny, druggy and tremendously weird spin for the past four seasons. That includes this most recent batch of episodes, which is lighter on comedy than usual as it explores the origin of NYC besties Abbi and Ilana’s relationship…and the way even the closest friends can inevitably drift apart.

Broad City chronicles the (mis)adventures of Abbi and Ilana (co-creators Abbi Jacobson and Ilana Glazer), a pair of uncommonly attached best friends living and playing in New York City. Season 4 begins with a long-overdue flashback episode (“Sliding Doors”) that reveals how Abbi and Ilana met…along with a darker, alternative outcome for their friendship. (Abbi is saddled with the most unfortunate wig I’ve seen in a very long time.) The rest of the season still contains the bizarre flights of fancy that have become the show’s signature. The most polarizing example is the half-animated Ep. 4/“Mushrooms,” which will feel like an especially bad trip if you’re not on Abbi and Ilana’s wavelength.

But just like season 3 highlighted Ilana’s gradual heartbreak over her split from sex buddy-turned-boyfriend Lincoln (Hannibal Buress), these new episodes carry a definite undercurrent of melancholy. On the surface, things are going great: Abbi has ditched her demeaning gym job at Soulstice — although she briefly returns to train dream client Shania Twain in Ep. 2/“Twaining Day” — and now works as a personal assistant at a fancy graphic design firm. (Her boss is played by guest star Wanda Sykes.) Even Ilana manages to get herself together professionally, snagging a coveted gig as a waitress in the city’s trendiest (and most brutal) restaurant. (Her sassy boss is played by guest star RuPaul.) Abbi and Ilana’s professional and personal lives continue to nudge them in different directions, culminating with the season finale; Abbi completely forgets about their “Friendiversary” and scrambles to make it up to Ilana.

I don’t totally mind when Broad City takes a break from the hijinks and explores the real-er side of its protagonists lives. I especially appreciated that Ilana still carries some scars from her breakup with Lincoln the previous season; I would’ve been disappointed if the show completely moved on and pretended that didn’t happen. (Buress doesn’t appear as frequently as he used to, but I like that the comic continues to make time for Broad City, even as his star keeps rising.) And in a reflection of these darker times, one of the character’s suffers from seasonal affective disorder related to the current political climate (The word “Trump” is amusingly bleeped out as if it were a curse word.)

That being said, this season of Broad City didn’t click with me as strongly because — even when the show put the more serious stuff aside — it simply wasn’t as funny. The show’s best asset has always been the bond between Abbi and Ilana, which is both singular and totally relatable to anyone with a best friend. (Although Ilana isn’t shy at all about showing off her other assets this season.) Too often in season 4, Abbi and Ilana feel separate in a way they’ve never felt before, even when they’re occupying the same space. (In Ep. 8/“House-Sitting,” the friends are in the same luxurious Hamptons home but their storylines barely cross paths.) That’s probably why my favorite episode of the season is Ep. 7/“Florida,” given that Abbi and Ilana are forced to unite to survive a visit to the Sunshine State. (Ok, fine…it’s also my favorite episode because I live in Florida and appreciate all the jabs at our unique brand of weirdness.)

Broad City: Season 4 contains all 10 episodes on two discs. Special features include “Hack into Broad City” segments, a “Behind Broad City” featurette, and Deleted & Extra scenes. Even though season 4 was somewhat of a downer, this is still a show that can start things off with an episode devoted to a rom-com like Sliding Doors and wrap things up with an homage to Alfred Hitchcock’s Rear Window. Broad City has already been renewed for a fifth season, and I’m very much looking forward to seeing the next chapter of Abbi and Ilana’s relationship…here’s hoping they go through more of it together.