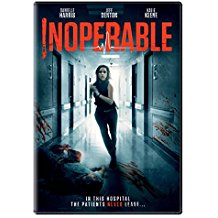 I always have a significant degree of excitement when watching a film that takes place in Florida, especially when it is filmed in a place I either live or have lived. The Punisher (2004) was filmed in downtown Tampa, and Miami Connection (1987) in downtown Orlando and the University of Central Florida’s campus. To further explain this excitement, I even waited till 3 AM on a busy street in Seminole Heights, Tampa, hoping to get a chance to see a part of The Infiltrator (2016) when they began filming here. Inoperable does indeed take place in the Tampa area of Florida, but you really only come to understand that through the dialog. For all the audience knows, we could just be being told that we are in Florida, and we would be none-the-wiser. While that doesn’t take away my enjoyment from the film, it certainly would have helped if it actually looked like Tampa.

The film takes place in a hospital while a large hurricane is happening outside (so realistically, the one thing that lets us know it is Florida is the impending threat of inclement weather). While in the hospital, Amy (Danielle Harris) is plagued by a series of nurses and doctors assaulting her, the sight of grotesque surgical experiments, and of course a time loop so that her experiences are repeated, adding to the nightmare. So, imagine Groundhog Day, but with less Bill Murray and more gory scenes. While trapped in this time loop, she meets Ryan and Jen, who learn they are trapped in the loop as well. Together, the group discover clues that might help them escape.

Now, I did enjoy this film. However, my main issue is its overall narrative. The film has a great ending, it’s just a matter of how they get there that becomes tedious. Amy cycles through a time loop, yes, but the loop feels lazy. We are either stuck in a traffic jam or stuck in the hospital, with no explanation of how we got from one place to the other. This plot device serves the ending of the film quite well, but until you get there, it is quite frustrating to watch the main character jump back and forth temporally, with no explanation as to how or why. All of the scenes with the traffic are used to either call 911 or to look for clues about the hospital. So, it is always narratively interesting when a character is aware of the time loop they are trapped within, but I can’t say it is interesting to watch said character dial 911 over and over and over with the same result.

The film’s greatest strength is the simplicity of its set design. The walls in the hallways are barren, leaving the audience to appreciate the intricacies of the more detailed rooms in the hospital. Specifically, the scene in which a character is forced to watch an operation. The contrast between the rooms cluttered with hospital paraphernalia and the empty halls that are traversed from scene to scene aids in the film’s overall tone and narrative.

The ending scene of the film is definitely my favorite part. It gives a fresh spin on the Groundhog Day type plot, and it features a spectacular performance by Danielle Harris. I will not spoil the ending, but I will say that fans of Harris’s acting in horror films will rejoice in the final few moments. The scene cannot be any more than 40 seconds long, but it features Harris running towards the camera in slow motion, wearing one of the most intensely sinister looks on her face. It makes the film worth every minute that precedes it, even if you get tired of the repetitive nature of the film.