Posted in: Disc Reviews by Brent Lorentson on February 22nd, 2018 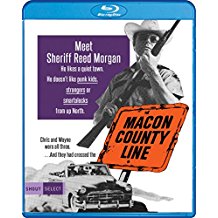 The days of drive-in cinema and grindhouse pictures are all part of a bygone era, where the films were fearless and took chances with their subject matter. Now films seemed to be made so carefully as to not offend anyone.  When it comes to Macon County Line, as much as it is a staple of its time, it’s hard to imagine this film being made today.  It’s a film that’s a blend of two genres. It’s a road film, but because of the location and characters, it’s also a good ol’ boy picture. So how does this drive-in classic fare on Blu-ray? Despite having a runtime of 88 minutes, the story doesn’t rush into anything but instead lets us get to know the two brothers Chris (Alan Vint) and Wayne Dixon (Jesse Vint) who are on a quick joyride before they enlist in the military. Whether they are hooking up with married women or doing a quick dine-and-dash for breakfast, the boys seem to always be on the run from something, whether it’s an angry husband or the police.  The Dixon brothers are far from your hardened criminals, but instead just a pair of guys enjoying their last days as civilians in 1954 Louisiana. Along the way they pick up Jenny (Cheryl Waters) a beautiful young hitchhiker the boys vie for affection over, but it never gets all that serious, because they know they don’t have much time left before they enlist.

The chemistry between the brothers is easy to see since they are brothers in real life, but the fun doesn’t last for long once Sheriff Reed Morgan (Max Baer) crosses their path.

Many will recognize Max Baer from his role as Jethro in The Beverly Hillbillies TV show. This film was Baer’s attempt to step out from the shadow of the Jethro character and show he could be more than a bumbling hillbilly, and with Macon County Line he steps in not only co-writing the screenplay but also producing the film. While the character of Reed Morgan isn’t necessarily the villain of the film, he’s definitely one of the more complex characters whom we witness going through several dramatic shifts over the course of the film.

The main conflict of the film occurs more than halfway through the picture when a pair of lowlife drifters roll through Reed’s town and get into trouble, but it’s the Dixon brothers who mistakenly get caught in the sheriff’s crosshairs.

While the film’s pacing is more laid back and isn’t filled with fast cuts jumping shot to shot, this is a film that sits back allowing you to join in on the ride and watch as the events unfold.  From where the film starts to its shocking conclusion, it’s a ride that takes turns that are dark and unexpected. With several road films filling the screens in the 1970’s to help attract public interest in the film and hoping to fill some of the films convenient coincidences the film was marketed as a true story (which it is not). This marketing tactic has been used before, one of my favorites being The Texas Chainsaw Massacre, but in the case of Macon County Line the story almost feels believable that it could all happen.

Despite having a small budget and little to no action till the final act of the film, Macon County Line is one of the best films of its genre and is on par with Walking Tall and Billy Jack. The low budget and the long takes help ease the viewer into this world, and we get to know these characters and care about them. It’s a shame we don’t get films like this anymore, and if we do they seem to get lost in the shuffle of other major film releases.  This is very much a film that is timeless with its story while also functioning as a time capsule capturing a way of life that just doesn’t exist in a world where technology rules.

Macon County Line is presented in the aspect ratio 1.85:1.  The 1080p image is arrived at with an AVC MPEG-4 codec at an average of 30 mbps.  As a low-budget film it appears to be shot on 16mm, which gives the film some grain and lends to its aged look. The colors still manage to pop, and we get plenty of detail like at the gas station where we can appreciate the paint peeling from the doors and walls.  Shot with mostly natural lighting, we do get some deep blacks, but at times detail gets lost in the night shots.  For its age and the conditions the film was shot under, it is impressive how well the film not only turned out but has managed to hold up.

The DTS-HD Master Audio Mono track is what you’d expect.  With it only coming from the front, there is no need to turn on the surround sound with this one.  The dialog is clear, as is the film’s score, which can be a bit loud at times, but nothing that should have you reaching for the controller to adjust the volume.

Audio Commentary with Director Richard Compton: Even after all these years he seems to remember a lot about the production of the film, and he offers plenty of insight into how many of the scenes were shot on the film’s small budget.

Cutting the Line: An Interview With Tina Hirsch: (21:42) In the interview she looks back on her experience getting the job as editor and her other memories associated with the film.

Macon County Line: 25 Years Down The Road: (7:56) Here we get an interview with Max Baer as he looks back to what motivated him to do the picture.

For those who love the old drive-in movies this is pretty much a must-have to add to the collection.  Is the film perfect? No, but with these kinds of films you know you’re simply signing up for a 90-minute escape and a good time. This is perfect for a movie night with other film-loving friends when you want to have a marathon of Vanishing Point and Dirty Mary Crazy Larry. For those that are unfamiliar with this genre of film, Macon County Line is the kind of picture that can help inspire you to look beyond the big-budget fare in the cinemas these days and appreciate the glory days of cinema.

Brent Lorentson is a horror writer and film critic based out of Tampa, Florida. With a BA in Digital Film, he co-wrote and co-directed Scavenger Hunt. His short stories have appeared in various horror anthologies. In 2019 his short script Fertile Blood will be a part of the anthology horror film Slumber Party. He is currently working on his first novel A Dark and Secret Place set to be released in late 2019. Favorite Films: Taxi Driver, Fight Club, I Saw the Devil, The Wild Bunch, Dawn of the Dead, A Clockwork Orange, Pulp Fiction, Heathers, The Monster Squad, and High Fidelity.
Inoperable Daddy’s Home 2 (UHD Blu-ray) (4K)