Contest: Win When The Starlight Ends From Cinedigm 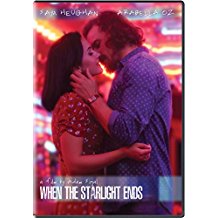 Cinedigm is releasing When the Starlight Ends on DVD this week. It’s the major motion picture debut of Arabella Oz, daughter of the famous television Dr. Oz.  A writer loses his muse only to find himself rewriting their time togetheer looking for a happy ending. You’ll have to separate real from fantasy with this one. To help you along, Cinedigm has sent a copy for a lucky Upcomingdiscs fan.

Gino Sassani is a member of the Southeastern Film Critic's Association (SEFCA). He is a film and television critic based in Tampa, Florida. He's also the Senior Editor here at Upcomingdiscs. Gino started reviewing films in the early 1990's as a segment of his local television show Focus. He's an award-winning recording artist for Omega Records. Gino is currently working on his 8th album Merchants & Mercenaries. Gino took over Upcomingdiscs Dec 1, 2008. He works out of a home theater he calls The Reel World. Favorite films: The Godfather, The Godfather Part II, The Body Snatcher (Val Lewton film with Karloff and Lugosi, not the pod people film), Unforgiven, Gladiator, The Lion King, Jaws, Son Of Frankenstein, The Good, The Bad And The Ugly, and Monsters, Inc.
Thor: Ragnarok A Bond Unbroken