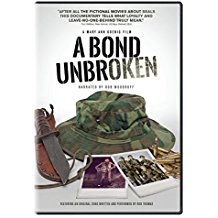 Though I’m not a SEAL nor a member of this branch of service, I am still able to attest to the truthfulness of the statement. Normally, the foot soldier is not privy to the bigger picture. Without that knowledge, you must find your own reasons to fight. That signal purpose that you will end up holding onto and reminding yourself of on a day-to-day basis in order to survive the difficulties that you will face. Loyalty to a guy going through the exact thing is usually one of the popular tethers. I know it was for me. It’s a powerful thing that bonds a unit. A Bond Unbroken, a documentary focused on the Vietnam War, takes it a step further, showing that very loyalty can be extended to people that aren’t even in your unit or branch service.

The film focuses primarily on a translator for the United States Navy named Minh during the Vietnam War. Intercut with interviews from former SEAL team operators that knew the man, we glimpse an individual who risked everything to aid United States soldiers during the war and was ultimately left behind when we withdrew from the country. The film is also put together with archival footage in order to better let the audience understand the seriousness of the war. More than a dozen interviewees came together to share detailed accounts of how instrumental to their operations Minh was. It is impossible to listen to these firsthand testimonies and not respect the man for his heroics, especially after hearing about how he sustained critical injuries following a grenade attack and continued to assist with future operations.

During the latter half of the documentary, I began to experience melancholy after learning that despite all his contributions, Minh was not granted asylum and ended up in a prison workcamp for two years. This feeling continued as I listened to all the interviewees talk about how they were sure that Minh was put to death following the U.S. withdrawal. Fortunately, things did end on a high note with a reunion of sorts.

This was an interesting subject told from a unique perspective that allowed me to remain engaged in the story, which is a rarity for me when it comes to documentary. Also on the plus side, there was enough historical data and firsthand accounts that I was able to gain additional knowledge about the Vietnam War that I did not possess before. By making the story of Minh the focal point, it humanized the historical information because it broke it down to the level of a common man.

I fully recommend this documentary, especially if the Vietnam War is of particular interest to you. If not, it is still a very compelling story about an extraordinary individual and well worth watching. Truthfully, I believe A Bond Unbroken should be required viewing in history classes.

Jeremy Butler is a film school graduate of the International Academy of Design and Technology. He is been writing for Upcomingdiscs since 2012; however, movies have played a big part of his life for much longer. Favorite genres include horror, science fiction/fantasy, and comedy. Favorite movies are V for Vendetta, Boondocks Saints, Kiss Kiss Bang Bang, and The Godfather.
Contest: Win When The Starlight Ends From Cinedigm Tuesday Round Up: March 13, 2018