Upcomingdiscs was at the Tampa premier of Followers. I found the film to be quite good and a nice turn on the found footage format. Director Ryan Justice delivered and the home-field crowd stuck around to hear him and other cast and crew members. The house remained full even at 1:00 AM. The film still has the rest of the week to run in 10 cities across the nation. If you are in one of those towns I highly recommend you get yourself a seat. (Check below for a screen near you. Just click on the image to get a better view.) I’ll be covering the film in more detail in the weeks to come. I was lucky enough to be invited to hang out with Ryan and film star Nishant Gogna over beer and iced tea while they prepared for the big night. Now you can sit in on some of my conversation with Ryan Justice. Just bang it right Here. 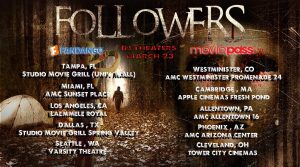 Gino Sassani is a member of the Southeastern Film Critic's Association (SEFCA). He is a film and television critic based in Tampa, Florida. He's also the Senior Editor here at Upcomingdiscs. Gino started reviewing films in the early 1990's as a segment of his local television show Focus. He's an award-winning recording artist for Omega Records. Gino is currently working on his 8th album Merchants & Mercenaries. Gino took over Upcomingdiscs Dec 1, 2008. He works out of a home theater he calls The Reel World. Favorite films: The Godfather, The Godfather Part II, The Body Snatcher (Val Lewton film with Karloff and Lugosi, not the pod people film), Unforgiven, Gladiator, The Lion King, Jaws, Son Of Frankenstein, The Good, The Bad And The Ugly, and Monsters, Inc.
Pitch Perfect 3 (UHD Blu-ray)(4K) Star Wars: Episode VIII: The Last Jedi