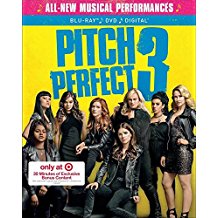 “I respect that you love your group, but it’s time for you to move on.”

The first Pitch Perfect movie arrived in Fall 2012 as a goofy, energetic, underdog surprise that charmed audiences with its funny jabs at (and genuine affection for) a capella music. But as the trilogy (allegedly) comes to a close a little more than five years later, the only quality that this popular, profitable franchise managed to retain from that previous sentence was “goofy.” The saucy tagline for this movie is “Last Call Pitches,” and everyone involved seems ready to hang up their pitch pipes.

“I would do anything to sing with you guys again.”

The movie begins with a bang…literally. The Barden Bellas — the all-female a capella group that previously won collegiate and international competitions — are performing aboard a yacht before chaos ensues and the vessel explodes. (Yes, I’m serious…we’ll get back to that in a bit.) The action flashes back to three weeks earlier with the Bellas adrift. They have all graduated college, and Beca (Anna Kendrick) seems to have her dream job as a music producer. Unfortunately, the job — and post-college life for the other Bellas, in general — isn’t all it’s cracked up to be. So when the Bellas get an invitation from current Bellas leader Emily (Hailee Steinfeld), they jump at the chance. The result is yet another indignity for the girl group.

“So there is a competition…I knew it!”

Luckily for them, former head Bella Aubrey (Anna Camp) arranges for the group to join an overseas USO tour thanks to her estranged Army officer dad. Naturally, there’s a competition element to the performances: the winning group gets to become the opening act for DJ Khaled (playing himself). Meanwhile, Beca develops an awkward chemistry with Khaled’s music producer, crazily devoted Bella Chloe (Brittany Snow) begins flirting with handsome soldier Chicago (Matt Lanter), and force of nature scene-stealer Fat Amy (Rebel Wilson) reconnects with her own estranged father (John Lithgow). But in order to win their latest competition and remain relevant, the Bellas are going to have to take down their most formidable foe yet: musical groups who play instruments!

Of course, the true major threat for Pitch Perfect 3 is the nagging sense that absolutely none of this needs to be happening. Pitch Perfect was a modestly-budgeted, sneakily insightful surprise hit, so I can understand the instinct to pump the formula up for a second installment. By the time the more hollow Pitch Perfect 2 arrived in 2015, the first film had become something of a sleeper favorite among young audiences which helped make the sequel a smash. (It earned $184 million in the U.S. alone against a $29 million budget.) So to summarize: Pitch Perfect 2 was made because people really liked Pitch Perfect, while Pitch Pefect 3 was made because, um…Pitch Perfect 2 made a boatload of money, so why not?

The problem is the strain to justify this movie’s existence shows. Whereas the series previously had a dorky charm, Pitch Perfect 3 is cynical in tone and a little too eager to look down its nose upon some of the series’ signature moments: a plastic cup makes a cameo before being immediately knocked aside, and even the signature riff-off here is met with side-eye.

What’s even more baffling is that the usual Pitch Perfect underdog spirit is inexplicably replaced by a half-baked action movie subplot involving Fat Amy’s scoundrel dad trying to get his hands on her $180 million fortune. I wish I were kidding, and this storyline is so cringe-worthy that even John Lithgow — adopting an over-the-top Australian accent — can’t make it work.

With all that nonsense to deal with, the musical numbers are sort of an afterthought. Yes, we get some amusing non-a capella performances, but the only real standout is the climactic songs that represents an emotional and satisfying end of the road for the Bellas. And while the cast members clearly enjoy each other, the actors are stuck playing familiar notes.

Kendrick is a minor exception, as the previously too-cool-for-school Beca has fully accepted her status as an aca-nerd. Wilson’s role has grown with each film since Fat Amy/Fat Patricia is clearly the breakout character of the series. But while the performer gets in some amusing one-liners, a little Fat Amy goes a long way…and the more the larger-than-life character is on screen, the more grating she is. Elsewhere, Snow (with a mad glint in her eye) and Camp (type-A to he max) are doing more amped-up versions of their previous work. Hana Mae Lee’s absurdly soft-spoken Esther finds her voice, which is what counts for growth is this movie.

John Michael Higgins and Elizabeth Banks also reprise their roles as John and Gail, the relentlessly insulting a capella commentators from the first two films. The flimsy excuse for them to be in this movie is that they are tailing the Bellas to film a d’acamuntary. The biggest indictment of Pitch Perfect 3 is that, at this point, John and Gail’s casually cruel barbs about the Bellas being past their prime and irrelevant are meant to be ridiculous…but they’re just true.

Pitch Perfect 3 is presented in an aspect ratio of 1.85:1. The 2160p image is arrived at with an HEVC MPEG-4 codec at an average of 45 mbps. This is a bright, sunny presentation and not just because the story is largely set in bright, sunny, picturesque locales like Spain, Italy, and the south of France. Colors (for the Bellas’ costumes, in particular) are bold and the image is clean. (The most noticeable hiccup is a CGI explosion.) Black levels are impressively inky, which is important since the film’s musical climax — not to mention its cringe-worthy, action-heavy opening sequence — take place in the Pitch black of night. Overall, though, the tone here is light and poppy, and this vibrant HD presentation matches it nicely.

The DTS-X track defaults to a strong DTS-HD Master Audio 7.1 presentation. The result is a formidable and impressive wall of sound for the musical performances. I was surprised by how much of the vocal parts remained in the front speakers, while the rears were mostly used for crowd and other ambient noises. Of course, the fact that this presentation boasts a few extra channels allows for that luxury while still offering some interesting dynamics for the vocals. Unfortunately, the musical performances feel like they don’t come as frequently as they did in the previous two Pitch Perfect movies. And when they do arrive, they feel a little abbreviated. So what we’re left with is a powerful track that is a little overqualified for such a goofy comedy, even though this franchise capper does boast a big explosion and some fisticuffs.

New Musical Performances: (4:24) More like “new-ish,” since these are actually longer versions of two existing numbers from the movie. Fat Amy joins her dad for a duet on stage at a casino, while the Barden Bellas sing a lullaby for the group’s first Baby Bella. Features a Play All option

Extended Musical Performances: (8:50) A longer look at the Bellas’ three rival groups in action during the USO tour. Features a Play All option.

Deleted Scene — Aubrey at Amy’s Hotel Door: (1:01) Fat Amy (unsuccessfully) tries to hide her awkwarddness from Aubrey after she gets a clue that her scoundrel dad is somewhere nearby. A total throwaway of a scene.

Competition Crescendo: (6:37) A featurette dedicated to the Bellas’ rivals — all-female rock band Evermoist, rap duo Young Sparrow and DJ Dragon Nutz, and country group Saddle Up — along with the performers who brought them to life.

A Capella Action: (3:15) For some reason, the people behind this goofy musical comedy series decided it’d be a good idea to add fight scenes and explosions. This featurette largely focuses on the extravagant yacht set where most of the butt kicking takes place.

The Women of Pitch Perfect 3: (4:21) In addition to paying homage to the actresses who play the Bellas, this featurette spotlights director Trish Sie, producer/co-star Elizabeth Banks, and other key women behind the camera.

Don’t Mess with Rebel: (4:27) An inside look at Rebel Wilson’s fight/stunt training. The actress actually seemed to take this seriously and ended up acquitting herself pretty well.

The Headliner — DJ Khaled: (3:01) The real-life superstar record producer/DJ takes us behind-the-scenes and hypes up the project.

The Final Note — John and Gail (2:22) A too-quick look at the Statler and Waldorf of the Pitch Perfect franchise as they set out to make their d’aca-muntary in Pitch Perfect 3.

Just Because He’s a Bad Guy…: (1:54) This featurette, which focuses on John Lithgow’s deceitful dad Fergus, is even more of a ripoff than the meager John and Gail featurette.

The Final Performance: (4:30) Everyone involved seems to believe this film is the franchise’s swan song, so there was a lot of pressure to make this climactic musical performance special. Cast and crew talk about all the work that went into picking the right song, location, etc.

Freedom! 90 x Cups Official Music Video (2:36) In true Pitch Perfect fashion, this video mashes up the crucial song from this film’s finale with the tune from Beca’s audition when she joined the Bellas. (And which gave Kendrick a pop radio hit a few years back.)

Hollywood of the South: (2:28) The movie makes pit stops in Spain, Italy, and France…but they were all recreated in Atlanta. This featurette reveals some of the tricks for transforming the ATL into sunny European locales.

Feature Commentary with director Trish Sie: The filmmaker is enthusiastic throughout and extremely complimentary of her cast. I suspect she hasn’t done very many of these, though, since she tends to fall into a pattern of simply narrating what’s on screen. (“Here are the ladies singing…”)

Feature Commentary with producers Paul Brooks and Max Handelman: This producer’s commentary offers a little more production detail, while still mixing in playful jokes. (Handelman is married to producer/star Elizabeth Banks.) If you can only listen to one commentary track, I’d recommend this one…even though the producers compare the Bellas in Pitch Perfect 3 to The Avengers. (They’re clearly joking, but it’s still not clear why anyone thought it was a good idea to half-assedly make this an action movie.)

Pitch Perfect 3 didn’t sing at the box office in quite the same way its predecessor did, so maybe this really is the end of the line…for now.

In my opinion, the series has only gotten more grating as it’s gone along, so I’m good with this being the swan song for the series. (At least until the inevitable reboot about 10 years from now.) The good news is this Universal release features a strong A/V presentation and plentiful (if not always substantive) extras that acknowledge the end of this aca-era