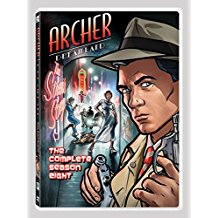 With Archer Season 9 Danger Island getting ready to debut in April, Season 8 of Archer titled Dreamland makes its way onto DVD, for many to binge and catch up before the season premiere. I have to admit it took me a while to finally give this show a chance.  Last year I had the opportunity to review Season 7, and honestly, ever since I have been a fan.  What’s bothered me, though, is how could the show continue following the way season 7 ends?  Let’s face it; things were looking grim for the former world’s greatest secret agent, Sterling Archer (H. Jon Benjamin), so where does the show go from here?

The season kicks off with Lana (Aisha Tyler) and Mother (Jessica Walter) sitting at Archer’s bedside in a hospital while he remains in a coma.  Rather than have Archer magically awaken from his coma, the show instead goes into Archer’s mind, which leads us into Dreamland.  It’s 1940’s Los Angeles, and immediately we see Archer as a PI discovers that his long-time partner, Woodhouse, has been killed.  This may be the greatest way a show has done a sendoff of a character and voice actor, since the show’s voice actor for Woodhouse, George Coe, passed on in real life.  The character is missed in the show, but there are some genuine touching moments as Archer takes a break time to time to lament his partner’s passing.  This doesn’t mean the show is a Debbie Downer, but instead it does seem to be darker than the previous seasons and full-on embraces its Noir undertones.

Because we’re inside Archer’s head, we still get the familiar characters, only we see them taking on different positions.  Lana, for instance, is now a seductive lounge singer, Mother is a crime boss, while Figgis (Chris Parnell) and Poovey (Amber Nash) play corrupt cops.  The new direction we see these characters take early on in the season and throughout shows that by no means are the writers running out of steam when it comes to telling a good story and inserting plenty of laughs.

This season has Archer being hired by a heiress, Cheryl Tunt (Judy Greer), who wants to fake her kidnapping, and very quickly Archer finds himself in way over his head while he still attempts to find out who murdered his partner.  This case gets him involved with gangsters, incestuous millionaires, and even killer robots, all of which he has to deal with without any sleep, which he happily reminds us about every chance he gets.

It’s hard to really pick out a favorite episode; the season is only a tight 8 episodes and really plays out like a long film, which lends itself to easy binge watching.  As for favorite moments, the season is filled with them. From the Terminator 2 references with the robot, to everything Archer is put through to deliver a missing finger, to the simple sight gag of a cat that always is cleaning itself, the show goes all over the place.  As the season wraps up, there are a few moments where the show does suddenly get into some dark territory, but that’s one of the pluses I found with this season, that it was willing to take some chances.

Over the course of Dreamland, we do see that Archer is haunted by flashbacks to his time serving in the war, and from what I’ve read, the next season will take us to 1939, so I’m excited to see the show continue this direction. It’s nice to see an animated show that is geared towards adults that doesn’t seem to talk down to its audience.  The show actually manages to sprinkle in some obscure jokes from time to time that even ask the audience to use their brain from time to time so they can be involved with the joke. Archer may not be perfect, but if you’re tired of Family Guy and enjoy a little action, Archer is a show I can’t help but recommend you give a shot, and the best thing is it’s a show you can easily pick up and not be required to have seen the previous seasons.

Brent Lorentson is a horror writer and film critic based out of Tampa, Florida. With a BA in Digital Film, he co-wrote and co-directed Scavenger Hunt. His short stories have appeared in various horror anthologies. In 2019 his short script Fertile Blood will be a part of the anthology horror film Slumber Party. He is currently working on his first novel A Dark and Secret Place set to be released in late 2019. Favorite Films: Taxi Driver, Fight Club, I Saw the Devil, The Wild Bunch, Dawn of the Dead, A Clockwork Orange, Pulp Fiction, Heathers, The Monster Squad, and High Fidelity.
Star Wars: Episode VIII: The Last Jedi The Good Fight: Season One