The Good Fight: Season One 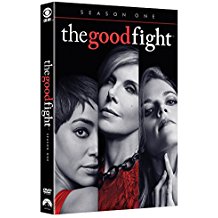 Curious what happened to Diane Lockhart after slapping the taste out of Alicia’s mouth? Well, I wish I could say that all was well, as tragedy strikes again just as she is on the cusp of retirement. That’s where we find Diane at the start of The Good Fight.  I had heard rumbles about the show shortly after news that it was moving into production, the spin-off series that would focus on the powerhouse that is Diane minus Julianna Margulies’ character. More interesting was the decision to make the series only available on the CBS’s streaming service. Clearly, streaming service has become a big part of home entertainment, so naturally it was only a matter of time before the networks joined the party in order to compete. However, I must admit that I was skeptical about shows only available through these means, as I doubted that the content was truly worth the price of admission. I must confess that after watching the series, I am tempted to sign up for a subscription. The Good Fight actually turned out to be one of the most well-written and clever legal dramas that I have ever seen. This is made more impressive by the fact that I am not the target audience, but my wife is, and let me tell you, once we started one episode, she wouldn’t stop until we had watched them all.

Picking up some time after the events of The Good Fight, Diane is motivated to make a change following the inauguration of Donald Trump. She decides that it is time to retire as name partner of Lockhart, Deckler, Gussman, Lee, Lyman, Gilbert-Lurie, Kagan, Tannebaum, & Associates (yeah that’s quite the mouthful, but notice whose name is at the front), her prestigious law firm, and plans to purchase her dream home. Wrapping up her last case, she must bump heads with Adrian Boseman (Delroy Lindo), a well-respected attorney representing the victim of police brutality in Cook County. This case brings her in direct contact with her former employee, Lucca Quinn (Cush Lumbo), which reopens old wounds about a certain someone (Alicia).  Determined to go out on a win, Diane plays hardball, but Adrian, who has something to prove, does not make it easy for her.

Assisting Diane is her goddaughter, Maia Rindell (Rose Leslie, Game of Thrones), a newly minted lawyer and daughter of billionaire financial advisor Henry Rindell, who responsible for handling the finances for Chicago’s elite, including Diane. While trying to reach a settlement on what is supposed to be her final case, news breaks that Henry has been arrested for running a Ponzi scheme, effectively bankrupting hundreds of people, including Diane. With her dream snatched away from her, Diane is left without a place to land after being considered fruit of the poisonous tree due to her directing people to invest with Henry’s hedge fund. Maia is also left devastated, as she is caught up in her family’s scandal and tried in the court of public opinion as a co-conspirator. Redemption comes in an offer from Adrian to join his firm. It’s not her name on the door, but as we all know that is only a matter of time for Diane. The road won’t be an easy one, as it will be a good fight (pun intended) to regain what she has lost as well as attempt to overcome many obstacles, including her working relationship with Lucca. Maia is also in for one hell of a fight, as she weathers the media and legal fallout of her family’s action, all while attempting to make name for herself in the legal field.

As I mentioned, I am not the target audience, but I am glad that I got to review this series. Going into this, I had only a vague knowledge of the show’s television universe. Basically, only what I gleaned from commercials. Fortunately, the series does not spend a lot time dwelling on the past, choosing to establish itself as an independent show from the very first episode. Speaking of the first episode, this was quite the opener. It is opened up the series nicely and established a story arc that continues all the way to the series finale. In addition to this story arc, the show employs a “monster of the week” TV theme, featuring a new legal class with every episode.  Interestingly, the most important relationship of the series does not feature Diane. This relationship somewhat mirrors the relationship Diane had with Alicia in the previous series, the friendship of Lucca and Maia. From the very first episode, Lucca established herself as trusted colleague and valued friend to Maia in her time of need. That one-sided conversation that the two had in the women’s restroom was inspired, and it was just the thing needed to set Maia on a path to not be anyone’s doormat. By season’s end, Maia is a forced to reckoned with, evident in when she went head-to-head with the Department of Justice big boss. Ladies, I promise that showdown will have you screaming ‘girl power,’ or least that’s what it did for my wife.

Rounding out the cast are a couple of guest stars who are transplants from the The Good Wife, including Carrie Preston as an eccentric but very capable attorney and Matthew Perry as Mike Kresteva, an attorney with the DOJ who sets his sights on bringing down Diane’s new firm. The breakout cast star for me was most definitely Diane’s assistant, Marissa Gold. She just appears on screen and takes control as she essentially hires herself into the firm’s employ, which is solidified when she presents the powerful attorneys with crucial material that they had been discussing just seconds earlier. She also shows an aptitude for investigative work, putting her in a collision path with firm’s current investigator (Nyambi Nyambi). The relationship began as antagonistic but quickly became a source of clever comedy, and perhaps something more further down the line.

There is a lot of emotion in this show, for the cast as well as the audience. No matter the circumstance, you are bound to feel one way or the other about something that is occurring on-screen. Whether it’s devastation at Diane’s misfortune, or sympathy for Maia when she realizes that her family isn’t the people she thought they were, or possibly elation or disappointment with the trials and tribulations of Lucca’s budding relationship with Assistant District Attorney Colin Morrello (Justin Bartha). No matter what is happening, you will become invested with these characters, and that is what makes this one of the most intriguing dramas that I have ever seen. I will confess feeling that the season’s conclusion was a bit lackluster with a twist that wasn’t really that surprising, but the other nine episodes hit the nail on the head and drove me to keep watching. Like I said, I am highly tempted to sign up for a CBS All Access subscription.

Jeremy Butler is a film school graduate of the International Academy of Design and Technology. He is been writing for Upcomingdiscs since 2012; however, movies have played a big part of his life for much longer. Favorite genres include horror, science fiction/fantasy, and comedy. Favorite movies are V for Vendetta, Boondocks Saints, Kiss Kiss Bang Bang, and The Godfather.
Archer Season 8: Dreamland Ready Player One